“I was only doing my job with those saves” – Murphy 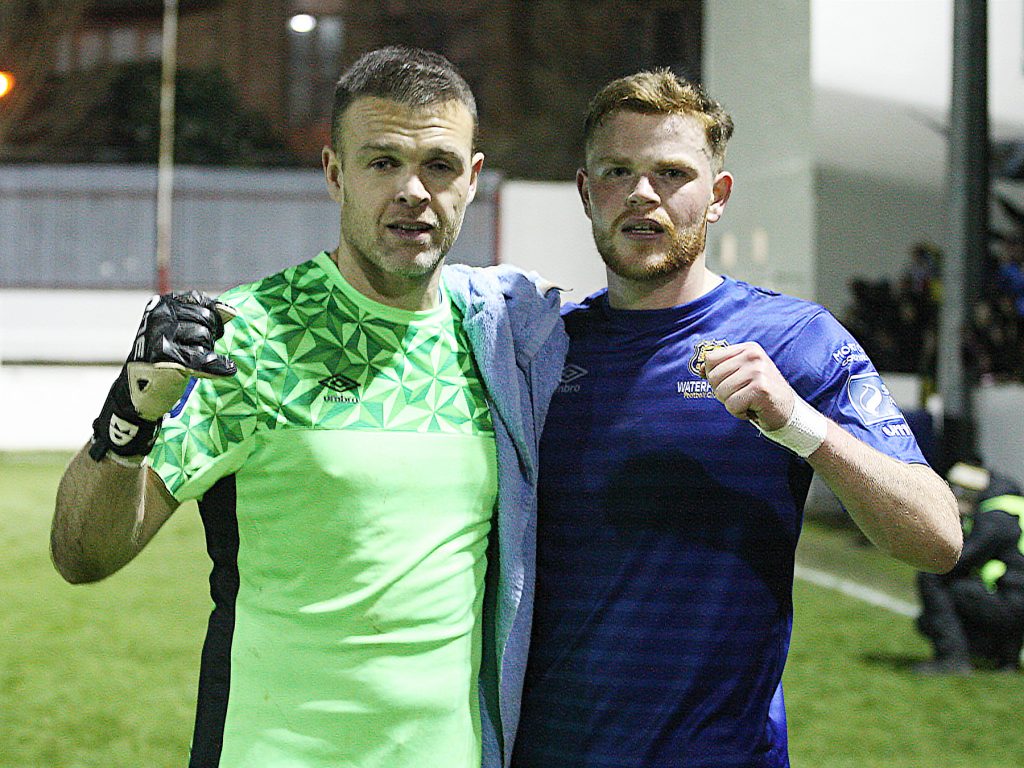 Man of the Match, Brian Murphy and Scott Allardice celebrate after the win over St. Pat’s on Friday night. Photo: Paul Elliott.

It may have only been the first game of the 2020 SSE Airtricity Premier Division season, but it was a result that meant so much to the players of Waterford FC as they got their campaign off to a winning start with a 1-0 win over St. Patrick’s Athletic at Richmond Park.
When you reflect on the 90 minutes that unfolded at the Inchicore venue, it’s still hard to fathom just how the home side didn’t manage to find the back of the Blues net, but the sole reason for that was Waterford native goalkeeper Brian Murphy, who put in an inspirational night between the sticks.
After returning to Ireland following a 20-year stint in England, Murphy was quite brilliant in keeping the home side at bay in this fiercely competitive battle with a string of second-half saves, two of them out of the top drawer, ensuring a cleansheet and a first win of the season for his new club.

DOING MY JOB
Speaking after the game, the 36-year-old netminder said, “It was a great performance and I was just doing my job with the saves I made. I think that the lads dug in especially in the second-half when we under pressure and it’s great to start the season with a win.
“When you think that the squad was literally thrown together and we’re still getting to know each other, it makes it that bit more surreal. It has been a hectic few days for me. I came home on the ferry on Wednesday and with the storms it wasn’t an enjoyable ride, but to be back playing and keeping a cleansheet is good.
“I missed that because I didn’t play in a while and hopefully, we can build on this result. As I said it’s a very young squad and I’ll be honest when I say that I think that I was calling the lads the wrong name for most of the game.
“That will stand to us going forward. It’s the first game and to get a win as a group so early – there’s no better feeling to be honest. I am hopeful that we can build on this and go into two tough games against Bohs and Shamrock Rovers at home next week.
“The positive is that we won’t be bottom come the end of the weekend so that’s a good one. I think that it’s important that we develop as a group. We need to get to know each other firstly and then see what we’re good at, what we’re not good at and build going forward.”

COUPON BUSTER
“We’ve got a small enough squad and we need injuries to stay away from the camp. I think that we’ll need a little bit of luck, a little of effort and if we get that I think that we’ll build on it. I read so many papers today where nobody gave us a chance. They all predicted that St Pat’s would win. It’s a coupon buster for people.
“We’re here to perform and do our best for this club. I think people saw that tonight. It was hectic stuff at times defensively, but we’ve come out on the right side of things. It’s a good honest group of players we have here, and we’ve got to stick together. We’ve got to dig in and see where we can go.
“The squad is so late getting together, and this result is a big positive. I think that the way St. Pat’s play and the pitch isn’t the best that they made a mistake at the back. I thought that they overplayed at times and with the willingness of the lads to close things down, we forced the mistake and Kevin was there to finish.
“It will be a nice little trip down the road for everyone. We need to now look forward to the next game against Bohs. I have some great memories of my time with Bohs before going to England, but that’s the past. I’m now focussed on Waterford and doing well here. It’s great to be back playing, keeping cleansheets because I missed it.”