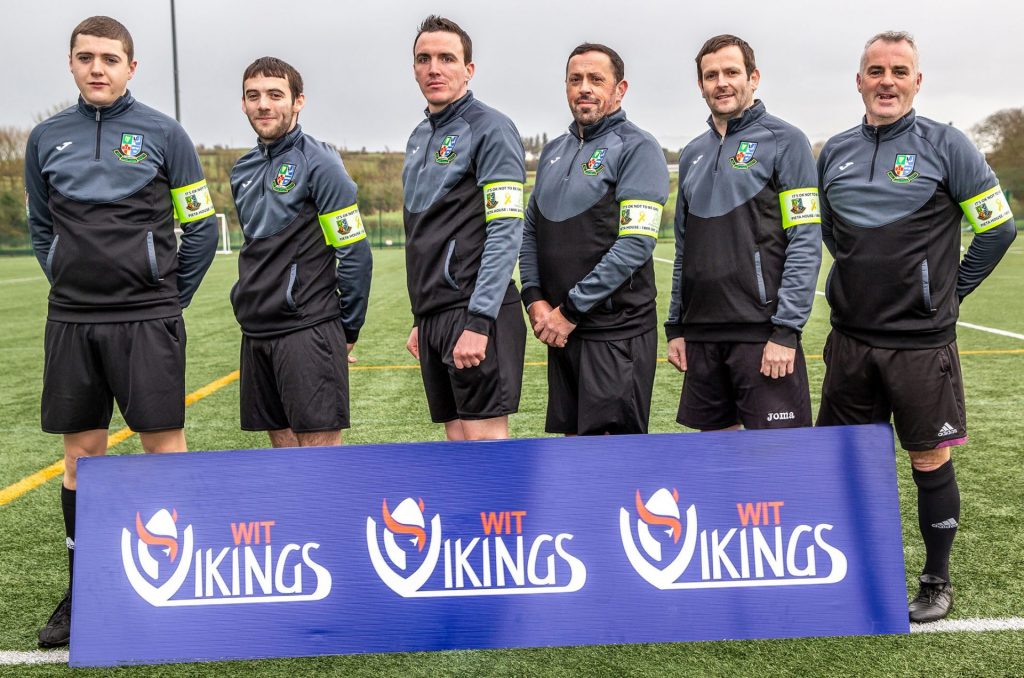 The Waterford Branch of the Irish Soccer Referees Society have launched their new United Against Suicide campaign that will see match officials raise awareness by wearing armbands advertising the Pieta House contact details during matches.
With suicide becoming an epidemic across the country, the soccer community locally has been affected by this devastation in recent times, which has left many clubs and players deeply upset.
After losing a member of my own family, who was also a well-known referee in the past, through suicide, you see first hand the pain and hurt that impacts the lives of those left behind so this decision of the referees to highlight the support network should be applauded.
Local club Carrick United also have a United Against Suicide campaign for the last number of years and the man that brought that into the club, Eamonn Russell, has now with the support of his refereeing colleagues launched this initiative.
Speaking to the Waterford News & Star, Eamonn said, “I think that it’s a subject that touches us all not only in the soccer world, but in the wider sporting community. Here in Waterford and the surrounding areas, many of the clubs and players have been affected by losing valuable people because of suicide.
“It not only impacts on the players though as many referees have lost friends because of it so we felt it important at a time where people are struggling in life that there is help there through Pieta House. The society are happy to launch this Suicide Awareness campaign.
“The reason why I set it up was because of the amount of suicides that we’ve suffered in soccer circles including a couple in the last year or so. I suppose personally it has touched me because of losing a good friend of mine that I grew up with.
“It’s not just soccer that this is happening in as competitors in other sports have taken their lives and I don’t think that there is a whole lot of support out there. We all know that the mind is a fragile tool at times and it’s important that we reach out and show our support.
“The idea itself follows on from the United Against Suicide campaign that I began with Carrick United in June 2017 that is still running now. Something like this has a major positive effect on people when they take part and I’ve had people come back to me to tell me just how much. It gets everyone thinking openly and supporting each other like a teammate should.
“On the other side with the society getting involved and personally pushing this themselves, I think it shows a human side to a referee which is something that a lot of people seem to forget they have. This is also something I’d like to highlight as we are all human and we all know how fragile the human mind is.”
If you or someone you know is going through a particularly tough time then take that first step and speak to someone. Pieta House South East – 051-858510 or Nationwide at 1800247247.