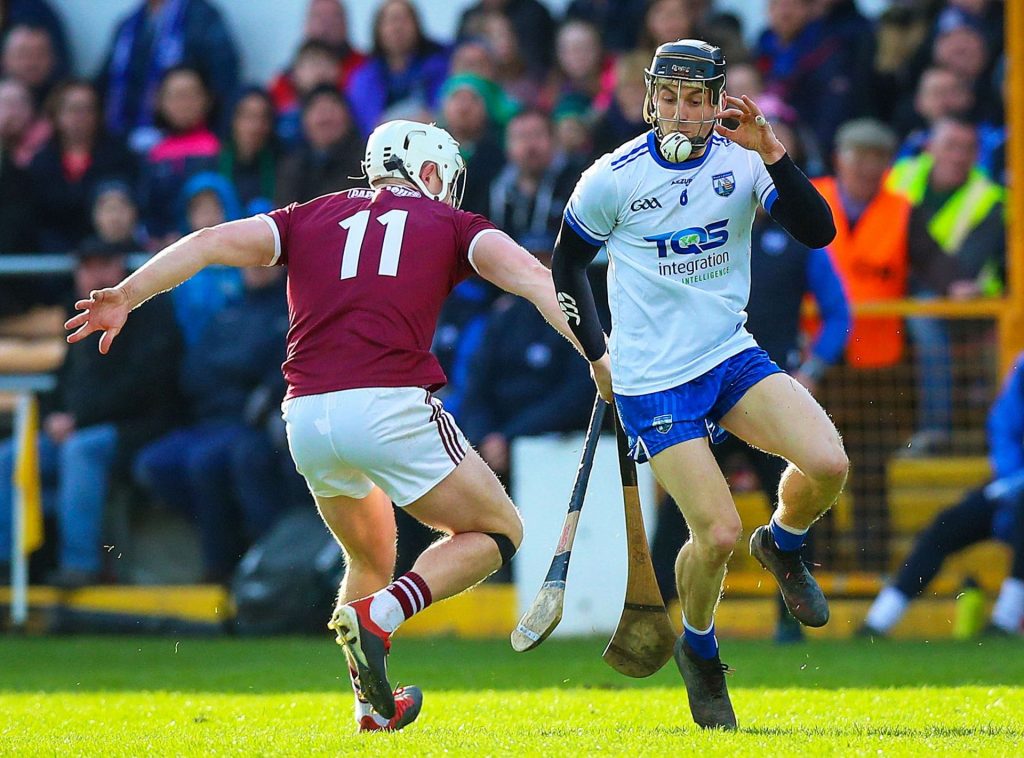 Waterford’s Jamie Barron and Galway’s Joe Canning in action during last year’s NHL Division 1 semi-final. The Fourmilewater man was named on the bench for the Limerick game and could make his first appearance of 2020 on Sunday against Galway. Photos: Inpho.

Galway will be guests in Walsh Park for the second year running in the Allianz League when they face the home side on Sunday next. With the league operating under the new format and a new two year cycle this will be the third league meeting between the teams in the past twelve months with Waterford seeking to repeat the success in last year’s home clash and the following league semi-final played in Nowlan Park.
Last year’s clash in Walsh Park was the first in the league between the teams since the 2017 quarter final in Pearse Stadium which Galway won by three points in dramatic fashion before going on to win the title. That league win was the springboard for Galway to go on and add the All Ireland title with victory over Waterford later that year. Since then the landscape has changed in both counties.
Galway lost their league and All Ireland titles the following year while Waterford failed to get out of Munster under the new championship format. Last year saw Derek McGrath departing the Waterford scene after five years in charge that produced a league title and an All Ireland final appearance to be replaced by Paraic Fanning. There was early promise for Waterford with the league wins over Galway in Walsh Park and in the subsequent semi-final either side of a quarter final win over Clare. However, the following League final defeat by Limerick and the failure to get out of Munster for the second year running saw Liam Cahill coming on board while at the same time Galway’s failure to come out of Leinster saw All Ireland winning manager Michael Donoghue calling time on his tenure and so Sunday next will see Limerick’s Shane O’Neill and Tipperary’s Liam Cahill in direct opposition.

WEATHER PLAYS HAVOC
The positions of both teams going into this game would have been much clearer had last weekend’s fixtures not fallen foul of the weather. Waterford go into this game knowing that with two away fixtures against Tipperary and Limerick to follow a win here would be essential to retain a chance of at least a third place finishing in the division and so clinch a quarter final place. Likewise, Galway, with two home games against Cork and Tipperary to follow and having already lost to Limerick, will see themselves in a very strong position to make the knockout stages if they can get a victory in this away tie.
What will be very interesting to see now is whether both managements will retain the teams they had named for last weekend’s games for this clash on Sunday next. There were a few surprises in the Waterford side named for the Limerick game in that Austin Gleeson and Jamie Barron were not in the starting fifteen after both had appeared to confirm their recovery from injury when playing a full part in the challenge against Wexford in Ferns the previous Sunday. Their omission could be seen as suggesting that both players may not have been one hundred per cent and that one further week would see them up to speed for the home game against Galway. All will be revealed with the announcement of the team on Friday.

CHANGES MADE
The Westmeath game apart, the team announced for last weekend showed three changes in personnel from the starting fifteen against Cork with Darragh Fives, Kieran Bennett and Dessie Hutchinson being replaced by Shane Fives, Kevin Moran and Pauric Mahony. The omission of Kieran Bennett, who was so impressive in midfield against Cork, is due to an injury sustained in training prior to the Westmeath game while Shane Fives retains the position he filled when coming on as a replacement for Conor Gleeson in that same game. Darragh Fives is replaced in the halfback line by Kevin Moran on the wing with Iarlaith Daly moving to the central position. Conor Gleeson is moved to midfield, releasing Jake Dillon to take over from Dessie Hutchinson in attack while Pauric Mahony is named as Kieran Bennett’s replacement in midfield. It is understood that there was some doubt about Jake Dillon starting against Limerick, though named, as a result of injury so it remains to be seen if that situation has changed by next weekend.
It is interesting to note just how things have moved on inside a year where both teams are concerned for Sunday’s game. The Waterford team named last weekend contained just six players who started against Galway in Walsh Park last year, namely Stephen O’Keeffe, Shane McNulty, Calum Lyons, Kevin Moran, Pauric Mahony and Stephen Bennett. On the other hand the Galway team, named to face Tipperary in last Sunday’s postponed game, contained just five of Galway’s starting fifteen on that day in the Mannions, Paraic and Cathal, Gearoid McInerney, Joe Canning and Conor Whelan.
Had Waterford played Limerick last weekend we would be drawing comparisons as to how our performance compared to Galway’s which saw them go down by 1-19 to 0-14 in the LIT Gaelic Grounds. The Galway team named last weekend showed five changes in personnel from that side so with places very much up for grabs we can expect a big effort from the Tribesmen on Sunday. Likewise, for Waterford it is very much the same as these are the games in which players are asked questions and must come up with the right answers if they are to nail down places in the team.

A CONFIDENCE BOOSTER?
Waterford will need a performance on a par with that produced against Cork to get the victory on Sunday. While Stephen Bennett has been carrying the responsibility for keeping the scoreboard ticking over the return of Pauric Mahony will see some of the load shared and it will be interesting to see how the free taking will pan out. With just two home games in the league this is a tie that the management will have targeted and with the win over Cork secured another home win on Sunday against a top tier team would be seen as a big confidence booster heading on into the home championship games against Tipperary and Cork.