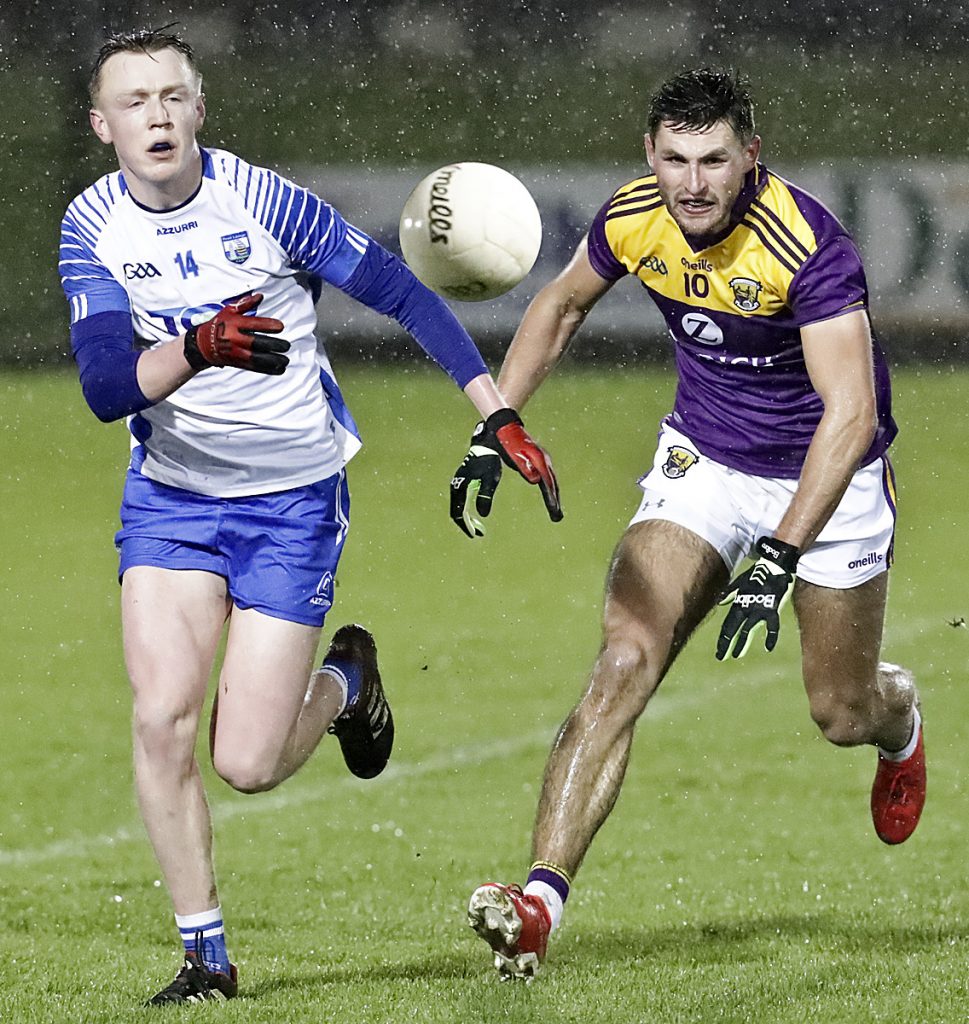 Waterford’s Brian Lynch hand passes the ball against Wexford’s Glen Malone during their Div. 4 National Football League game in Fraher Field. On Saturday the Déise travel to Sligo in search of their first win of the 2020 NFL campaign. Photo Sean Byrne

With three rounds of the Allianz League played Waterford’s footballers are still seeking a first win having lost games they might reasonably have expected to get something from. Home losses to Limerick and Wexford having been in winning positions were most disappointing while the poorest performance was away to Wicklow in a fixture that is always closely fought between well matched sides.
Given the exit of top players from last year’s panel at the start of the season it has to be appreciated just where Benji Whelan is with his current panel of players. He has a young committed group who are putting in a big effort and gaining experience and that is how it has to be looked at. While promotion has to be an objective at the start of the year it was always going to be a case of building for the future where this Waterford side was concerned. They have been competitive in their games to date without enjoying the best of luck and on Sunday they will face one of the sides fancied for promotion and will gain valuable experience.
Sligo were relegated to Division 4 last season for the first time since 2009 in which year they gained promotion after scoring a 0-16 to 1-11 win over Waterford in Markievicz Park. John Kiely’s side travelled to Sligo that weekend very much in with a chance of promotion with a victory and a home game against Antrim to follow. Both Shane Walsh and Gary Hurney were on the hurling panel at the time and both were released by Davy Fitzgerald to play their first game of the league campaign. John Kiely’s side were unlucky to lose out on the day but the ground work had been done for John Owens to come on board and deliver promotion the following year.
Wins away to London and at home to Antrim gave Sligo the start they wanted to their drive for promotion back to Division 3 but they suffered a setback last week in their re-fixed game with Wicklow when going down on a score of 1-15 to 1-10 in Aughrim. Sligo will now see this game as one they cannot afford to lose and will be all out to get their promotion bid back on track.

NOTHING TO LOSE
Waterford, for their part, will have nothing to lose going into this game. Promotion is no longer an option so it is all about bringing players on and looking to the future. The management’s options are clearly limited but the remaining games will provide opportunities for new faces to make their way into the side for the championship and so lay the foundations for a settled side to challenge in next year’s league. When one looks at the Waterford side and sees players like Brian Looby, James McGrath, Michael Curry, Dylan Guiry and Seanie O’Donovan as being the most experienced players the situation is put into perspective with such as Conor Murray, Darragh Corcoran, Jason Gleeson, Jason Curry and other young players just out of U-21 and now willing to step up to the plate.
Things will not happen overnight but they can happen with the patience and commitment of players and management that is there. Sunday’s game is another step along the road and the players will give their all as they have done to date and hopefully their luck will change.