“The labour capacity to deliver the necessary house builds is going to be a challenge.”

WATERFORD-born economist Jim Power has described the General Election manifestos ‘across the board’ as ‘a lot of fiction’.

Addressing the Construction Industry Federation’s (CIF) South East Construction Dinner at the Tower Hotel, the Clonea Power native said: “I really hope that none of those manifestos are ever implemented in a serious way”.

The economy, he stated, must withstand “external shocks to the greatest extent possible. The bottom line is we have a national debt of €205 billion at the moment. That is a lot of debt, it does create a vulnerability that we need to be very, very careful about”.

Mr Power said the “natural demand for housing did not disappear during the crash” but for about five years, “we built virtually nothing. When you look at the housing commitments in the various manifestos, on average the aspiration is to deliver around 200,000 houses over the next five years. Now I hope it is delivered but to put that figure in context, between 2011 and 2015, we delivered 29,200 houses so that’s an average of 5,840 houses per year. Between 2016 and 2019, while there was some improvement, almost 64,000 houses were delivered, that’s an average of just under 16,000 per year. Last year we built around 21,500 and there’ll be a further improvement this year but we’re still well short of the 35 to 40,000 (new annual builds) that the country requires. If you stop building houses for a five-year period, surprise surprise, you are going to have a serious crisis. Unfortunately and despite what part of the political spectrum is promising at the moment, it is not possible to turn on the tap and deliver the requisite number of houses overnight. It takes time and we need to stick with it, we need to make progress in that regard.”

Regarding the workers needed to deliver those new housing units, Jim Power said: “It’d be great to think that the capacity to deliver what is required is out there but then if you look at, on the supply side, the issues, what affects the economics of housing delivery? It’s the cost of land, it’s access to funding, particularly for smaller developers, it’s the interplay between the Central Banks and macroprudential mortgage rules and the cost of delivery, so there’s a basic mismatch there.”

“I think the labour capacity to deliver what is required is definitely going to be a challenge.” 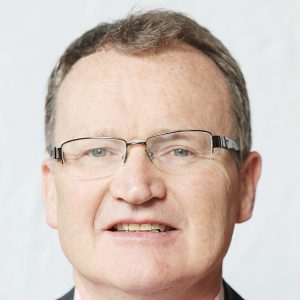 Economist Jim Power, who was keynote speaker at the Construction Industry Federation’s South East Dinner, held at the Tower Hotel on February 7.