THAT sound you heard all over Waterford last week was the sharp intake of 20,569 breaths when the David Cullinane speech hit the news. The faux media outrage at the idea that a shinner, to put it bluntly, celebrating a momentous occasion in Irish politics would shout political slogans to his own supporters, is frankly risible. What did they expect? Afternoon tea and cucumber sandwiches with no crusts?

The local constituency voted en masse for the man in the hope of delivering on Waterford’s real needs and breaking free from the economic stranglehold, imposed by FG with FF support, that the city has suffered from over the past nine years.  David Cullinane has to be in cabinet if SF is in government. The programme for government is being written and we may have lost our footing in the room if SF are serious about marginalising him, but it’s very unlikely that is the case, considering his huge vote and that his transgression was something close to their hearts.

My guess is they are in media management mode. Were he excluded for sloganeering, talking to Buncombe, there would be a seismic political anti SF reaction locally whose direction no one could foresee. As ever, events intervene. Events, dear boy, events!

It is not a certainty though that SF will be in government. The prospect of a Grand Coalition of FF/FG/Greens is also in the frame. Remember, FG got 24% of the vote in 2011. Three quarters of the country votes against them and they still formed a government supported by FF, which ended up being detested locally. People did not want FG in government in 2016. This time around SF has 24% of the votes and may not be in government. It is terribly hard to see what benefit accrues to FF or FG with Mary Lou McDonald as leader of the opposition. Now that Brendan Howlin has resigned as Labour Party leader, she would be the voice of alternative Ireland and could crucify the establishment parties on every housing, health and homeless failure probably leading to an even bigger SF vote next time out.

Planning permission (19853) was granted for a second UHW cath lab in January. No tender has appeared on the government procurement site although the project is listed in the HSE National Service Plan for 2020. Some local politicians have said the lab is “delivered”, but there is no sign of site activity.

This project has been dogged by political and policy failure. Certainty is needed from any incoming government that UHW’s Model 4 status is secure and will be built on.

The MRI at the hospital is at end of life and was scheduled for renewal in 2019. That was not done, and a second MRI is essential at the hospital.  A new MRI is being installed at St Luke’s Hospital Kilkenny. What’s the delay in Waterford?

A second CAT scan machine was installed at UHW some time ago but is unused because of staff shortages. The Palliative Care Unit at UHW is not really open, despite pre-election publicity to the contrary. People from the city who need palliative care are being shipped all over the region.

The existing cath lab at UHW is scheduled for renewal for some time, but apparently awaits the completion of a cath lab at UPMC Whitfield before it can be done. In all the talk about health matters during the election debates, there was little said about any attempt to bring UHW staff levels up to the levels prevailing in other Model 4 hospitals. The 900 staff difference between Limerick and Waterford university hospitals is a national scandal only explainable in terms of political influence.

Nice to read though that a 2019 HIQA report on maternity services at UHW found very high standards of care, with criticisms reserved for the physical environment and some staff training issues. Hospital management and staff deserve credit for that.

Despite blather from some sources, not a cent was spent on WIT teaching space in the past decade. Hundreds of millions have been hosed into every university in the land for new facilities and student accommodation. The Department of Education has crippled WIT by not enacting legislation allowing it to borrow low rate funding from the EIB.

€29m in blue sky funding dropped on Cork IT in the weeks before the election. A new DCU €50m STEM building got the go ahead recently, while the long awaited new WIT Engineering Building with planning permission (19669) since November 5 last has not started. What are FG and their cronies in FF thinking about third level education in this region other than protecting market share in Dublin and Cork?

Meanwhile, Mary Mitchell O’Connor, Pat Deering and Michael D’Arcy failed to get re-elected. Brendan Howlin has retired as Labour leader. He retires as a failure in my books. A stroke of his pen during 2011/2016 would have given WIT university status with enormous benefits for the South East. His parochial inability to see how WIT benefits his home county were always evident in his anti-Waterford stance.

Anyway, the lunatic supposed mergers of equals, IT Carlow led, with no funding/growth TU cheerleader group are weakened.  Waterford has renewed strength, with David Cullinane in a pivotal position, Mary Butler strengthened in a weakened but more powerful FF and O’Cathasaigh and Shanahan in the mix. We need a university of real substance in the South East rather than a cracked, stay in your RTC box, Tech Uni. A stroke of the pen in a programme for Government will decide our fate.

Walking around the old glass factory offices at Kilbarry is a salutary lesson. The dereliction is shocking and among the worst and most visible sites in the country. The Cork Road from Inner Ring to Claremont is littered with neglected or semi derelict property. Anyone approaching the city from this side forms a terribly negative view of Waterford city. Either Frisby Construction is going to develop the Glass offices or they are not. The site is intolerable and probably damaging the city in ways we will never understand. It’s really time for action as Waterford has no high spec Fintech space to offer incoming business. There is a similar story with the Wetherspoon’s sites in Broad Street and Arundel Square. The shops owned by the company are empty for years and cannot be improving while empty. Promises for development, year after year, have never been realised. Will this ever be resolved? 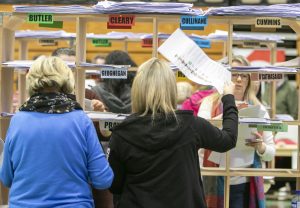