“The State should at least be building 10,000 houses itself around the country each year.”

WHILE acknowledging the absence of cranes from the Waterford skyline, the Director General of the Construction Industry Federation (CIF) believes there will be positive movement in the local building sector in the immediate to medium term.

Speaking to the Waterford News & Star at the Tower Hotel, which is currently being refurbished, Tom Parlon stated: “The Neville family are big construction people and I’m sure no-one in Waterford minds a Wexford family coming down and spending a few quid here (in the Tower Hotel). And I know from our MNE (Micro and Nano-Engineering) contractor that there are some big players in this area and that there have been quite substantial jobs in Bausch + Lomb and some of the other factories here in terms of substantial investment and I know there’s planned Middle Eastern investment (on the North Quays and Michael Street) which is very much still in the ether but we’re certainly looking forward to it. Any investment of that scale would have to be welcomed.”

The potential boost that the Falcon Real Estate Development project would “create a lot of jobs and a whole new infrastructure for the area,” said Mr Parlon, who attended the CIF’s South Eastern Construction dinner in Waterford on February 7.

“I actually came down from Dublin via Wexford, which wouldn’t be my regular route but I was anxious to see the new New Ross Bridge and it’s a fabulous new infrastructure delivery for the South East. The view you get coming into Waterford from that approach is just terrific and I feel Waterford city is now ripe for development.”

‘Getting on top of the housing situation’

As for what awaits under whatever government may be formed in the coming weeks, Tom Parlon said: “Clearly from an industry point of view, housing and infrastructure were very much to the fore during the general election campaign and there’s lots of debate and blame as to why certain things haven’t happened over the past few years but I believe myself that we’re getting on top of the housing situation now. Still, the biggest problem with housing is the finance to build houses and that remains a stumbling block.”

When asked what would be the single most positive change any government could implement to reduce such costs, Mr Parlon replied: “One of the proposals by both Fine Gael and Fianna Fáil is to increase the Help to Buy scheme, which is certainly a positive move. The fact that the government would get involved in building social houses itself, be it through local authorities or housing agencies, well that used to be the case and I believe the government would get very good value for that.”

He added: “There is also this new Land Development Authority to take into account; there is substantial State land within every local authority area and if the government builds on its own land, clearly that would cut out a great deal of the extra costs.”

Over the past two to three years, Waterford City & County Council has delivered turnkey – albeit relatively small-scale developments – in which payments to developers are only made upon completion. With larger scale projects currently in tow, the better times Tom Parlon suggested for builders and, more importantly, those seeking a home, are likely to be in greater evidence over the next two or so years.

A ‘potential bonanza’ for government

He continued: “The cost a building contractor will charge for building a house is only about 46 per cent of the overall cost. If you take a house that costs €300,000, the builder is getting is less than €150,000. Land, of course, is obviously a factor. Then there’s all the development levies, VAT and all the other professional costs to take into account. House building is a potential bonanza for the government given the amount of tax they can take in and it’s highly labour intensive as well. So being able to build on State land would certainly be a big positive factor.”

As for what was floated across the political spectrum during about new builds during the general election campaign, Tom Parlon contended: “Some of it was a bit pie in the sky. Last year, we did about 21,000 houses and the prediction this year is for about 25,000 – and building about four to five thousand more than we did last year is a fairly tall order. But the notion that you’re going to double it is just rubbish – it’s not going to happen. Yet it is realistic, I feel, to expect that the State should be building at least 10,000 houses itself around the county each year.”

On the wider question of affordability, Mr Parlon recalled: “Twenty or thirty years ago, a single teacher, on the strength of their own individual salary, could get a mortgage and build a house and pay for it. Now, two teachers together, on their combined salary, can’t qualify for a mortgage. Now there’s something a bit wrong with that. I know some commentators of late have been critical of the Central Bank and how they weren’t strict enough previously given the financial difficulty we got into (prior to the recession) but I think they’re gone a bit too far in the wrong direction at the moment. Whatever about not loosening the purse strings but adults – and I include my own kids in this – having a major difficulty in qualifying for a mortgage having worked for between 10 and 20 years and having to depend on either rental (accommodation) or living at home with their parents, that isn’t the way to go. So I hope there will be some enlightenment in that whole area.”

In terms of boosting construction levels, Tom Parlon noted: “I was in Intel (Leixlip, County Kildare) recently and they are spending €4 billion; there will be over 6,000 construction workers in Intel before the end of this year and that’s just one of the big projects that’s underway. It’s important that we continue to attract Foreign Direct Investment (FDI) into Ireland as well, and a stable government will certainly play its part in delivering a growing economy.”

Housing developments along the Outer Ring Road, with more to follow in the Ballygunner area, indicate some welcome momentum in the local construction sector. 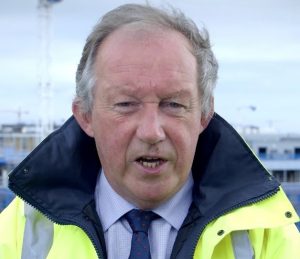 More From The Region