CITY & County Mayor John Pratt (Lab) congratulated all four elected TDs at February’s Plenary Council meeting in City Hall. “I’d especially like to congratulate the two elected from the chamber here, Councillor Marc Ó Cathasaigh and Councillor Matt Shanahan and I just want to wish them all the very best. I know that that all four TDs will work together for the betterment of Waterford city and county and I’d like to wish them well in their endeavours.” Cllr Seamus Ryan (Lab) added: “I would also like to congratulate the defeated candidates who also put themselves forward for Waterford.” Cllr Davy Daniels wryly added: “Hold onto the posters anyway.”

A motion to oppose any State commemoration of the Royal Irish Constabulary (RIC) and Dublin Metropolitan Police (DMP) won the unanimous support of City & County Council members at the February Plenary meeting.

The motion called on current and future governments “to oppose any State involvement in events commemorating the RIC and undertakes not to fund, support or collaborate in any attempts to commemorate the RIC or other forces that used violence to oppose Irish independence”. The motion also instructed the Mayor and Deputy Mayor “to refrain from attending or supporting any such event in the future”.

Over the past year and a half, Waterford City & County Council has commenced 20 Compulsory Purchase Order (CPO) procedures of properties, 18 of which have been completed according to Housing Director of Services Ivan Grimes. At the February Plenary meeting, he told Cllr Davy Daniels (Ind) that seven of those properties are being used and tenanted by Council tenants, two of the remainder are being adapted for severe disability cases” while nine of those properties have been put up for sale. One of the other CPOs was withdrawn after the owner undertook works to get the property occupied again while the last one “was leased to us by the owner after the owner carried out works and brought the property under Repair and Lease”. 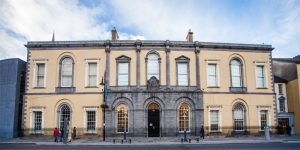