“I went into labour while dancing to Groove Armada!”

AN open front door greeted me on Clarke Road on Thursday morning last. I’m struggling to recall the last time I visited someone for an interview where a visible hallway was immediately in view.

It felt like a decidedly good omen. Over an hour later, as I bid farewell to both Gráinne and Darren Collins, that initial good vibe had indeed come to pass – and then some.

Daughter of Mary (nee Power from the Cork Road) and Jim (Griffin from Roanmore Park) and sibling to Niamh, James, Frank and Eimear, Gráinne is originally from Grange Heights, via Dunmore East as she explained.

“For over 40 years, we had a caravan in Dunmore East. We used to be down in Queally’s, at the back of the Strand. And when I was born, I went straight from Airmount to Dunmore East because I’m a June baby so I’m an absolute water baby! We spent every summer in Dunmore East and the only few years when we didn’t was when my Dad had a serious accident in July 1988 when he was involved in a head-on collision – a woman fell asleep at the wheel of her car just outside Thomastown – and he spent I think about a month to six weeks in the Mater (Hospital) in Dublin…and that was a long recovery for us all. So we gave up the caravan for a little while and we had a trailer tent in Dunmore East before we went back to a new mobile home. And my parents still go back out to Dunmore every summer: they go for the weekends in May – Whit Weekend, the whole lot – and then they come back in for the All-Ireland (Final) every year. It’s a great tradition; they’re out there the entire time and now  we all hop and skip out there with our kids, Blathnaid and Oisín (age: eight and a half) and they’re June babies too.”

With a delightful array of their artwork displayed on the opposite wall as we spoke, Gráinne recalled the circumstances of their arrival on Father’s Day 2011.

“They came four weeks early – and I blame (DJ) Ray Colclough for this, I always will – we used to listen to Ray’s show religiously on Beat and we’ve known him for years, he was great friends with my brother growing up. He was playing ‘Superstylin’ by Groove Armada and I was dancing and then my waters broke and I went into labour – it’s a true story. It was a quarter past three; Darren was meant to be going up to a Roanmore match but that never happened. Darren doesn’t drive, I do, Mam and Dad were in Dummore East because it was June so my cousin Francis who was living in Ferrybank (with partner Claire); I’d given him the car only the week before and I’d told him he was on standby. So I rang ‘Fra’ and got no answer, then I rang Claire who told me he’d gone for a walk over to town since it was such a nice day. So she threw herself into the car and caught him by the bridge, came out to us, brought us straight to Ardkeen and the twins were born at five to six and that was it. And sure every time I hear that song since, it brings it all back – and the kids love it too! Ray was still in that slot on Beat for a few years after they were born and he used to play it for their birthday.”

The Griffins moved from Grange Heights (“we had great neighbours up there – the Kings, the Doyles and the O’Sullivans”) to a four-storey house in Lombard Street before moving to a house on the Cork Road where Gráinne’s parents still live.

“Sure we’re only a walk away from them here (the Clarke Road home they bought in 2005), which is lovely,” said Gráinne, who went to St John of God Primary School, followed by a secondary education from the Nuns in Ferrybank.

“Academically, I was great up to a certain point and then I discovered boys and going out and all that – and that’s when I met Darren and we’ve been together ever since. I loved school, I got on well with most people; through life I’ve gotten on well with most people. Now I’d be outspoken, my view will be heard and I think that comes from my height as well, well in my case, my lack of height! So Darren and myself actually worked together in the Tower Hotel, which was my first job and in Ferrybank at the time you tended to work in one of two places, the Tower or the Ard Rí and that was it. We all worked at functions – weddings and so on – and I ended up working there for seven years and I loved it. I was 16 when I met Darren (a qualified chef, who was baking bread while I interviewed Gráinne) and it was so cringy when you think of it – a friend said: ‘oh, he likes you, would you go and meet him?’ – and then he stood me up on the first day. He’d been out the night before. He was 18 and out of school and hadn’t really figured out what he was going to do – but he was only 18 – so then we did actually meet and that was kind of it really. He went off to college and I went off to Waterpark and repeated my Leaving Cert – I got a bit of cop on – and went off to college in Carlow the following year and did Business. Darren skirted through his course; he could have done a whole lot better but went on working and we just muddled on for a couple of years. We were both young, we were both working and we burned every single penny that we had. We went out the whole time. We often went down on the bus to Cork on a Saturday night, off to Sir Henry’s for the night but do you know what? I don’t regret a bit of it. Now I’d like to have had a bit more money in my pocket but we had a ball.”

Darren proposed to Gráinne in Paris (“I genuinely had no idea – he proposed on the top of the Arc De Triomphe!”) and the couple were married in Rome in 2006.

“We get on so well – no-one makes me laugh more than Darren does – but there’s a slightly different pace to life these days. I’m chair of the Parents Association at Waterpark National School as well where the kids are, and that’s a role I really enjoy. From one end of the day to the other, the plate is very full.” Darren proposed to Gráinne in Paris (“I genuinely had no idea – he proposed on the top of the Arc De Triomphe!”) and the couple were married in Rome in 2006.

Having worked for a year at the NTL Call Centre, Gráinne got “the good job at the bank (Permanent TSB) and I was there for eight, nine years and I loved it but I left when I had the twins”.

Currently working three days a week at the Poleberry Post Office (having previously worked at the Ardkeen Post Office), Gráinne has also been busy supporting Darren with the ‘Beatha Bakery’ business they got off the ground last July.

“The bakery came about due to a major shift in Darren’s circumstances. He’s always had a grá for bread and when he went back to do a culinary arts degree a couple of years ago, he loved every single minute of it. His thesis was on the rise of sourdough in relation to manufactured bread and he’s now putting that to use now day in, day out. And here we are now, with a bakery built in our back garden!”

With an oven and other baking equipment acquired from a kindly Clareman (“Bob the baker – he started his baking business out of redundancy – talk about the wheel going full circle”), the Collins clan have hit the ground running.

“The Saturday morning market (in John Roberts Square) is fantastic – we’re doing wholesale as well, supplying cafés and restaurants – and the support from the city and Tramore has been immense. We’re lucky we’ve maintained our customers – most of them have reduced their orders which, given the time of year, is to expected – but we’re really happy to have maintained them. Darren is up at 3am on Saturdays; I’d be stirring at 6am and we get ready for the market. We’re growing slowly and organically but it’s going at a good pace and there’s only so much that we can do right now given our scale – it’s a three-day process to make one loaf of bread. We’re learning as we go along and it’s all been very enjoyable. It’s all been a bit of a whirlwind – in the best possible sense. Things have changed dramatically for us as a family but we’re in a very good place.” 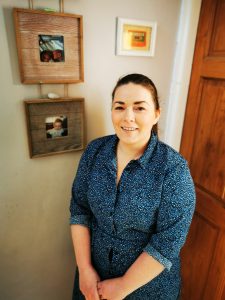 Gráinne Collins, pictured in the hallway of the Clarke Road home she shares with husband Darren and children Blathnaid and Oisín. 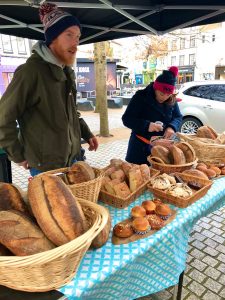 Gráinne, pictured with Darren, selling their Beatha Bakery wares at the John Roberts Square market, where you’ll find them every Saturday morning.