A COMMUNITY playground which will be developed in the grounds of Mount Sion GAA Club has taken several years to realise but the committee which has spearheaded the effort believe it will be worth the wait.

Speaking to the Waterford News & Star, committee member and club stalwart Jim Greene said: “You’re going back four AGMs since we first came up with the concept. We felt a playground would be beneficial to the club and would also help us to integrate more into the wider community. It took nearly four years to get to this point but we’ve had great help from the Council to get this off the ground – they put any insurance issues the GAA might have had with the project to bed for us and that was a massive help. It was long process but please God we’re only a few months away from it becoming a reality.”

The contract to develop the playground was signed by both Waterford City & County Council and the GAA just under a fortnight ago. According to Councillor Eamon Quinlan (FF): “This is a 50/50 split. It’s a €70,000 project and we’ve awarded the contract to the company who did the Fenor Playpark, they’re a Galway-based company. The GAA has raised €35,000 and the Council, with the assistance of some central government funding, is putting in €35,000. It’s going to be a community playpark – this isn’t just going to be for GAA members or anything like that. It will be fenced separately from the rest of the grounds up here and will be open from first thing in the morning and we’ve got great car parking facilities here as well. It’s taken some time to get to this point but we feel it’s a really good fit for the area.”

Cllr Quinlan continued: “The big thing for us is that there’s no playpark in this entire end of the city and even though this part of the city has been traditionally home to a much older population, we’re trying to revitalise the area by making it attractive – the house prices around here are that bit lower. We want families with young children to begin looking at this area again and having a playpark here that’s secure, that will be taken care of, that has disabled toilet facilities on-site, the club house adjacent to it, is going to be a big plus for this part of the city. It’s a phenomenal investment by the Council and this collaboration shows that both the GAA community and Waterford City & County Council can positively exploit assets in terms of land and holdings around the city to give people a better quality of life.”

Cllr Quinlan admitted: “It’s taken us a long time to reach this point – insurance with Croke Park was a matter for quite a long time so Irish Public Bodies (IPB), the Council’s insurance provider, is going to insure the whole development. The entire Mount Sion site here is on a lease from the Council for about a hundred years; we’re amending the lease to transfer this parcel of land back to us. IPB will insure it and then the Council will carry out the yearly maintenance checks but the club will actually run the place on a day to day basis. We hit a few speedbumps but we kept at it – and I think everyone is going to be delighted with the end product.”

Construction of the playground is due to take about six weeks to complete and will hopefully be open to coincide with the schools breaking for the summer holidays.

Jim Greene added: “And sure if we get a few players out of it for the club in the long run, sure we wouldn’t mind that one bit either!” 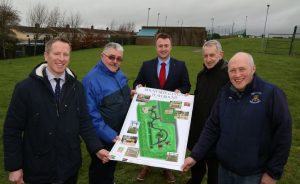 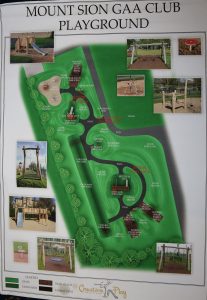 A drawing of the new playground which will be developed on the grounds of Mount Sion GAA Club in the coming months.