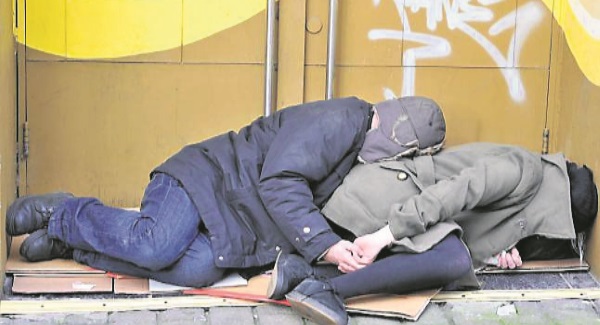 The number of people recorded as homeless in Ireland has surpassed 10,000 again.

The latest figures issued by the Department of Housing showed there were 10,271 people in emergency accommodation in January.

It is a rise of 540 people compared to December when 9,731 people were in emergency accommodation.

Homelessness charities have criticised government inaction in resolving the crisis and said these new figures should provide the impetus to agree a programme for government which can respond to the crisis.

Focus Ireland said 309 single homeless people, most of whom were in Dublin, accounted for the majority of the increase in January.

They have called for all political parties to make a homelessness strategy the core of any new Government programme.

Pat Dennigan, Focus Ireland CEO, said it must be “the number one priority”.

“While I understand delicate talks of this nature can take time, the nearly 4,000 children homeless don’t have time,” he said.

“For every extra day our TDs negotiate a Government formation, three family become homeless every day.

“All parties need to stop playing party politics and start working together to show voters that they are committed to ending this crisis.”

The fall in the number of homeless in December was hailed by Housing Minister Eoghan Murphy as “a move in the right direction” but Mr Dennigan said the increase last month is proof that people should “avoid making snap conclusions based on one month’s figures”.

“The increase in January shows that we have not yet turned a corner and the new Government must show urgency towards tackling this issue,” he added.

The Simon Communities of Ireland said the figures show there is “still a mammoth amount of work to be done” in resolving the crisis.

“The three months of decline of families in emergency accommodation in the Dublin region at the end of 2019 was an encouraging sign that these combined efforts can have an impact.

“However, to help these efforts and allow people to move on from homelessness permanently, the lack of affordable and social housing supply nationally must be addressed as a matter of urgency,” he added.

“We advised people to be aware of false dawns with the figures released on election week and we are now seeing the expected spike again.

“The increases will continue over the coming months as we get further away from Christmas,” he said.

This is a considerably worrying increase, and a complete indictment on Eoghan Murphy. This is a shocking increase a month after he claimed a massive reduction.

“It seriously calls into question the validity of last month’s figures before an election. We need independent oversight on the compilation of these figures going forward.

“The figures are just not to be trusted and any new government need to address this issue immediately.”

The Department of Housing has previously been criticised by the European Commission for its recording of homelessness.

Monthly releases of data “do not cover rough sleeping, hidden homelessness, those in long-term supported accommodation or families in domestic violence refuges,” according to the European Commission.