WATERFORD City & County Council is currently developing a ‘Waterford 2040’ branding concept, which it’s aiming to launch by the end of March.

Addressing the Council’s February Plenary meeting, Economic Director of Services Michael Quinn said the initiative would involve a “big push, with a lot of key stakeholders on board at that stage around promoting Waterford and the opportunities within Waterford”.

While pleased to learn of the new branding, Councillor Thomas Phelan (Lab) queried if the concept would take into account both the city and county.

“I’m just concerned that you’re looking to launch that towards the end of March,” he said. “Maybe it doesn’t allow enough time for consultation with Councillors which might leave us just ticking a box without having much time for input into it.”

Mr Quinn said “a significant amount of work had been done in terms of the background material, projections, how it all fits together from a 2040 point of view; we’re giving some thought to the messaging and the visioning so I think from the point of view of Councillors and the wider stakeholders, we will involve you in that process so that you can see where we’re going with it, you can have an opportunity to influence it but I think the story is going to be very clear: that Waterford is very much a city of opportunity; there is significant scope for investment in the city and for the longer term development of the city and it is a city that is going to grow – and that people and investors should come here…but I don’t think there’s a huge amount of re-working going to be required in terms of where we’re headed with the overall story.”

Regarding the promotion of the county as a whole, Michael Quinn stated: “In relation to the promotion of the county as a whole, the Visit Waterford group are very much working on that in partnership with us. They’re working on a marketing programme which we developed and presented to Councillors last year. The material is actually being developed to support that and that programme is going to be rolled out by Visit Waterford, which is an umbrella group for all of the main tourism operators in the city and county. They’re ideally placed to co-ordinate their own activities with the promotion programme that we’re contributing towards. That’s very much in hand and hopefully it will build year on year in terms of the amount of investment that goes into it both from ourselves and also from the stakeholders within the tourism sector.”

News of the branding concept will have surely been welcomed by Cllr Eddie Mulligan (FF) who had previously called for City Hall to examine what Limerick City & County Council is doing in relation to its ‘Limerick 2030’ branding.

“We’ve got to try and attract investment and we also need to look at the day-to-day operations of the city: we should be operating it effectively like a big shopping centre.”

Cllr Mulligan also called for “the possibility of a collaborative regional power house (being) based in Waterford to try and attract investment, along with other means of raising funding for the development of the city centre”. 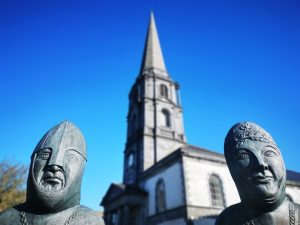 Waterford City & County Council is developing a new branding initiative for Waterford which it aims to launch by the end of March.