A Saturday night to sink or swim 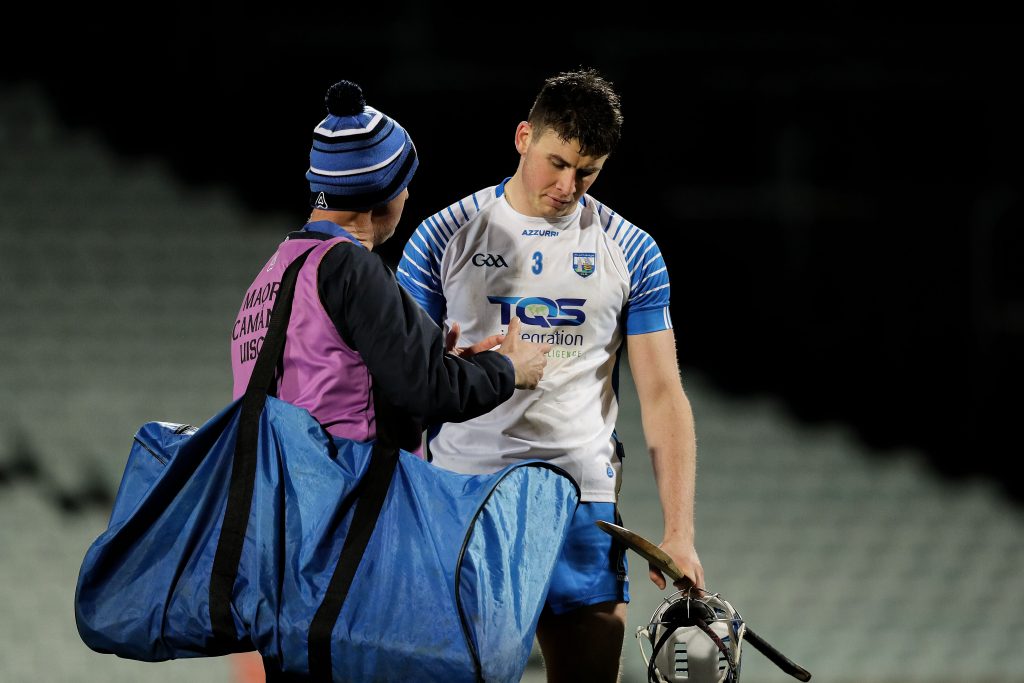 A disappointed Conor Prunty after Saturday night’s loss to Limerick. All roads now lead to Nowlan Park on Sunday to take on Kilkenny. Photo: Inpho.

Waterford got off lightly with a four-point defeat on Saturday night.
The Limerick lead was out to eight twice during the last quarter but the Déise dug in, as they always do under Liam Cahill, with the subs scoring 1-3.
Unlike the previous week however, they never looked like winning this one. Cahill rolled the dice with his team selection and got mixed results.

Last chance saloon
John Kiely picked ten of the 2018 All Ireland winning side including six All Stars. With Waterford already through to the knockout stages, Cahill gave first league starts to Shaun O’Brien, Tom Barron and MJ Sutton while Mark O’Brien got another shot after going off injured against Westmeath. It was sink or swim. A last chance to impress ahead of the summer. Some sank, some swam.
O’Brien and Barron survived at the deep end. O’Brien stopped two certain goals from David Dempsey and Aaron Gillane. He wasn’t afraid to launch attacks off short puckouts either. Barron held his own at wing back. The WIT student won two first half frees and assisted Jack Fagan’s goal with a clever stick pass. He should have got on the scoresheet in the first half when he had time and space.
Two first half substitutions sent out a message from the sideline: management weren’t happy with what they were seeing. As we saw in the Cork game with Conor Gleeson, Cahill doesn’t hang around. MJ Sutton and Mark O’Brien were replaced by Peter Hogan and Jack Fagan before the break. “I think quite a number of my players got a taste tonight of what really is required and I think some of them were found wanting.”
Cahill has looked at 31 players so far including three goalkeepers. Colin Dunford, James Flavin, Ciaran Kirwan and Conor Sheahan have been part of the matchday squads but haven’t seen any pitch time so far.

Tall order
None of the Waterford forwards imposed themselves on the first-half. The ball simply didn’t stick. In open play, Limerick outscored them 1-5 to 0-1.
Waterford lost ball in contact and in the air. The Limerick goal was a perfect example as Dan Morrissey caught a Shaun O’Brien puckout over Neil Montgomery before the ball was worked up the field for Gearoid Hegarty to fire to the net. Barry Nash made another in the second half that led to an Aaron Gillane point. There’s no Seamus Prendergast, Michael Walsh, Tom Devine or Maurice Shanahan to call on in the Déise forward division anymore.
Only Calum Lyons, the Barrons and Jack Fagan consistently broke through the Limerick lines. Fagan has been the find of the league. He put his hand up again on Saturday night. The Meath native can compete in the air, take on defenders and score. He beat four Limerick men before he rifled the ball past Nickie Quaid in the second half. That’s 2-4 in five games now.
A more methodical approach of working the ball through the lines, using the speed and skill at Cahill’s disposal, may be the way to goal. That running game has created opportunities in the last two matches. Patrick Curran had Waterford’s best goal chance off one of those short passing moves. Earlier in the first half, MJ Sutton’s pass was too high for Stephen Bennett and Quaid batted the ball away.
The Waterford front six for May 10 is hard to predict right now. Neil Montgomery is in the mix but needs to add scores (he has only got one point so far) to all the industry that he offers. Peter Hogan has made positive contributions in his last three outings, most notably in a deeper role against Tipperary, scoring 1-4 from play. Patrick Curran, Dessie Hutchinson, Jack Prendergast and Michael Kearney all need to show more to be certain of a jersey numbered one to fifteen.

First choice free taker
Who will be hitting the frees on May 10? Who will be hitting the frees on Sunday?
Pauric Mahony finished the first half with six out of nine. The first two misses were inside his own half but he will be disappointed with the last one closer in which would have made it a three point game at the break. The Waterford captain missed three against Galway and four against Tipperary as well as four from play.
Stephen Bennett took over in the second half on Saturday night, sending over two straightforward chances. He hasn’t been unerring either. Earlier in the campaign, he had six wides and three short into the goalkeeper to go with his eleven points against Cork and squandered a free, a sideline, a 65 and a penalty against Westmeath.
This issue raised its head last summer when Waterford switched from Bennett to Mahony for the Tipperary game. The role of first choice free taker is still up for grabs.