A weekend to remember for West Waterford AC 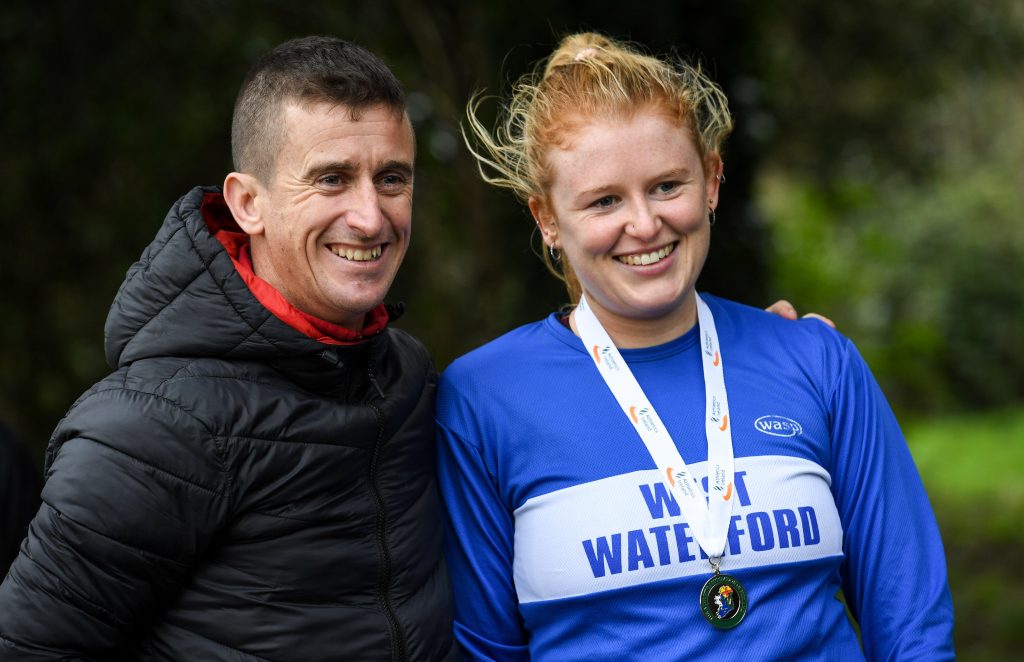 In St Anne’s Park in Raheny last Saturday morning Kate Veale West Waterford AC retained her National Senior 20 km Race Walking title in a time of 1 hr 56.05 seconds, a time which was well outside her best time and on Saturday last also in Santry Demesne in Dublin the All Ireland Secondary Schools Cross Country Championships were staged and in the senior girls race Lucy Holmes Árd Scoil na nDeise Dungarvan put up an outstanding performance to win the individual title to add to the Munster title she won last month.
Always well up with pace on Saturday she was in second place coming into the final half mile but then cut lose to win going away by eight seconds. Una O’Brien Waterpark in the same race ran well to finish 8th. Others to gain high placings were Caoimhe Phelan Abbey CC 10th in the minor race and Ben Kiely Árd Scoil na Mara Tramore 12th in the junior grade.
In the team competitions St Angela’s Ursuline were second the scorers being Tara Ramasamy,Emma Caulfield and Anna Duffin the other members being Anna Duffin, Hannah Burke and Emer McGlynn, while Árd Scoil na Mara Tramore were third in the junior boys the scorers being Ben Kiely Micheal Cuddihy, Ben Brophy and Peter Elickson the other members being Tom Halley, Maurice Quaid, J.P. O’Brien and Danny O’Shea. Another winner at the fixture with a Waterford connection was Saoirse Fitzgerald Lucan Community School who won the minor race. Her father Eoin a former athlete is from Butlerstown as is her aunt Elaine Fitzgerald former International athlete with Waterford AC. 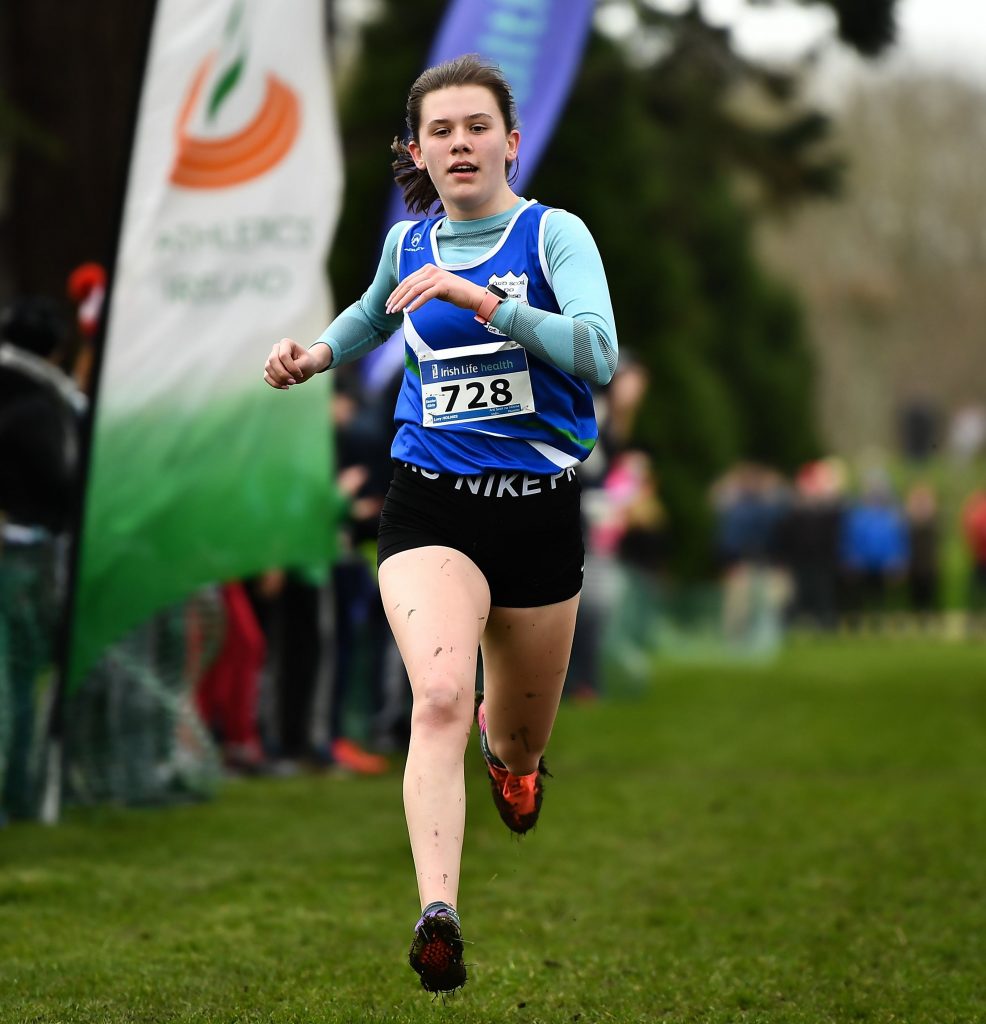 All-Ireland Master’s Indoor titles
The AIT Indoor Arena in Athlone was the venue on Sunday last for the All Ireland Master’s Indoor Championships and many athletes from Waterford competed. Joe Gough West Waterford won the over 65 400 metres in a world best time this year of 60.04 seconds in that age and in the ladies section Terri Gough had four wins in the 60 and 200m, shot putt and weight throw o75. For Waterford Mary Jennings won the o65 800,1500 and 3000m .Tom O’Brien won the over 050 high and long jump. Anna De Courcey the o45 high jump, Paschal Halley was second in the 400 m o50, Nicola Tighe was also second in the o40 hurdles the women’s o35 relay were second also and Aisling Ferguson was third in the 800 m o45 ,for Tramore Shirley Fennelly was second in the long jump o50 and for Ferrybank Pat Kennedy was second in the o60 weight throw. 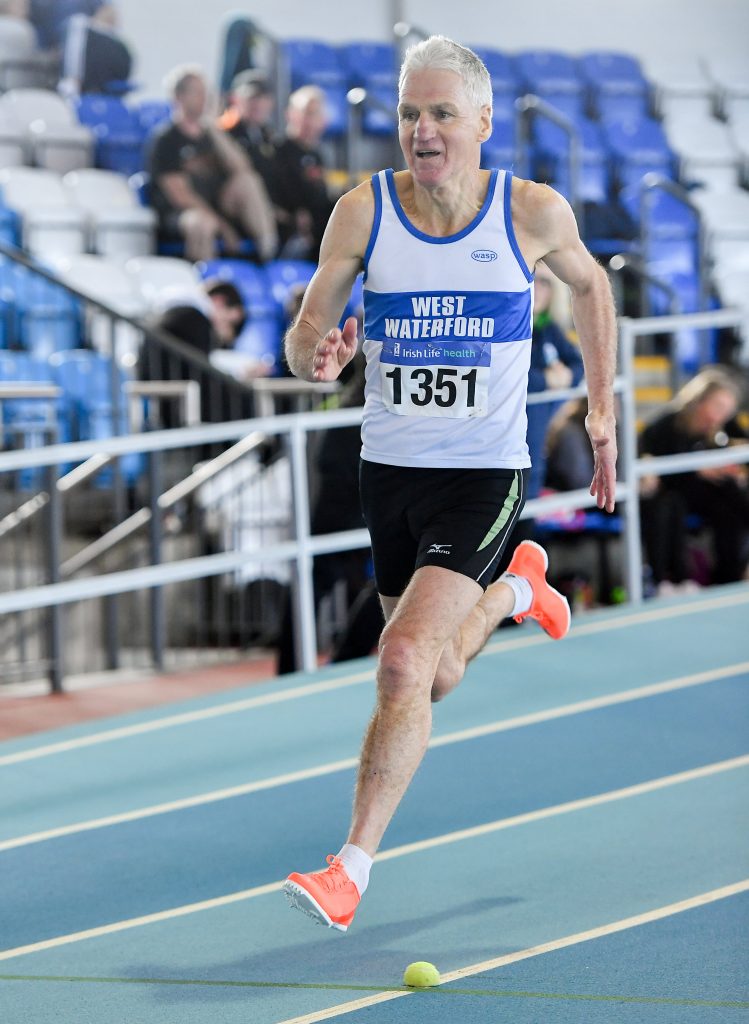 Joe Gough of West Waterford AC on his way to victory at the Irish Life Health National Masters Indoors Athletics Championships at Athlone IT.

European Masters Cancelled
The European Masters Indoor Championships due to be held in Portugal next week have been postponed due to the Corona Virus. 3000 athletes in various ages were due to compete including three or four from Waterford. It has been re fixed for January 2021