Anne O’Rorke: from South Parade to the Turkish border

“During January alone we supported over 4,100 people.”

THE Turkish city of Izmir is an 8,000-kilometre round trip from Anne O’Rorke’s South Parade home in Waterford city. Yet, for the foreseeable future, Anne knows where she needs to be.

Speaking to the Waterford News & Star from the TIAFI Community Centre which she founded to assist women and children displaced by the Syrian war (in addition to vulnerable Turkish families), Anne’s commitment to the cause was instantly palpable.

“I first went out about three and a half to four years ago and I started off in Leros, one of the Greek islands, where I worked with the refugees who were coming in off the boats,” she said.

“From there, I went to Athens and then onto the Macedonian border where there were 14,000 refugees at the time. I came back home (to Waterford) and then headed out to Turkey, a country that I’ve known well for many years and I started work there, mainly with young mothers and children whose husbands are either missing or dead.”

Having worked in a variety of trades, including fashion and floristry, while also running both a bar and a kitchen company over the course of a successful career, Anne opted for a complete change of pace – and scene.

“I wanted to do something so I decided to go on that first trip to Leros and that ultimately led me to Izmir, although I had never intended to stay in the way that I have. While I’d still consider myself as living in Waterford, I’m over here most of the time now. My initial intention was to see if I could help on the islands but from there it just escalated. I set up an NGO (Non-Governmental Organisation) charity called TIAFI, which I’ve been running for the past three years and basically what we do is we look after refugees and some Turkish people too.”

TIAFI is based in a former shoe factory (1,600 square metres over two storeys) in the Aegean coastal city of Izmir, Turkey’s third city, which has a population of over four million people.

“We support a lot of people,” Ann explained. “During January alone, we supported over 4,100 people. We serve food every day; we do about 150 meals a day and we provide support for children with disabilities; we have a lot of children who’ve had legs blown off due to bombs and then we have children with scoliosis, Cystic Fibrosis and other conditions for which there’s little or any support because there’s no free physiotherapy here – the kids suffer an awful lot – so we do a sports and exercise programme with 69 children every week and we also have a waiting list of 50 for that. We’ve a sewing workshop too, a small crèche for the children and a school where the children learn Turkish – we also have a school at the camps in Turbali (a suburb of Izmir) where there are 1,400 people. We do a lot.”

While Izmir is just over 1,000 kilometres from the Syrian border, Anne and her colleagues are acutely aware of how dire the situation remains there, despite an uneasy ceasefire brokered by Turkey and Russia on Friday last.

“There are nearly a million people on the Turkish border,” she told me prior to the ceasefire which has – for now – ceased exchanges between Turkish and Syrian forces in the Syrian province of Idlib.

“They’re caught – they can’t go backwards and they can’t go forward – and 60 per cent of them are children. Towards the end of February, in the space of a week, 12 children died from the cold because some are in very poor tents while others don’t even have that basic level of shelter. The stories from there are awful: I saw one photograph of a man who can’t get into Turkey and he’s holding up a sign that said he would give a kidney for a tent. The stories are as fascinating and amazing as they are shocking and you just wouldn’t be able to comprehend what that is like, sitting at home in Waterford.”

With that struggle in mind, Anne and her team of volunteers decided to do something. “We had to try and help the people stuck on the border. So many of them have been bombed to bits and there doesn’t appear to be any end in sight when it comes to their level of suffering.”

“We did a blanket appeal where we collected blankets and other donations from the (Izmir) area, which we started around February 20 and we got a massive response to it – not from the Turkish people but from the Syrian refugees who are here in Izmir – there are 260,000 refugees here.”

Anne continued: “One woman, and she was quite elderly, came into me and had plastic flip-flops on her feet – it’s quite cold here at the moment – and she had a blanket. I said to her was she sure about donating it. She told me: ‘I took the blanket off my bed but I am so happy to be able to give it. We worry about all of those (Syrian) people at the border and up to now I couldn’t do anything for them. But now with this appeal I can do something.’

It was more than just a blanket appeal, if you know what I mean. It gave people dignity as it gave them a chance to give something back and it was a fantastic success.”

The campaign yielded two full truckloads of blankets and other supplies, initially bound for Adama in North Western Syria towards the end of February. However, given the killing of 33 Turkish soldiers following a Syrian air strike in February and the subsequent negotiations between Turkey and Russia, the trucks were prevented from crossing the border. But as we went to press, one of the supply trucks was finally due to reach Syria from the southern Turkish city of Adana, much to Anne’s relief.

“We had to close our building on February 28 following the deaths of the Turkish soldiers,” she continued. “There was just a very strange feeling right across the city. The Turkish people are naturally upset that these young men have been killed and they don’t want the Syrians here. There’s a lot of blame along the lines of ‘we’ve sent our soldiers to save your country but you (Syrians) have run across the border to hide in Izmir and Istanbul.’ There’s a lot of tension rising within Turkey as well; you can feel it on the streets now.”

The scale of the crisis on the Turkish/Syrian border, along with the Turkish/Greek border is difficult to comprehend from the other end of the phoneline connecting Anne and I. “The United Nations has already said on several occasions that this is going to be one of the worst humanitarian disasters in this century unless decisive action is taken swiftly. The refugees aren’t in organised groups; they’re in trucks and they’re on the road. They’re in the grass, they’re even in the trees and you’re talking about a million people. A million people – and that’s why I felt it was important to do something to help the people in that particular area. And if there is not a political solution in the next few weeks, then what is going to happen to all of those people?”

Anne told me: “Turkey, I feel, has done its best. It has 3.7 million refugees here, more than any other single country has taken in. For (Turkish President) Erdogan to take in more refugees would be political suicide. The EU had promised Turkey €7 billion but they’ve given them half of that…it’s just impossible and now there’s another million on the border and nobody’s doing anything about them.”

Married to Tom and with three adult children, Anne’s commitment to TIAFI was absolute throughout our conversation. “We’ve had amazing support from home over the last three years, from Trocadero (a restaurant) in Dublin which supplied us with the kitchen and the late Noel Heffernan of Perennial Freight, who was originally from Griffith Place. He came over here, saw what I was doing and gave me the first year’s rent and sadly he died last September. He was a powerhouse of a man.”

Regarding how long she intends to remain in Turkey, Anne said: “I’m not in a rush home to Waterford, no. It’s a bigger commitment than I’d envisaged initially but we’re doing an awful lot of good work so I’l be here for the foreseeable future. The work here has just taken over my life.” 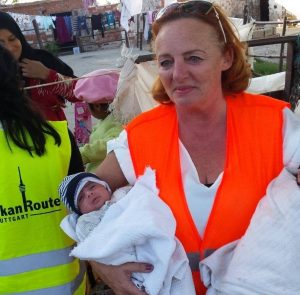 Anne O’Rorke, the Waterford city native and founder of TIAFI, a charity based in the Turkish city of Izmir. 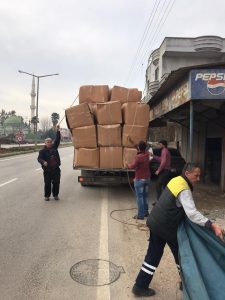 Supplies managed by TIAFI were set to cross the Turkish/Syrian border on Monday evening. 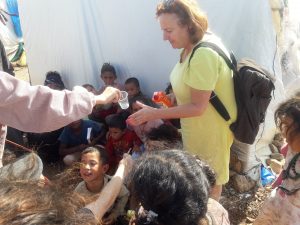 Anne’s work with TIAFI has brought her into contact with young Syrian mothers and their children.