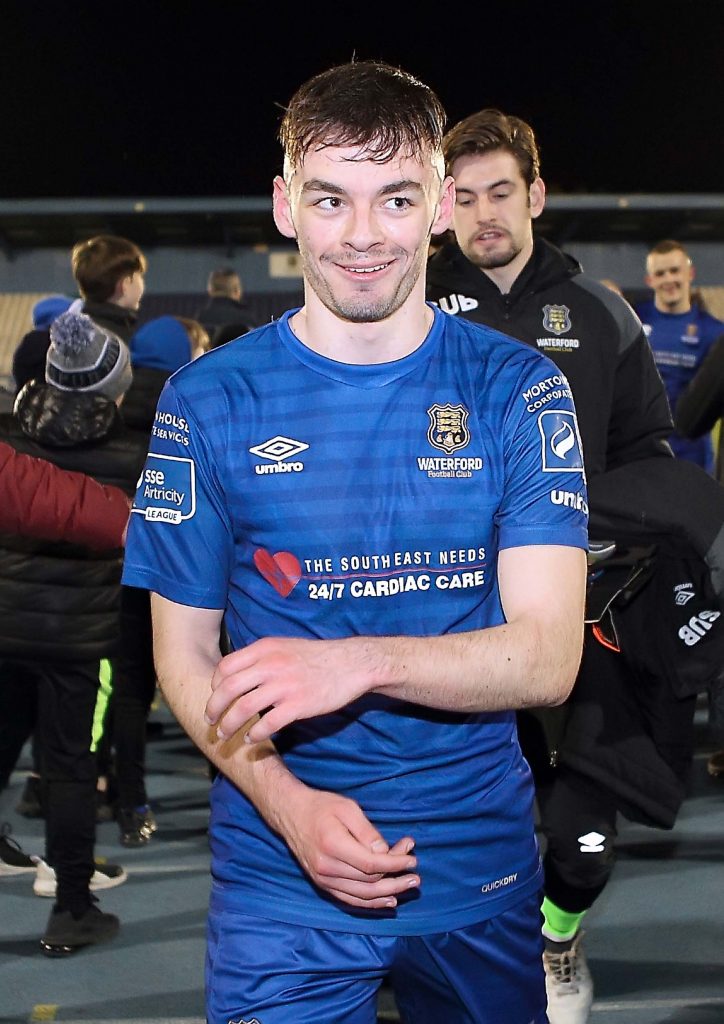 It was a night to remember for Waterford FC midfielder Shane Griffin as his first senior goal in the 94th minute received amazing reaction on social media including nine times Ladies Wimbledon tennis champions Martina Navratilova who was also impressed.
The smile on the face of the local lad was still on his face long after the final whistle from referee Sean Grant as his stunning 30-yard effort flew past Derry City keeper Peter Cherrie to give the Blues a first home win of the season in dramatic fashion.
Griffin was sprung from the bench with 15 minutes to go on the clock and he had a real grin on his face as he left the post-match press briefing when RTE cameraman Brian Walsh showed him the video coverage of his brilliant winner.
Speaking after the game, Griffin said, “I’m delighted with that. It’s my first senior goal for the club and it’s a proud moment, but for me it’s all about the result and the team. I’m delighted to get the goal, but the points mean more.”

SURREAL MOMENT
“It’s a surreal moment and a surreal goal. It was important for us to win tonight especially in front of our own fans after the two defeats earlier in the league here. It’s means a lot to me as a Waterford lad to get the winning goal in front of our fans, but I’m not sure what I was thinking about with the celebration.
“The boys are already tagging me on Twitter about the goal so I’m looking forward to seeing it. It’s an alright strike I suppose so I’m delighted with that. I’m just pleased to do my bit for the team and to get the win. I suppose Sam Bone isn’t happy though after the goal that he got in the first-half, but he’ll get over it.
“I thought that it was a good first touch out of my feet for the goal and I decided just to smash it. I had a feeling when it left my foot that it was destined for the net so thankfully it did and as I said I’m delighted to get my first goal for the club.
After starting against Shamrock Rovers, Griffin wasn’t disappointed to start the game. “When I’m called, I’m called and that’s the way I see it. I’m happy to do my bit for the team when I’m asked to do so it’s important as a team that we stick together. It’s important for me to get minutes, but I’m happy just to play a part.”

HAPPY MEN
“It’s great for the home fans tonight that they are leaving with a win. You could see what it meant to them at the final whistle and they were behind us from the start tonight. I think that having no game last week helped us as well because it gave us more time to get to know each other on the training pitch.
“We’re all delighted with that win. I think that it was important that we got the win at home and to get our first two home goals. To give the fans something to cheer about means a lot and I’m just pleased that we’re all leaving here happy men tonight.”