PEOPLE involved in theatrical productions on anything approaching a regular basis can be dreadfully finicky about any production they attend when donning a punter’s hat.

As I head towards 41, almost 30 years on from my debut stage performance as a Garda in a Portlaw Scór na nÓg novelty act (while also ‘sounding’ like an elephant off stage!), I’m finding it easier to sit in my theatre seat and allow myself to swept along by proceedings. For one thing it’s less mentally taxing and secondly, I’m not a theatre critic and have no desire to be one.

The only stress I ought to experience in a theatre is when I’m trying to think of my next line or lyric, so when I’m an audience member, choosing to be a happier one just feels like an easier option. And guess what? It is.

The energy inside the Dick Meany Auditorium for the eighth and final run of Carrick-on-Suir Musical Society’s production of ‘Oklahoma’ at the Strand Theatre was coursing through each row. And when the main lights dimmed and the spot tracked onto Musical Director Fergal Carroll in the pit, the buzz became a hush. And for the next two and a half hours, the audience was royally entertained.

Why do a show? Firstly, from a social perspective, it’s wonderful. Unlike, say, a field sport where most of the players kitted out are within a similar age range, anything up to 60 years can separate some cast members.

Rehearsals are generally held in wintertime, when there’s little else to do ‘of an evening’ and, from a grown-up’s perspective, you get to tap back into that element of childhood that daily life as a parent, spouse, partner and employee tends to get in the way of: reveling in make-believe.

Now it’s hard work and of course there are some nights when you’d rather binge watch whatever’s popular on your streaming provider of choice.

But, a little like that walk you know the dogs need before you pull the shutters down on another day, you’ll never leave a rehearsal room feeling worse or knowing less than you did before you entered it. Learning dialogue and lyrics comes easier to some than others but at least when there’s a group of you all engaged in the same activity, that sense of kinship and solidarity makes the whole process that bit easier.

From my own perspective, I’ve had the good fortune to be soundly mentored by a whole host of seasoned, enthusiastic stage hands.

Liam Butler once spoke to a cast I was part of about the importance of muscle memory, of tapping into the sum total of all your stage experiences when it comes to making the very most of that next board treading adventure. And how utterly right he is.

Having been a member of almost 30 different casts in various productions since my early to mid-teens, I’ve learned so much from the company and experiences of other performers, making great friendships in the process.

On stage and off, be it cast members, make-up, production, tech, costumes or props, everyone involved in a show has the same goal in mind: to deliver the best possible production to the people out in the auditorium, who’ve parted with their cash in the hope of being entertained.

To see a stage full of happy people on the Strand Theatre stage on Saturday last, taking their final bow at the end of an adrenaline fueled week, filled me with pride. To see so many new faces taking their place in a Carrick show, many of whom will be principal players before too long, filled me with enthusiasm for what lies ahead for them. The sum total of all the talent, both on and off stage, delivered another top class production in Carrick-on-Suir. And it was a pleasure to be part of an appreciative Strand audience. 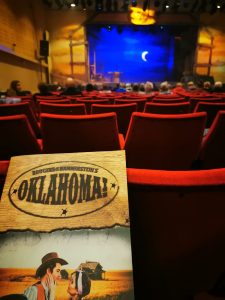 “Family carers of people with dementia should be prioritised for vaccination”