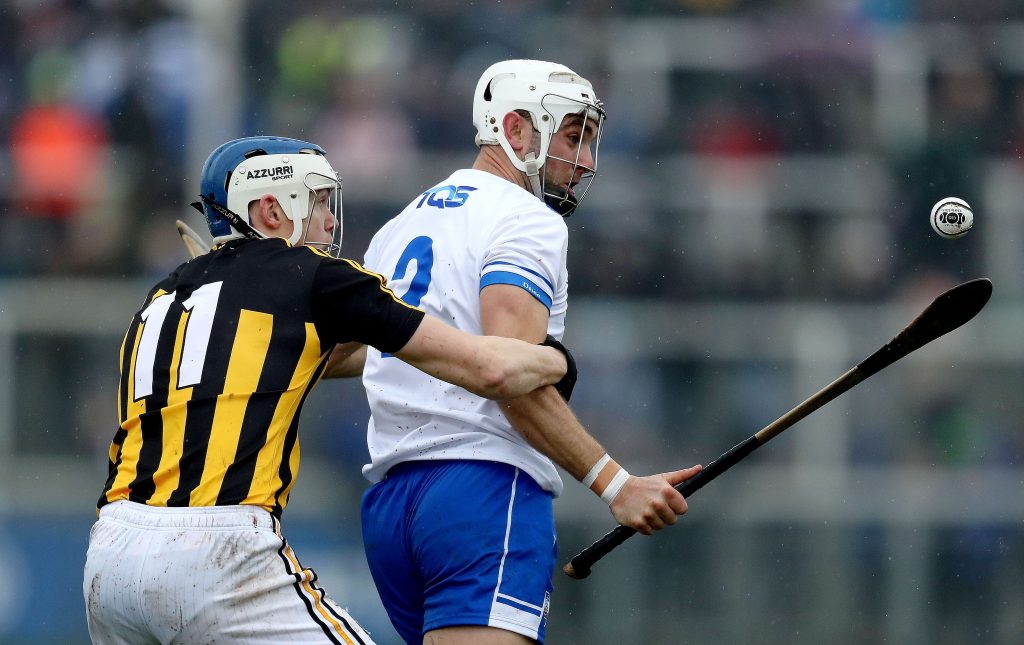 There’s a good chance that Shane Fives and TJ Reid will return to their respective teams for Sunday’s NHL Quarter-final in Nowlan Park. Photo: Inpho.

With defeat at the hands of Limerick very much on the cards last weekend Waterford supporters and, I am sure, manager Liam Cahill would have been banking on Tipperary doing us a favour by getting a result against Galway and so setting up a home quarter final against Wexford on Sunday next. Alas that did not come to pass and the toss of the coin has given Waterford a testing assignment to take on the ‘Cats’ in their den of Nowlan Park.
Up to now it has been a decent league for Waterford with good home wins over Cork and Galway, an expected away win over Westmeath, a strong showing against Tipperary in Thurles despite losing narrowly and a respectable performance with an experimental side against Limerick last weekend. The new management has been getting the feel of things nicely, giving as many players as possible on the extended training panel game time and the opportunity to impress. We are now down to serious business of decision making with the knockout stage of the League upon us and how better to assess just where we are less than eight weeks out from the championship clash with Tipperary than taking on Kilkenny in a knockout game in Nowlan Park.

SIMILAR PATHS
Both Waterford and Kilkenny have taken similar paths through their respective League campaigns. Having had to play without his Ballyhale contingent for most of the campaign Brian Cody has trawled through the clubs, giving game time to as many players as possible and now, having reached the League quarter finals, he will be bent on securing a good run into the championship. Liam Cahill intimated after last Saturday’s game that the learning process is over and so we can expect no holding back in the team selection for Sunday next with what the selectors consider the best side taking the field to secure a place in the semi-finals.
Nowlan Park was always seen as a difficult place for Waterford teams to get results down the years but in recent times that has changed. Our last visit to Nowlan Park to play Kilkenny was in the 2017 league when we came away with a 1-15 to 0-17 win. Other notable wins at the venue in recent years included the League semi-final win over Tipperary in 2015 and last year’s League semi-final win over Galway. The form of both teams in the League this year suggests that there is very little between them and that this clash on Sunday can go either way.

LIKELY LINEUP?
Trying to second guess just what way Waterford will line out on Sunday is not easy. It would seem most likely that Stephen O’Keeffe will line out in goal with Conor Prunty and Shane McNulty in front of him. With Shane Fives having been ruled out for the Tipperary and Limerick games there must be doubts about his availability for Sunday in which case the big decision would have to be made as to who takes his place. Conor Gleeson remains an option but his performance in midfield against Tipperary suggests that he would be better deployed again in that role. Darragh Lyons had filled in at corner back before and done well and if he can curb his inclination for giving away needless frees he could be the best option there.
Kevin Moran must return to the wing back position after missing the Limerick game but with Austin Gleeson ruled out through injury for seems to be the immediate future the centre back position could be a problem unless Darragh Fives, absent since the Westmeath game, has been kept under wraps and is fresh and ready to take his place on Sunday between Calum Lyons and Kevin Moran.
Jamie Barron’s return to form has been a big plus and most would be happy to see him partnered by clubmate Conor Gleeson in midfield. The selectors will have some big decisions to make in naming the front six. Stephen Bennett and Jack Fagan would bee seen as the two players who have nailed down starting places. Both are ball winners with pace and physicality and are proven finishers. Pauric Mahony’s experience is valued and he will most likely be at centre forward while Peter Hogan must also be included for his pace and commitment.
That leaves Neil Montgomery, Mikey Kearney, Jack Prendergast Dessie Hutchinson and Patrick Curran in contention for the remaining places. Should it be found necessary to deploy Conor Gleeson in defence then Kearney could be the player to start in midfield. Neil Montgomery’s physical presence marks him down as a ball winner at wing forward while the choice at corner forward comes down between Dessie Hutchinson and Patrick Curran. Both are players with pace and skill and to get the best out of them they need quick ball coming in wide to enable them to get out and gain possession.

CHAMPIONSHIP PLACES AT STAKE
Whatever way the team lines out players will be aware that their championship places are at stake. Let us hear no more talk of “championships not being won in March”. This is a National League semi-final and we are playing Kilkenny. What better way to go forward than with a win here followed by at least one further competitive game closer to the championship.
If one thing is certain it is that Kilkenny will not be holding anything back on Sunday. Brian Cody will be dealing from a full deck with his Ballyhale contingent on board and do not be surprised to see T. J. back on the bench for this game with perhaps Colin Fennelly. The hard core of experienced players in the Kilkenny line up on Sunday are likely to be Joey Holden, Cillian Buckley, Padraig Walsh, Richie Hogan, Ger Aylward and Walter Walsh alongside rising stars such as Darren Mullen, Alan Murphy, Richie Leahy, John Donnelly and Eoin Cody.
Liam Cahill, his management team and players have done all the hard work prior to and throughout the league to date. The learning process for all is over and Sunday sees what could be described as the first of the ‘championship rounds’, in boxing parlance. All questions will be answered in Nowlan Park.