“Several Councillors will make the case for a City Garda substation.”

ON Monday week last, Garda Commissioner Drew Harris did what the leaders of Fine Gael, Fianna Fáil and Sinn Féin each failed to do during the general election campaign: he visited Waterford city.

The presence of the State’s chief police officer in these parts is hardly common so his being here at all proved as significant as his addressing last week’s Joint Policing Committee (JPC) meeting at City Hall.

Commissioner Harris is in the middle of a cross-country tour as part of his sales pitch for An Garda Síochána’s new operating model, which represents the force’s largest reform since its formation in 1923. Part of that State-wide conversation involves his attending the various JPCs which meet on a quarterly basis in each of our local authorities.

That he visited Waterford within seven months of the reforms being announced represents a better public response time than the City & County Council has received from State bodies such as Transport Infrastructure Ireland (TII) for example.

On that basis, it was pleasing to see that Waterford, at least in this particular instance, had not been left at the end of the queue. That the Commissioner visited just a week after the Supreme Court’s inaugural sitting here also added a sense of relevance and even deference to the ancient status of our city.

A bit more of that from our chief legislators would do nicely once the laggards in Leinster House (Leo Varadkar chief among them) do us all a favour by swallowing some pride and forming a government.

The Commissioner was very much on message while addressing the JPC but there were some optimistic nuggets thrown in for good measure, much to the relief of those advocating for rural Waterford during the meeting.

In response to Sinn Féin Councillor Conor McGuinness, Commissioner Harris referred to Garda Stations which are “in effect either unattended or attended only sparsely or once a week. What I’ve seen in other areas and with the continuing displacement of Gardaí from support or administrative-type functions, is stations being re-opened and individual members or a couple of members being assigned to these more rural stations and that has made a real difference in terms of, one: visibility and, two: reassurance because you can persuade people that they’re still going to see the same service but in reality – and it’s a bit of a truth – once you slow down what a station is and only open it once a week, then they (the public) feel they see less (Garda activity) and that’s probably true…

“I am committed to seeing what we can do with these stations and at least repopulate them with Gardaí so that they’re seen to be proper stations where people are patrolling from and that’s on the basis of my experience of what I’ve seen going around the country and the very positive way in which that’s been received.”

Bearing that in mind, the case for re-animating either the Kilmeaden or Portlaw stations, given their relative proximity to the City Bypass and the M9, will surely be made by Comeragh District members in due course.

Regarding the potential of a city substation, which was raised by Cllr Seamus Ryan (Lab), the Commissioner referred to the “commentary there is about the size of Waterford now and what it’s projected to be out to 2030”.

With the next Garda funding application for new stations due next year, Commissioner Harris said: “I think that’s when we should be looking forward to the plan for 2030 because there are certain cities and towns and areas of cities which are scheduled for pretty considerable growth in population over the next 20 years and we need at least to be keeping in line with that or abreast of it, if not ahead of it.”

With that in mind, expect Cllr Ryan to table questions on the notion of a substation in Kilcohan, Ballytruckle or Ballybeg at Metropolitan District level for at least the next 12 to 18 months. And one suspects other Councillors shall make a case for a substation within their own respective areas, be it Carrickpheirish or Williamstown to name but two.

Commissioner Harris told the JPC: “This year, we’ll have over €1.8 billion to spend and that allows me to grow the organisation in real terms so that’s a very positive place to be and certainly we don’t want to see any diminution of that.”

Whatever money can be thrown Waterford’s way in terms of expanding Ballybricken Station, a potential city substation, re-introducing officers to regular village beats and putting stations such as Portlaw to active use, would be welcome.

However, given our experiences on so many other funding fronts in recent decades, let alone years, it’s understandable if we’ll reserve judgment for the time being. 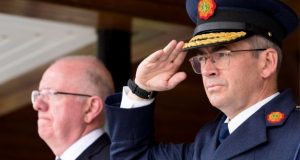