Covid-19 concerns for people with disabilities

CONTACTS from people with disabilities to the Waterford EmployAbility Service “exploded” in the wake of Taoiseach Leo Varadkar’s Washington speech according to one of the service’s Job Coaches.

Speaking to the Waterford News & Star, Jo Cregan, who is also a committee member of the Waterford Disability Network, said one-to-one meetings with clients with Cystic Fibrosis (CF) and Chronic Obstructive Pulmonary Disease (COPD) had been suspended.

“This also applies to people with a range of other infections and low immune systems,” said Ms Cregan, “so we’re now talking to clients over the phone to try and guide them as best we can through this period”.

She continued: “Within a few hours (of the Taoiseach’s speech), we also had a host of employers calling us on Thursday and then into Friday due to the nature of the business that they’re in, particularly in hospitality, telling us that they’ve had to let clients of ours go for the next two weeks, wondering what the procedure was. The Social Welfare office on the Cork Road remains open, which is helpful at this time and they have strict guidelines about letting a certain number of people at a time into the hatches.”

Said Ms Cregan: “Now, given that a lot our clients work in the hospitality sector and in gyms and other centres which have closed, we’ve a procedure in place where they have to get a letter from their employer stating the date they finished work and the date in which it’s hoped they can return to work. They then bring the letter to Social Welfare so that it can be scanned regarding Disability Allowance or whatever payment department that they get their money from. The hope is that the Department of Employment Affairs and Social Protection will then rebate clients the money for the two weeks that they’re going to be out.”

Ms Cregan said such clients “normally have a shortfall of between €55 and €60 a week that they could lose from their payment so by scanning the document to the Department, clients would be reimbursed that money but of course would be without their wage for the next two weeks at least. It’s also a very worrying time taking Waterford Disability Network (WDN) as we’ve had to close our public office (on New Street). Sean and Emily, both of whom look after the office, are now working from home; they’d have very vulnerable people coming into them with a range of different disabilities and the last thing they or anyone on the committee would want now is to put anyone potentially in harm’s way.”

Jo Cregan is also a member of the Darkness Into Light Committee and she expressed her fears for people with mental health difficulties.

“It’s frightening just how quickly this situation has escalated and one of my biggest worries is for people with prolonged mental health difficulties. They’re already isolated. Many of them live at home on their own and if they can’t go to work, the impact of being at home more of the time, particularly for those who don’t have the benefit of having friends and family nearby, is something we need to be conscious of so people will really have to look out for them, give them a call, make sure they’re okay and looking after themselves. The last thing we need is to leave vulnerable people feeling even further excluded from society.”

The Waterford EmployAbility Service, based on O’Connell Street, caters for approximately 150 people with disabilities in Waterford who are either in work or seeking work. 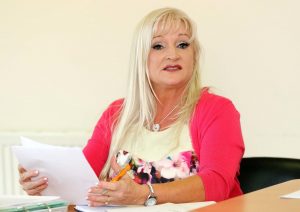