Waterford teacher on the Covid-19 experience in Beijing

“You can’t underestimate  how serious this is.”

A PORTLAW man teaching English in the Chinese capital of Beijing says things ‘are getting better’ as the authorities continue to contain the spread of Covid-19.

Speaking to the Waterford News & Star, Michael Hartley, who lives in one of Beijing’s older neighbourhoods, said that several restrictions remain in place in the wake of the coronavirus’s initial detection in Wuhan on December 31st.

“When you’re going into your neighbourhood, you have to have your identification card at all times and obviously you can’t go anywhere without a face mask and while we’re not as locked in as we were a few weeks ago but it’s still very restrictive at times. We’re still not back in school; we’ve been teaching online for a month now.”

Michael, who has been working in Beijing for the past six months, continued: “Things really started to get bad just after the Chinese New Year (January 25th to February 4th) and the first few weeks of this and the way things went on here was similar to what’s going on at home right now. We kept on getting different dates about when we’d be going back to work but that date kept getting put back so as a result of that we’ve been teaching online since mid-February.”

So how fundamentally different has Michael’s working day become? “Well you’re losing the engagement with the kids so that’s completely taking away from the regular, day-to-day teaching experience and that’s the main difference, to be honest,” he said.

“Secondly, when we were in lockdown, combining your work environment with your living environment was a big challenge for people and it still is; it’s been a huge adjustment. Now I’m lucky that I can still get out and exercise while doing my job as best I can under the circumstances but being in the house, combining your domestic and working life is going to be the biggest challenge facing people at home over the next few weeks. Because when you get over the initial novelty of doing things in a different way, you can’t help facing the fact that you can’t normally go beyond your front door, that your interactions with people start to disappear and physical contact is almost entirely gone. It’s just not the same talking to someone online as it is to actually meeting someone so that’s going to be another big challenge facing everyone at home in the next few weeks. I coped with it okay but I know that quite a few of my fellow teachers have found it very difficult.”

Outdoor movement during the lockdown was essentially limited to buying groceries, Michael told this newspaper.

“All the smaller supermarkets stayed open. Now the convenience stores here tend to stay open late enough but shops – the big shopping malls – were starting to close around six o’clock. You couldn’t enter anywhere without getting your temperature checked and that’s still the case, which was a bit of a shock to the system. And the idea of going anywhere without a mask would just be completely frowned upon. We’ve all had to obey the rules and, as things stand, it has worked.”

Being over 8,000 kilometres from the Hartley homestead on the High Road between Portlaw and Kilmeaden, Michael is naturally concerned about how the Covid-19 crisis will develop back home.

“The whole thing has spun 180 now,” he said. “Obviously my family was very concerned about me a few weeks back and now I’m very worried about them. In fairness, from what I’ve seen, the Irish Government are doing a great job and people do seem to be heeding the warnings but you just can’t underestimate how serious this is, so of course it’s a worry. The sad thing is that people will get (the coronavirus); the lockdowns are only a means of slowing it down – it will spread. When you’re having conversations with your family and they’re asking what the symptoms are and what they should do if they think they’re showing symptoms, it really brings it home. It’s impossible not to worry bur all I can do is stay in touch with my family and keep talking to them. It’s a scary situation.”

Regarding the general mood in Beijing at present (population: 21.5 million), Michael commented: “There’s definitely a lot more life after coming back into the city but precautions, even though they’ve changed over the weeks, are still really strict here – big groups still can’t eat out together and that’s likely to remain the case for the foreseeable future. A lot of places are still closed; gyms, schools and so on and they don’t look like they’re going to re-open any time soon but people are probably a little more willing to go out. But because Beijing went through SARS as well (between 2002 and 2004), there was a real sense of fear about (Covid-19) and they’re still is. They’re incredibly diligent and I don’t see that attitude changing here any time soon.”

He continued: “The lockdown did work but they also have to be careful of a secondary spike if people do rush back to work too quickly. A lot of offices are staggered at the moment with their opening times and it’s worth mentioning that a lot of people who would normally be in Beijing aren’t at the moment since this outbreak happened during the Chinese New Year so a lot of people who would have gone home to their families then haven’t come back. There is a lot more positivity around but people are remaining very diligent when it comes to all of the precautions.”

Michael concluded: “But when I think about everyone at home and my parents of course being that little bit older, your mind naturally drifts back towards Portlaw because there’s no escaping how serious this is. The (Irish) Government seems to be doing a pretty good job and I can’t emphasise this enough: just listen to everything they say, take all the precautions and hopefully a lot of lives will be saved by taking the necessary actions.” 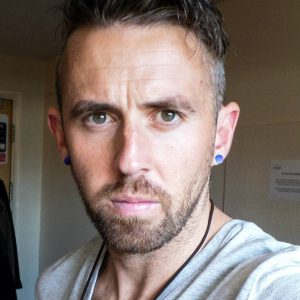 Portlaw native Michael Hartley, who is halfway through a one-year teaching contract in Beijing. 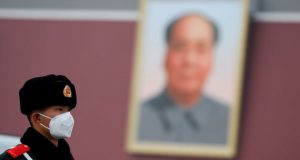 A paramilitary officer, complete with facemask, is pictured standing guard at the Tiananmen Gate in Beijing in late January.                    Photo: The Irish Times 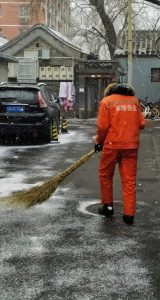