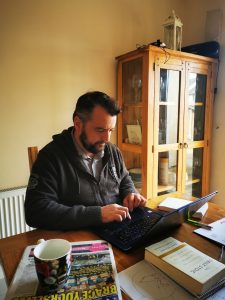 Adapting to working life at my end of the table in Williamstown.

Monday, March 23, 7:30am: After the ‘Morning Ireland’ headlines, a cup of tea and a quick scan of three newspapers (all of which I subscribe to), it’s time to bring Zippy and Buddy out for a walk. The peace down the grassy wing of the Williamstown Road is as surreal as the solitude alongside what is, in regular circumstances, one of the busiest rush hour routes in Waterford. It’s a beautiful morning, offering the dogs and myself a physical respite in the face of the existential crisis facing most of the planet. Actually, dogs everywhere are blissfully unaware of the upheaval facing their human overlords. They’ve probably never had it so good. 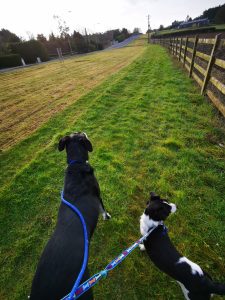 Enjoying the early morning walk with Zippy (left) and Buddy.

10am: I’m into the thick of scripting my ‘Well Said’ interview with Ned Gahan, Head Distiller with the Waterford Distillery on Grattan Quay. Listening back to our chat – not the first one we’ve shared, mind you – I’m once again struck by Ned’s positivity. When we spoke via Facetime the previous Thursday, Ned told me what life has been like in the wake of his wife Ann’s death in 2017. I had no idea Ned had suffered such a loss, leaving him without his wife and his three children without their mother. His stoicism was so profound in the face of such a life-altering episode. He’s a lovely man and fantastic company. I hope Waterford’s new whiskey will be an overwhelming hit for Ned and his boss Mark Reynier, a daring character who took a punt on our city. We need a few more like Ned and Mark among us.

12:45pm: Monday is, traditionally, the most hectic day facing any print journalist in Waterford city. But these rare times have tempered that atmosphere since we’re all in our respective homes, sharing a space with others – be it adult, child or pet – and trying to make the very best of things. Given the circumstances, we’ll have a smaller edition tomorrow and there are a lot less pages left to finalise at this time of the day than what there’d be in normal circumstances. The job has never felt more vocational than it has these past two weeks and we’ll need to retain that spirit for the foreseeable future.

1:15pm: For the first lunchbreak in my 20-plus years in journalism, I venture down to the garden shed, 40-odd feet from my new ‘work station’ and take out the lawnmower. It’s a humble paddock and it doesn’t take long to tidy the place up a bit. I’m glad of both the air and the distraction. I also dig and pick a few weeds and even do a bit of clipping while listening to the ‘Second Captains’ podcast, which is focusing on the likely cancellation of the Tokyo Olympics. The coronavirus is set to halt the greatest show on Earth in its tracks so it looks like it will be at least another year before we’re all gymnastics and synchronised swimming experts again. The tulips we set in the winter look great. I never thought I’d spend so much time admiring them. 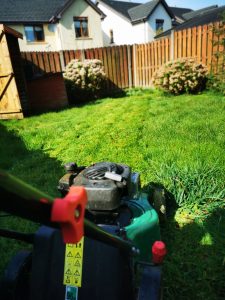 Cutting the grass on my lunchbreak, not my typical activity at this time of the day! 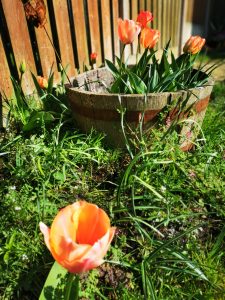 We set some tulips back in the winter. I’d never imagined feeling so grateful for their emergence.

2:45pm: I bring the dogs out for their second walk of the day and stop to take a snap of a Tricolour on a neighbour’s front wall. There’s a large Irish flag billowing from a tree near the Farronshoneen Roundabout too, which an old schoolmate of mine is responsible for. They might have been put out for Saint Patrick’s Day but I’m glad they’re still out. The public response to the pandemic has been, by and large, a patriotic call to action. There’s been ‘hellos’ from fellow walkers and salutes from motorists that most of us probably wouldn’t have considered committing to just a few short weeks ago. When this is all over, I hope we hold onto the friendliness we’re demonstrated currently. Now that’s an outbreak I’d welcomingly embrace. 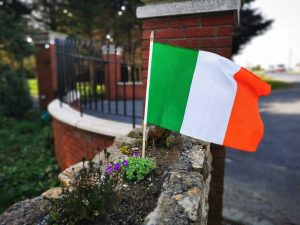 A Tricolour flying on a neighbour’s wall.

5pm: With just a handful of pages to fill in our print edition, I’ve written and posted a piece for our website and am working away on a further report based on a conversation with Doctor Mark Rowe. Like Ned Gahan’s words earlier, I’m struck by Mark’s message about what lies beyond the worst excesses of this pandemic. “We got through the Famine, we got through so much other suffering in this country and we’ll get through this and whenever we come out of this, be it four weeks or four months’ time, we’ll be a stronger community for it, we’ll rebuild and we’ll get back on track again, no doubt about it.” While we can’t lose sight of the appalling consequence of Covid-19, we also need plenty of half-full glasses right now.

7pm: I re-open my laptop to touch base with my fellow Intonations Choir members via the Zoom video meeting app which I’ve also been using for work purposes. We had our first online rehearsal last Wednesday night and it proved a most entertaining respite for us all, generating some positive traction on social media in the interim. The surprising level of pleasant ‘fuss’ generated by our novel get-together prompted RTE’s ‘Nationwide’ to get in touch with our Director Wayne Brown about shooting a piece for this Friday’s programme. We sing a bit but mostly chat during the shoot while a few of us speak about how important these online assemblies are likely to become over the weeks to come. Given what Boris Johnson is expected to tell the British people just over an hour from now, any opportunity for levity needs to be embraced. 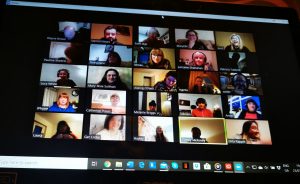 The Intonations Choir, of which I’m a member, meeting on the Zoom app. We’re due to appear on ‘Nationwide’ this Friday!

10:30pm: I head off for a short run (almost three miles) and meet only one person on my route. One last outing for the dogs before their evening feed awaits and it’ll be almost time for bed after that. Knowing me, I’ll probably end up writing something else before I hit the scratcher. 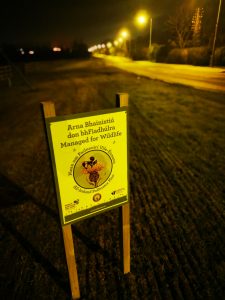 All was quiet in our neck of the wood last night. Very quiet indeed.

Tuesday, March 24, 12:30am:  I do indeed end up writing something before I hit the scratcher. The dogs are fed, the lights go down and sleep beckons while the world keeps turning.