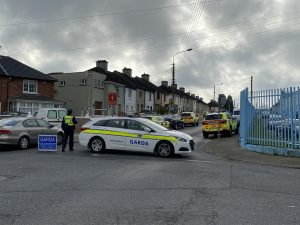 The scene at Griffith Place earlier today where a 20 year old man was detained.

AN incident at Griffith Place, which had been ongoing since 11:30am this morning (March 24) has ended peacefully.

It is understood that a man (20), was refusing to leave a house in the area and had, or claimed to have a weapon in his possession. A number of gardai and armed response units who were at the scene, were stood down at 4:15pm and the man was detained under the Mental Health Act and is currently being assessed by medical personnel.

Gardaí had earlier requested a complete media blackout of the event.