Martin Dwyer on the Covid-19 lockdown in France

“We’ve got to be bloody minded about getting rid of this virus.”

LIKE the rest of Western Europe, daily life in France has been turned on its head by Covid-19. Only last night, Prime Minister Edouard Philippe introduced stricter measures which aim to limit the spread of the coronavirus, a week on from the lockdown announced by President Emmanuel Macron.

As of Sunday last, almost 92,000 fines had been issued across the country for breaches of these emergency measures, with French police stopping almost 1.8 million people in the process.

For Waterford native Martin Dwyer, the proprietor of Le Presbytere, a guesthouse and restaurant in Thézan Lès Béziers, a small town in the Languedoc-Roussillon region of South West France, a previous adjustment in the business schedule may well have made life somewhat easier.

“We’d shut completely up for the winter,” Martin told the Waterford News & Star. “We normally would have stayed open but this year we (Martin and his wife Síle) decided to make life a little easier on ourselves by not opening until after Easter. We actually hadn’t taken any immediate bookings – we’d a few for the beginning of May alright but even if we had any (immediate bookings), we couldn’t have anyway since being officially shut down.”

He continued: “The weather here is gorgeous – it generally is at this time of year – so we’re sitting around on the terrace and enjoying the sun. Now we can’t do an awful lot. We’re not allowed to go to the beach, we’re not allowed to climb the mountains, nothing along that line and so it’s quiet in the house, quiet to the point that you wonder what you’re going to be like in four weeks’ time, wondering if our nerves are going to be able to stand it, but for the moment it’s lovely and it’s very peaceful.”

Outlining some of the restrictions introduced by the French Government, Martin stated: “There’s a list of things that you’re about to do; about four different things. You have to print off a sheet of paper, fill it in and tell (the relevant authorities) about where you’re going and what you’re doing and if you’re stopped by the police, you have to be fulfilling what you’ve written down in advance. So it’s basically a permit. I think what they’re looking to do, and it was happening in Ireland as well, is to stop younger people gathering in big numbers, like during holiday time in the town squares and so on, they wanted them to not do that and to cut down on the amount of mixing they were doing with others.”

Has all of this had the desired effect in Martin’s view? “It appears to have on the basis of what we’ve seen, yes. Hopefully it will keep working with. This situation had required strong measures, we all know that and we’ve all seen the countries that have been feebly batting it; you’re actually required to be quite bloody minded when it comes to getting rid of this virus and to leave it run its course.”

While the mood in the locality remains relatively calm, but Martin stressed the distinction between the the typical French South Westerner and many of those residing in the country’s major urban centres.

“Paris is a different world,” he said. “And gathering from the social media I was reading during the first few says of these news measures, it appeared that more people were out and about more and it seemed to be more dangerous, which might explain why we’ve seen Monsieur Macron on television every few nights at the moment. He’s of the mind that Paris is the area where people are really going to have to cop on if we’re going to get rid of this.”

In addressing the nation, President Macron stated that “We are at war” on six separate occasions, adding: “The enemy is there – invisible, elusive – and it is advancing.” Martin Dwyer felt the tone and the message was just what the country needed to hear in the face of such a crisis.

“I thought it was good stuff; I thought we needed that sort of strength. It wasn’t a moment for shilly-shallying and there’s been a lot of that happening so I think he was strong when he needed to be, just as Mr Varadkar was when he spoke last Monday. I was extremely impressed by what he said.”

The cancellation of a family get-together in France was one of the direct outcomes that Martin and Síle have had to process during these unusual times.

“Our three daughters, their husbands and partners along our two grandchildren were all meant to come out to us or Easter which would have been lovely and it was going to be a great holiday for us all but that’s all gone now and of course we’re going to miss them. Now they had all decided that they weren’t going to come and that was decided before any travel restrictions came in. I’m over 70 now so Síle and I are, strictly speaking, people who are at risk and our family just didn’t want to place us at any greater risk than what we might already be.”

Has being bracketed off in such terms come as a jolt to the senses for Martin? “Oh, totally. Totally! When the talk started about old people being at risk, my immediate feeling was, well I’m just glad that my parents aren’t still around because I’d be worried about and then it suddenly dawned on me that, my goodness, I’ve been 70 since last year – I am now in that category. Yes, it’s certainly a jolt when you consider you are among what’s considered the aged…and let’s face it: it’s a lot easier to be housebound when you have a garden and a terrace to sit around on where we can really enjoy the warm sun. It’s marvellous. Everything is just coming into full bloom here at this stage, we have a vine over our terrace which is just starting to come so yes, it is lovely to be here.”

Martin concluded: “When it comes to myself and Síle, well we’re very lucky that we’re a partnership out here because when you’re locked in the way we are now, it’s a lot easier when you’ve somebody locked in with you.” 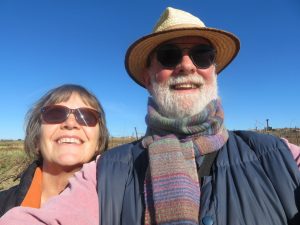 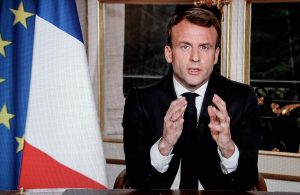 French President Emmanuel Macron, pictured during his televised address to the French nation on March 16.