“The lads have really bought into the management and their style” 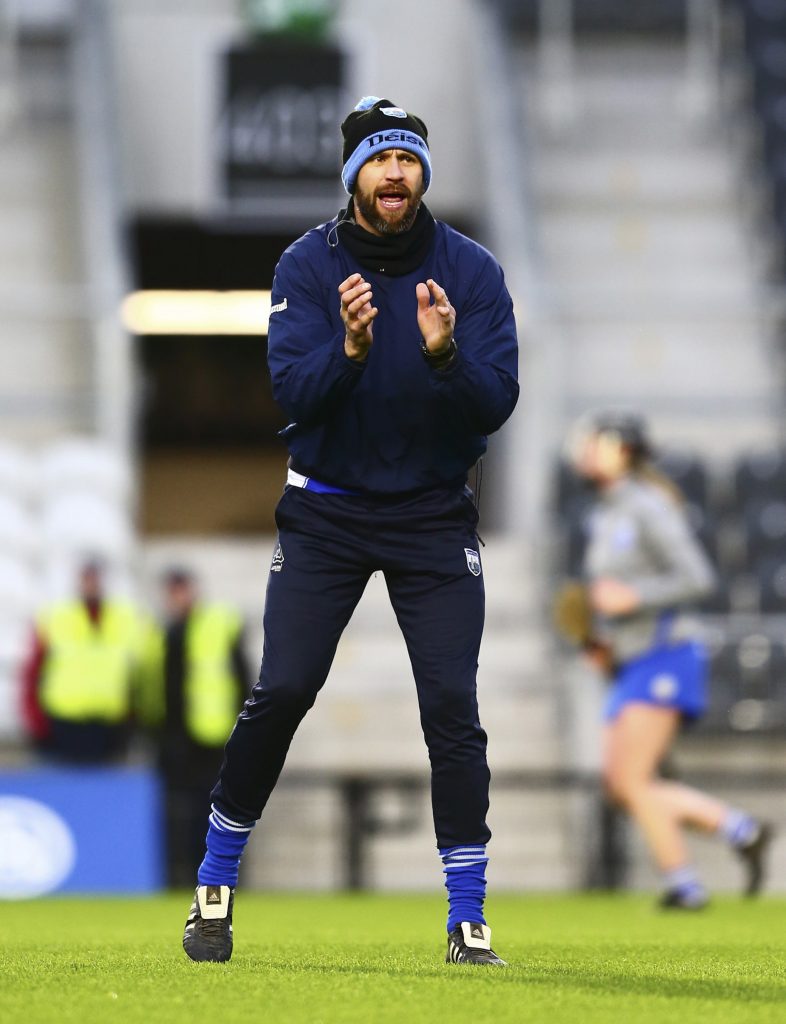 Dan Shanahan before the Waterford camogie team’s recent league meeting with Cork in Pairc Uí Chaoimh. He thinks in light of the current climate that the leagues should be shelved. He also likes what he has seen from the Déise under Liam Cahill and co. Photo: Inpho.

Dan Shanahan likes what he sees from the Waterford hurlers so far both in training and in matches. He thinks that their running game will trouble the top teams.
“When you get fifty lads that are willing to work for the one goal, it’s amazing what you can do. I think the lads have really bought into the management and their style. I was really looking forward to the game against Kilkenny, to be honest with you, to see where they really were. They were going to Nowlan Park and I would have given them a great chance because the big field would have suited them and they would have ran at Kilkenny all day.”
He has been impressed by their work behind the scenes. “They’re doing a lot of drills where they’re running off the shoulder and tackling drills. When you don’t have the ball, you have to want to get it. When you have it, you have to use it to the best of your ability. I think Liam is putting his stamp on it. He has used a lot of players in the league to his credit and a lot of the younger lads have stood up and taken their chance. He’s given chances to other players too. That’s great to see that everybody is getting a chance.”

‘A GREAT YOUNG FELLA’
Liam Cahill has looked at 31 players in five league matches including nine rookies (Shaun O’Brien, Iarlaith Daly, Jack Fagan, Neil Montgomery, Dessie Hutchinson, MJ Sutton, Tom Barron, Shane Ryan and Kieran Power). One of those newbies is Shanahan’s club mate Iarlaith Daly who has started three games in the half back line and scored in all three. “He’s a great young fella. I would have picked him out at underage growing up and his brother Carthach won’t be far behind him. Iarlaith did his Leaving last year and he was under a lot of pressure doing that coming into the club season and probably didn’t perform as well as he would have liked. He was eighteen years of age, doing his Leaving and missed a bit of training. He’s gone back this year and done nothing but train. He’s in his first year in UCC so he’s with a good college as well. He’s a fantastic young lad, big potential. He’s a strong man under a ball and able to read a game. My advice to all these young fellas is to keep working hard. You can’t really say whether he’ll make it or not yet, he’s nineteen.”
Further up the pitch, Neil Montgomery and Jack Fagan have caught his eye. “Monty has been knocking at the door two or three years. We asked him in but he was a bit young. Jack took a year out and came back fresh. He had a very good year with De La Salle last year and he has hit the ground running. He adds an aerial threat for puckouts. It’s a big thing nowadays to try and win your own ball off puckouts. When you’re under a bit of pressure, you can go to Jack. He’s well capable. You see the goal he got the last day, he took on the Limerick defence and buried it. He passed some fine hurlers going in there!”

SHELVE THE LEAGUE
The coronavirus has left the GAA fixture list in limbo. The former hurler of the year believes that the league should be shelved when the games begin again. “I think it’s an idea. It’s very hard, everyone wants to win the league when you get to the knockout stages. I think it’s something that could be put back. It’s hard to predict what’s going to happen if this doesn’t go away in three, four or five weeks. Will we see the championship? I think we will. Everyone will have to sit down and have a good chat and see what’s best for all involved.”

CAMOGIE STATE OF PLAY
The Déise camogie team, with Shanahan as coach, picked up their first league win away to Clare at the third time of asking. “Against Cork, we created a lot of goal chances and didn’t take them. Against Offaly, we were disappointed with the second half. We had a great first half and we didn’t kill them off. They came back to draw and could have won the game in the end. Against Clare, the girls were really tuned in and we had the Gailltír girls back which is a big help. I just got a feeling the day of the game that our girls were really tuned in. They were given no chance against Clare who had beaten Kilkenny the previous week. We just took the pressure off the girls, told them to go out and enjoy it and we showed a bit of a character. We had a great first half and showed a bit of character in the second half when Clare came at us and we held them out in the end.”
He would like to see the players treated better off the field considering the effort he has seen over the past four months. “I couldn’t say one bad word about them. They give you everything they have and they don’t get anything, I’ll be brutally honest with you. They don’t get half the stuff they should get. We trained in snow, came off the field and they didn’t get a cup of tea. They don’t give go out, they get into their cars and go home. They come the next night and do the same thing. It opened my eyes big time. I’ve always known that it wasn’t going to be the same as the men’s. Again, the effort they put in and when they do that for me, for Fergal, for Pauline, for Kenny, for Tommy Byrne doing the hurleys and for everyone involved, it’s a joy to be down there. I’m enjoying it, god only knows when I’ll see them now!”