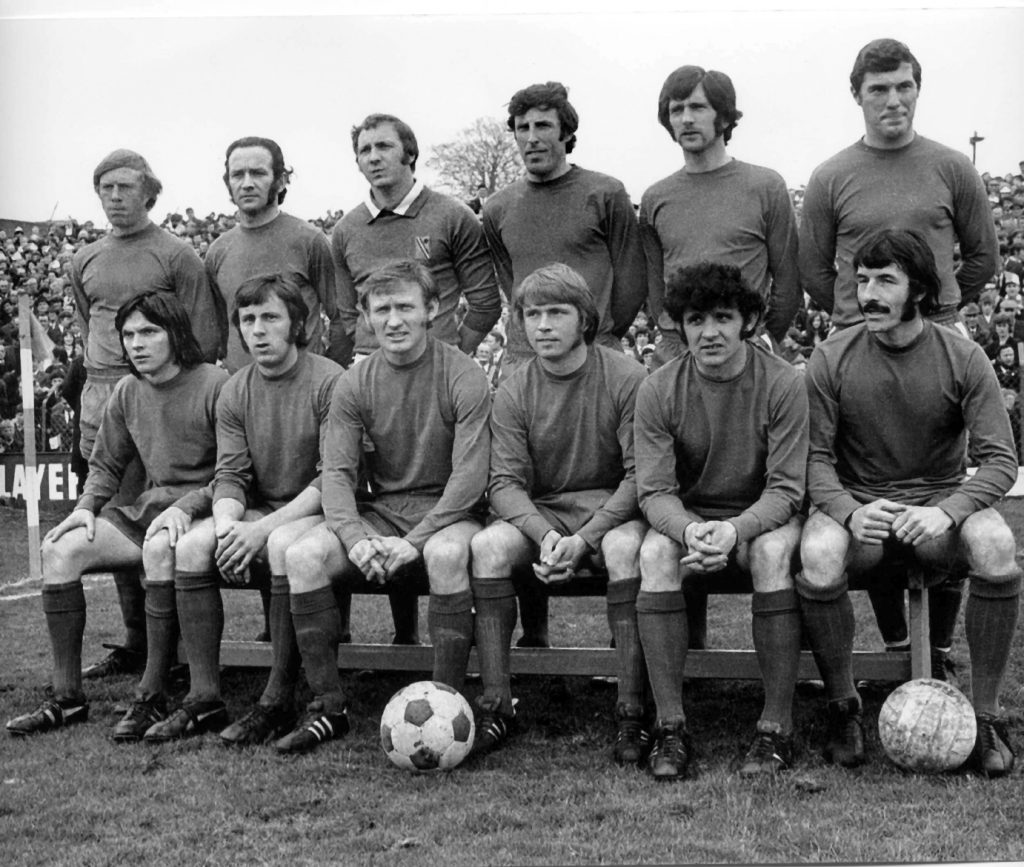 In part one, Paul Elliott takes a look back at when Paddy Coad started a Football Revolution in Waterford and in part two he asks the question can present day manager Alan Reynolds with owner Lee Power lead a second Blues Revolution?

From their first introduction into the League Of Ireland in 1930 as a professional club, Waterford FC have always produced top players and attacking teams. However too many times the Blues lacked consistency and jumped from one era to another without making a real impression on Irish football.
After winning the FAI Cup in 1937 Waterford faded and never made a real impression on the League table through the 30s and 40s.
Things improved in the middle 50s as Eddie McIllvenny came to Kilcohan Park as player/ manager and the former Manchester United man assembled a very strong team. In came the magical Jimmy Gauld a Scottish centre forward and a goal scoring machine, the Fitzgerald brothers were on top form and Con Martin held a very strong defence together.
After losing the 1959 FAI Cup Final to St. Pats after a replay McIllvenny’s team broke up and Waterford entered the 60s on a downward spiral. The 1963/64 season saw the Blues finish second last with only amateur club Bohemians beneath them. The following season Waterford FC finished rock bottom of the one Division League and in June of 1965 Sam Prole, Chairman of the
League of Ireland committee called Waterford Club secretary Michael Bolger to a meeting and told him that ‘unless Waterford FC pulled their socks up the League would look to take action.’ Bolger replied ‘It gave us no pleasure to finish bottom of the League but I can assure the meeting that it will be a different story next season’.

COAD BEGINS BLUE REVOLUTION
Paddy Coad was only seven months in the managers chair and with blue blood running through his veins Coad was hurt by the comments of the League and aided by the cheque book of businessman Frank Davis he set about making his team great. A new ‘Revolution’ was about to begin at Waterford FC as Paddy Coad began to assemble his squad.
The first move was to bring in tough tackling Jimmy McGeough from Derry City, the talented John O’Neill returned from Drumconrda and goal scoring winger Al Casey moved back from Cork Celtic. McGeough recalls his introduction to the Blues, ‘Paddy Coad told me this is a
family club, and it was. Every player seemed to be somebody’s brother or pal. Shamie Coad was Paddy’s brother, you had the Caseys, the Fitzgeralds , all the guy’s were local and they knew each other inside out, I found the spirit amongst the players tremendous.’
Upfront the big striker Mick Lynch began banging in the goals and soon the Blues were engaged in a thrilling battle at the top of the table with Shamrock Rovers. Coad had one more trick up his sleeve as he brought in 19 year old Johnny Matthews from Coventry City, Matthews gave the Blues the extra goals they needed and they clinched the League title with a 1-3 win over Drogheda in Lourdes Stadium on April 17, 1966 to clinch the Blues’ first ever League crown.
In just ten months the fortunes of the club had changed beyond all recognition. Michael Bolger at this stage was in touch with Alfie Hale about returning home to the Blues. Alfie takes up the story, ‘I wanted to come home from England and Michael told me the foundations were now in place for my return. I signed at the same time as Peter Thomas and Peter Bryan’.
Waterford failed to retain their title the following season and Paddy Coad stood down as manager stating ‘To bring the League title home to my native Waterford meant everything to me I can’t top that.’ But what was to follow in 1968 would blow the minds of the supporters and players. As League of Ireland champions in 1967/68 Waterford entered the European Cup, the draw took place in Berne, Switzerland on July 10th . Shamie Coad had this to say. ‘We took no notice of the draw, I think we went training that morning, then we got a call from
Sean Power who was at the draw and he informed us that we had drawn European Cup holders Manchester United. Suddenly reporters and the media came from everywhere to interview us it was a big story, they were all over us taking photographs and looking for quotes. We couldn’t believe it Manchester United bring it on’. United were first out of the hat but Waterford Chairman Don Kennedy persuaded Martin Edwards to play the first leg in Ireland. The venue then came into question and with Kilcohan Park ruled out so the tie was moved to Lansdowne Road in Dublin. United manager Matt Busby took the opportunity to have a look at the Blues at a home game prior to the tie in September 1968. Peter Thomas remembers Busby’s visit. ‘We were a good side, who would score sixty goals a season and probably let in about ten to fifteen. The whole philosophy of our team was that we will score three, so you will have to score four to beat us.

The gate was about 9,000 fans in Kilcohan every second week, most clubs in the English 2nd Division weren’t drawing that. On most
Sundays if you were driving you would have to be in Kilcohan about an hour before kick off to get a parking space. The day Matt Busby came to watch us they left a special parking space for him’. On Wednesday the 18th of September over 48,000 packed into the Dublin venue to watch the biggest game in the Blues history. Peter Thomas continues ‘What the people in the Stadium didn’t know was that, 45 minutes before the kick off we were still in dispute with the club over our bonus. The club wanted to pay us 100 pounds for the two legs, we wanted 100 pounds for each leg. In the end Frank Davis walked into the dressing rooms and said ‘I’ll cover that’ and the matter was sorted. United won the game by three goals to one Denis Law scored all three goals, with Johnny Matthews scoring for the Blues.
In the return leg at Old Trafford United won by seven goals to one with Al Casy scoring the Blues goal. Alfie Hale recalls a conversation with United player Paddy Crerand. ‘Paddy do you think we are a decent League of Ireland side, Crerand replied ‘Waterford aren’t a decent
League of Ireland side, you are a decent bloody team, full stop.’ Shamie Coad again ‘If the two teams played again tomorrow you would end up with the same result. We could only play one way and that was to attack, it was our brand of football and we played that way no matter who the opposition was.’
That brand of football brought the Blues two more League titles with former Man Utd player Shay Brennan in charge and in 1970 once more Waterford hit the jackpot by drawing Glasgow Celtic in the European Cup. Another bumper crowd packed Lansdowne Road as the Blues played the Scottish champions. The success continued as the Blues claimed two more League of Ireland titles in 1971/72 and again in
72/73 but the latter proved to be last of the Blues ‘Revolution.’ Many managers and players came and went from Kilcohan Park over the next four years with little or no success. Until the arrival of Tommy Jackson, the hard gritty Ulster man took no prisoners and he led the Blues to their second FAI Cup win in the club’s history as a Brian Gardiner header secured victory over St. Pats at Dalymount Park in 1980. Jackson fell out with the club’s directors two seasons later and he was moved on.
Next week compares this period of revolution for the Blues with the current situation under Alan Reynolds and Lee Power.