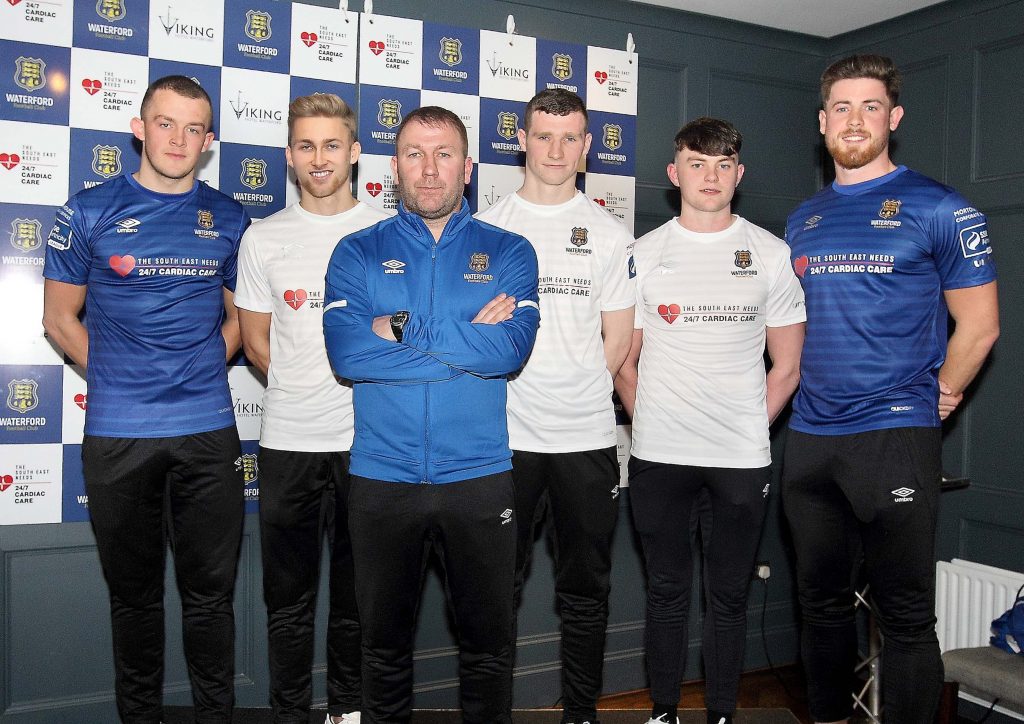 Waterford FC manager, Alan Reynolds, pictured with Blues players Michael O’Connor, Dean Walsh, Sam Bone, Will Longbottom and Jack Larkin at the Viking Hotel, Cork Road for the launch of the new Waterford FC home and away jerseys with the South East Needs 24/7 Cardiac Care logo on them last month. The Blues boss admits that these are difficult times for the club but that health of everyone is the most important thing right now. Photo: Noel Browne.

Health first and a return to football second – that’s the message from Waterford FC manager Alan Reynolds as a degree of uncertainty lingers over the future of the SSE Airtricity League despite a hopefully returning date of June 19.
With the FAI and National League Executive with the support of the 19 clubs discussing a length a possible return amid the coronavirus outbreak, Reynolds has admitted that the League of Ireland clubs face a challenging time when football does resume hopefully in the summer.
The Blues boss is confident however that people will rise to the challenge once the game returns, but is cautious of when that might be, admitting that all his UK based players have moved back across the water since the Pandemic hit Ireland.
Speaking to the Waterford News & Star yesterday (Monday), the Blues manager said, “I’ll give you a rundown on where we stand. Friday week last was the last time we had the lads in because it was the day that we were meant to play Shelbourne, but as we know that game was called off the night before.
“We got them in early because as people know we have players from England and Scotland. I felt it was important at that stage that we allowed them to get home as quickly as possible. We gave them their GPS, which in fairness to the lads in Tramore have sponsored, something that we’re grateful for.
“I think that we needed to allow people to get home to their families because we still don’t know where this is going. We gave them programmes to do and they were working away until we found out the news that the likelihood of a possible return isn’t going to be until June 19.”

CHALLENGING TIMES
“We’re now at a stage where obviously we can’t allow them to continue to do programmes for the next ten weeks and then go into a full long season until December so we’re going to take a break for a couple of weeks and ramp it up a bit a month before we go back.
“We’ve got no date of a return to training or when we’ll bring the lads back, but I would think at this stage that if the season comes back on June 19 that we’ll return a month earlier all going well. There’s a lot of water however to go under the bridge between now and then.
Reynolds admits it’s a big challenge for him and the club especially around the four loan players. “It’s a challenging time for us all not only in sport, but in every walk of life. It’s a strange one for us on the four loan players, Kevin O’Connor, Michael O’Connor, Andre Burley and Akin Odimayo.
“I know that the four players are out of contract in June, but that doesn’t mean that Reading won’t hold onto the two lads Andre and Akin. We’ll have to see our finances here before possible securing both Kevin and Michael on permanent deals.
“It’s a discussion I’ll have to have with the club. It’s a conversation that I’ll have with the lads as well about possibly signing them on permanent deals, but it’s too early to say at this stage. I know that the two Reading lads are enjoying their football here and with everything up in the air, who knows what will happen?
“Reading are really happy with them being here and if their contracts are extended who knows? We’re in a place where we haven’t been before in terms of contracts and so forth. It’s going to be a big challenge for all the clubs, but I think that it’s probably too early now to say exactly what’s going to happen down the line.
“It’s definitely challenging for us at the minute because we’re going to players with programmes and that, but we’ve no idea when we’re going to be back pre-season for the start of the season again plus we don’t know how long the season is going to be.

FINANCIAL HIT
The Tramore native is expecting that a financial hit at the club will happen and is prepared for that. “I think that myself and all the players are realistic people to know that something has got to happen to secure the immediate future of the club.
“It hasn’t happened yet, but I’m expecting it to happen in conversations in the next week or so on doing up a plan on how we keep the club going. We must realise that the players need to live and the staff for that matter, but I’m not up to speed right now with what the government will and won’t do for us.
“I think we’re realistic to know that you can’t keep paying for so many weeks when you have no revenue coming in. It’s conversations that I’m sure will happen with the club sooner rather than later, but like I said we’ve got to be realistic about it.
“We’ve been here before in Waterford and through a lot of dark times, so I’m not surprised that the fans have come out with a campaign to try help the club financially. It’s something that they should be applauded for and we’re grateful for this, but I’m not going to say it surprises me.
“You know yourself that there’s a lot of people that care for this football club and always will. They’ll give the help that they can give, but I think that goes for all fans around the country. Everyone is rowing in behind their clubs and no doubt that our fans will do the same as they always have.
“I think that it’s just all about trying to keep the thing going and that’s the whole thing regardless of whether it’s a football club or any business. It’s a challenging time for the world right now, but I suppose sport plays a part in that world also.

HEALTH TO THE FORE
With June 19 the date for a possible return, Reynolds concluded, “I really don’t know what’s going to happen if we can’t get back playing by then. I suppose we’ll see as it goes on. I think that we must do something whether that just be a two series league if it’s later than July.
“I think that it will go on and it has to go on. I think that it will pose problems of when we start the 2021 season but look that’s all for the future. I think that it would be very hard in the bigger picture if we hit September and things aren’t changing, but look we live in hope that we’ll be back sooner rather than later.
“A positive in all of this is that they’ve pushed the finish date out to the 3rd or 4th of December and have scrapped the final round of games. There’s certainly room to play with there if we don’t get back on June 19, but if it was to be pushed out more, I’m not sure where we go then.
“It’s hard on the clubs that have their budgets done based on a free-flowing season, but it’s even harder than it was now. You look at local business that have been hit and that’s a knock-on with sponsorship. It’s a worrying time no doubt but we need to be positive that we all come out the right side of this.
“This is all about our health at the end of the day and that’s the thing that matters most. There are a lot of people struggling during this time of uncertainty across our city and county. I think that’s the most important thing here and we shouldn’t forget that. We should be all grateful to the people fighting to save us right now.
“Football here takes a back seat in the bigger picture. If we could all get back on the pitch and bring some enjoyment back into the lives of people that’s important too. I think that’s for another day though, but for now and once we all want the same thing – football back on the pitch, but the good health for of us all first.”