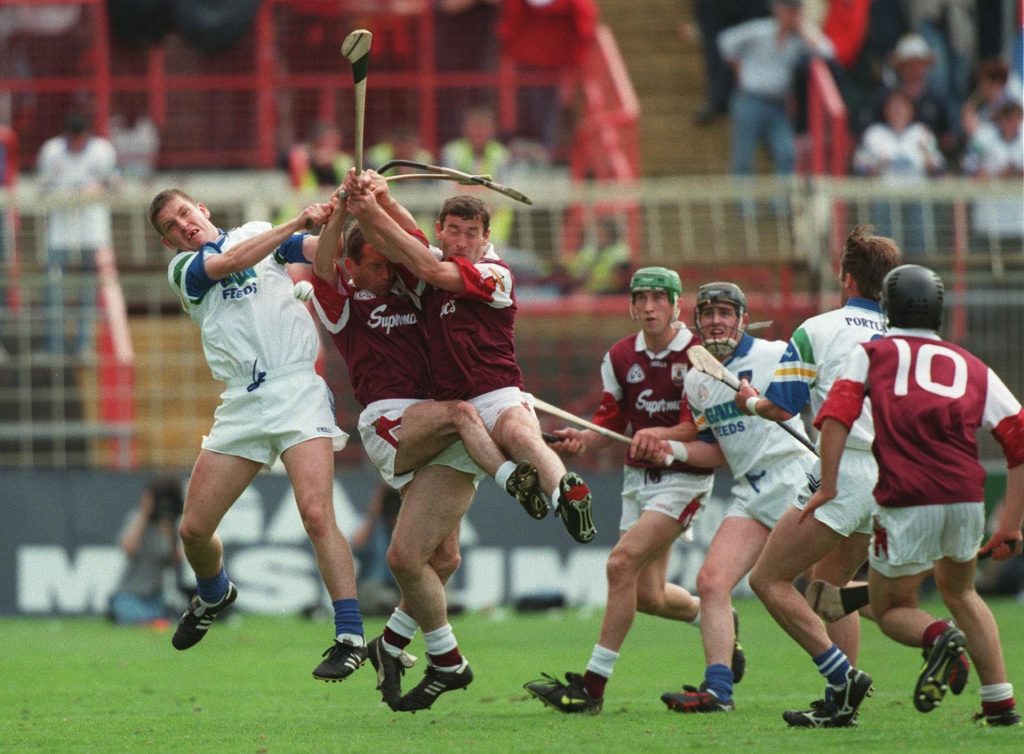 Ken McGrath battling against Galway in the All-Ireland Quarter-finals in Croke Park in 1998, this was Waterford’s first big win in the newly introduced back door championship. Phil reckons that the GAA will have to go back to that system whenever the championships can resume. Photo: Inpho.

As the original deadline of March 29th approaches, it is certain that the embargo on all front line sporting events will be extended throughout the month of April at least.
The longer the present health crisis continues the possibility of changes to the club and county championship formats, in order to complete them in the shorter time frame, grows. On the inter-county front the GAA will be committed to the completion of the Leagues at the earliest opportunity but it is the playing of the football and hurling championships in their present format and within the allotted timeframe that will prove most challenging.
The I. R.F.U. season is drawing to a close and has been shut down until the start of the new season in August while the League of Ireland has only just started and will be playing catch up on resumption, all very straightforward. The GAA situation is more complex in that the Association caters for two of the four major sports in the country, each running in tandem within the same timeframe and, at club level, involving the same players. Likewise, the inter-county players in football and hurling are vital to their clubs and for them the demands will be even greater in a shortened season.
With the shutdown continuing into April, and not even a certainty that it will not continue beyond that, it is difficult to see how the championships can commence in May with teams not having trained from mid-March. Where the football championship is concerned the opening games of the Connaught championship in New York and London will have to be abandoned given travel restrictions in the U.S. and the U.K.
If the final two rounds of league games are not completed then the only option will be to revert to the straightforward provincial championship for this year with no qualifiers but perhaps a back door for beaten provincial finalists, in order to complete the championships.

BACK TO THE FUTURE
In hurling a straight knockout provincial championship for this year with the beaten finalists coming back in through the back door, as Waterford did on previous occasions in 1998 and in the noughties, would free more dates for county boards to complete their championships. The same would apply to the Munster Minor Hurling and Football championships. The Minor Football round robin games fixed for April 8th and 15th next against Limerick and Tipperary are certain to be cancelled but the U-20 hurling in which Waterford will be at home to Tipperary or away to Clare on July 8th may still be unaffected.
In Waterford the weather has already seen to it that the hurling and football league competitions have each seen just one round of fixtures played and as things move on it may be that those secondary competitions will have to be abandoned altogether for this season.
Under the present formats it would take fourteen weeks for the Waterford Senior championships in hurling and football to be completed, running them off in successive weeks with three qualifying rounds, a preliminary knockout round, a round of quarter final games, semi-finals and final in each. Taking into account players involved with county teams, amounting to as many as seven in the case of some clubs between hurling and football such a schedule would be out of the question. In fact it is hard enough on such players as things stand.
In the present uncertainty of the situation it is hard to draw up contingency plans but no doubt there is ongoing monitoring in Croke Park and behind the scenes in the various County Boards as likely scenarios are looked into and responsive options sought.
Meanwhile we can only hope that the worst of the present crisis passes quickly for the sake of those it is afflicting and that the sacrifices being made by all and sundry in every department and particularly by those front line carers will bring the desired results.