Power and Reynolds bring the good times back for the Blues 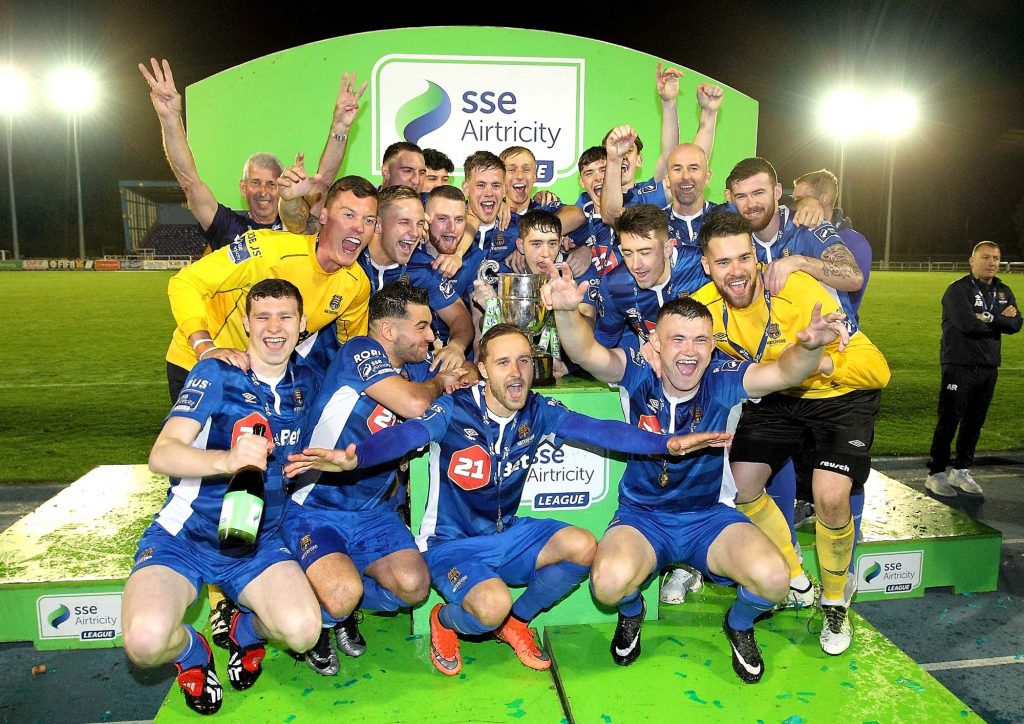 The Waterford FC players celebrate after they won the Airtricity League First Division title at the RSC back in 2017. Photo: Noel Browne.

In part one, Paul Elliott looked back on how Paddy Coad started a Football Revolution and here in part two, he focuses on the most recent Blue revolution in these parts, led by Lee Power and Alan Reynolds.

After the departure of Tommy Jackson in 1982, former player Alfie Hale took over as manager and the club changed their name to Waterford United. A new board of directors was also put in place.
The Blues won the League Cup in the 1984/85 season and reached the 1986 FAI Cup Final. Several more managers came and went over the next six seasons and all of them worked hard to get the Blues back to their former glory days. Apart from a couple of hundred diehard fans the gate receipts in Kilcohan Park were in decline and the future was anything but bright.
At the start of the new decade the Blues were relegated into the newly formed First Division. A yo-yo spell saw the Blues promoted and relegated twice in successive seasons. In 1993 Waterford United took up residence at the RSC Tommy Lynch and Jimmy McGeough made huge strides as both managers won promotion into the top flight. Still the attendances were low as the club struggled to attract the Waterford public inside the gates of the RSC.
In 2007 the Blues were relegated once more and for the next ten seasons one of the glamour clubs of Irish football would play in what became known as the ‘graveyard league, the First Division.

A NEW REVOLUTION
In the summer of 2016 rumours were rampant that a new owner was about to take over Waterford. In came businessman former Irish U-21 international Lee Power and immediately restored the name of Waterford FC. His recruitment of Pat Fenlon as Director of Football and Alan Reynolds as manager was a masterstroke. Reynolds quickly set about assembling his squad. The buzz had returned to the Blues.
All around the city and county, kids were playing football again and proudly wearing their Waterford FC gear, copying the skills of their heroes in blue. Football wasn’t just watching the English Premier League on TV anymore, top class football was in your own backyard and suddenly fans had top players they could go and watch every Friday night.
Names like Bastien, Izzy, Deano, Duffus, Keegan and Browne were emblazoned across the Blues shirts that the fans wore. Waterford FC ran away with the First Division championship and were duly promoted.

BACK IN THE BIG TIME
Waterford’s first season back in the top flight in 2018, after ten years away was the stuff of dreams for the Blues fans. The buzz around the club hasn’t been as good in decades. Alan Reynolds added numerous astute signings to his First Division-winning squad. Some came with exotic names and pedigreed backgrounds. Stanley Aborah was developed by the famed Ajax academy and you could see it every time he took to the pitch. . There was the Belgian Faysel Kasmi who was small but skilful. He was the kind of player some would describe as ‘mercurial’ and others ‘malojan’. He could be awesome one minute and awful the next.
Sander Puri was outstanding, improving as the season went on. He played five times for Estonia that year – the first man to earn full international caps while representing Waterford since Peter Thomas in 1974. What was important though was that along with names like Vigouroux, Héry and Akinade, there was a core of local players that gave their all for the club they grew up watching. We had the imperious Kenny Browne, Dean O’Halloran, Rory Feely, and goalkeeper Matthew Connor. In the summer, Dessie Hutchinson came home and Noel Hunt rejoined the club after sixteen years away.

WONDERFUL NIGHTS
By the time Derry came to town for the opening game of the season, it had been 3,752 days since the Blues played in the Premier Division. On a day of heavy rainfall the fans literally swept water off the pitch with brushes to make it pass the referee’s inspection. It was worth it because when our own Dean O’Halloran scored the winning goal, the reality hit home that the Blues were back. It’s hard to overestimate how important that win was for the manager. Had he started with a defeat, Rennie would have been facing into a trip to the champions Cork with the likelihood of having no points after two games, rooted to the bottom of the table and under immediate pressure.
Instead, the Blues kicked on and by the third game, it was becoming clear that this was a serious team capable of beating anyone. That was a 2-0 win over the hotly-tipped St Patrick’s Athletic when Bastien Héry’s volley nearly took the net off its pegs. It was proof that the Blues weren’t here to take part, they were here to take over. A last gasp winner from Courtney Duffus in Sligo and a home win against Bohs kept Waterford top of the table with twelve points from the opening five games, but it got better with massive home wins over Shamrock Rovers, Cork City and Dundalk.
We waited a long time for nights like these, but were well and truly making up for lost time. When the winning goal went in against Cork, people said they heard the roar all around the City. When Limerick came to town in May, we were hoping for a nice, straightforward win after all the recent drama. After twenty minutes, it was 0-3 and the Blues were down to ten men – a nightmare that ended with a chastening 6-3 defeat.
A bounce back was needed and that came with a 4-0 demolition of Derry City. Of course, we had that incredible heatwave throughout the summer, but one man in particular brightened July and August for all of us. That was the French magician Bastien Héry who made men, women and children fall in love as he shimmied, flicked and nut-megged his way through the glorious summer. His goals were things of beauty, his overall play sublime. “Worth the admission fee alone” was the regular verdict.
In August, the club were given a raw deal with five away games on the bounce, but the crowds still travelled – to Skerries, Derry, Drogheda, Pat’s and UCD. The fans were incredible all year and deservedly won the Supporters Contribution Award at the Airtricity League’s end of season awards. Derry away was the team’s most complete performance of the year. Seasoned Candystripes fans admitted Bastien’s performance was one of the best they’d ever seen from a midfielder in the League of Ireland. The large band of travelling fans celebrated that win in style, it was a result that will be long remembered. There were far more ups than downs over the course of the season, but it was always going to build to one decisive night. That turned out to be against Bohemians in Dalymount in October. The Dubliners were on a long winning streak and Waterford heads could have dropped when the home side took the lead.

EUROPEAN DREAM TURNED INTO A NIGHTMARE
The opposite happened as the Blues showed all their character and ability to overturn the deficit and run out very comfortable 3-1 winners. The experience of Keegan, Aborah, Héry and Puri overpowered Bohs in midfield and Hunty ran himself into the ground up front. It was the night that made European qualification inevitable – a night we had dreamt about for decades. All the talk amongst the fans was about flights and passports. It had been 33 years since Waterford’s last European trip and as the dreams and the excitement grew.
However the Blues were badly let down by the FAI as UEFA ruled that due to a technicality over the clubs change of name Waterford FC would not be allowed to take part in this season’s European competitions. This was a huge blow to the club on and off the field of play. The club suffered a major financial loss and this trickled down to the manager Alan Reynolds who saw his budget cut dramatically.
But Rennie showed all his managerial abilities as he built two teams inside one season in 2019 to stay up.
After months of uncertainty, the good news arrived on Christmas week that Lee Power and Alan Reynolds would be back for the Blues in 2020 and inside eight weeks Rennie assembled a squad that went to St. Pat’s on the opening night of the season and won.
Despite home defeats to Bohs and Rovers, the team bounced back with a win last time out against Derry. This win was extra sweet as the fans were treated to two of the best goals ever seen at the RSC as Sam Bone hit a screamer to equalise and then Shane Griffin popped up a goal that will surely win ‘Goal Of The Season’. At the moment the season is suspended due to the Coronavirus but the dream is still alive and the ‘Revolution’ is ongoing.