When cholera sailed into Passage East 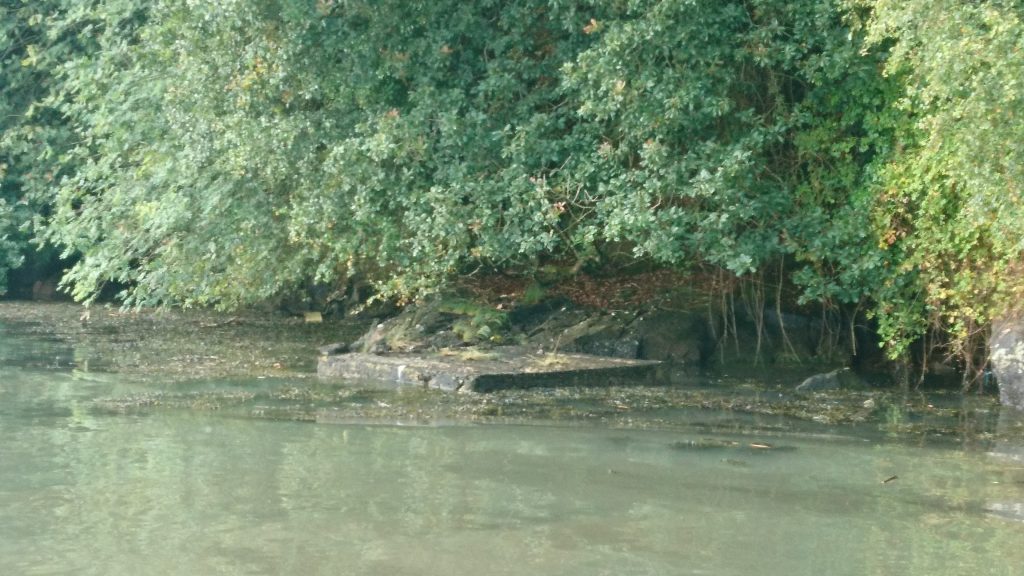 All that remains of the Passage East Quarantine Hospital – a concrete step on the river.

IN JUNE of 1832 a ship, the Lord Wellington, anchored off Passage East, apparently to await favourable sailing weather. However, within hours, her passengers would be fleeing ashore and the army was called out to exert control. For the passengers were escaping a deadly illness that had the country gripped in panic and fear – Cholera.

The Cholera outbreak of 1832 in Ireland was a medical disaster which was compounded by the political and economic situation in the country. The pandemic had been a long time coming, originating in India in 1817 and slowly spreading west; principally by trade, creating a sense of fear and foreboding as it did so. The first officially-recognised case in Great Britain was in Sunderland in October 1831, and was first reported in the country of Ireland at Belfast on March 18, 1832, followed by Dublin a week later.

Thereafter it spread rapidly reaching Cork by April 12, Tralee by April 28, Galway by May 12, Limerick two days later and Waterford on the 20th of May. By August it was established in Wexford and Derry at opposite ends of the country.

‘When the barque Lord Wellington dropped anchor off Passage East on Friday, June 15, and the cry of Cholera went up, there was widespread panic. The barque under Captain Culleton had a disputed number of passengers (some accounts claimed 300)’

The actual cause of Cholera is a bacterium called Vibrio cholera. When humans ingest cholera bacteria (contaminated water, raw vegetables, shellfish etc), they may not become sick themselves, but they still pass the bacteria in their stool. When human faeces contaminate food and water supplies, both can serve as ideal breeding grounds for the cholera bacteria. The standard of living conditions in Ireland at the time meant that it was a fertile breeding ground for the spread of the sickness. The illness causes the body to secrete enormous amounts of water, through diarrhoea and vomiting, dehydrating the body so badly the skin can turn blue.

So when the barque Lord Wellington hove to and dropped anchor off Passage East on Friday, June 15, and the cry of Cholera went up, there was widespread panic. The barque under Captain Culleton had departed New Ross for Howlett & Co earlier that week with a disputed number of passengers (some accounts claimed 300). Later that afternoon several passengers came ashore at Passage East weighed down with their belongings, claiming to be in fear of their lives and refusing to return to the ship. Many of these set off to return to their homes but some were already ill and slumped on the quayside. One man (John Holahan) succumbed on the road out of the village and was found lying in a ditch covered in straw and already turning blue. A local clergyman Rev Paliser was credited with organising their care and a temporary fever hospital was set up in the village.

Dr Gore (an unfortunate surname for a medical man perhaps) of the Dunmore East dispensary took charge of the victims housed in the Passage East hospital. His first patient was described as being sick when leaving the ship, a 42-year-old Wicklow woman, Eliza Murphy. She was not expected to recover. The first confirmed death was of John Holahan who died following a 28 hour illness on Sunday 17th. A relative of his, Mary Maton, died soon after.

By Sunday an emergency meeting was convened in the village by the Waterford Board of Health. It issued a warrant for the interment of the deceased, and forbad all unnecessary communication with the temporary hospital. Alderman Henry Alcock, Mayor of Waterford, and Captain Shapeland Carew Morris ordered a reinforcement of police from Callaghan Bridge, in order to prevent all such communication. It’s not made clear exactly why… was it fear for the safety of the victims, or fear of contagion?

Meanwhile, aboard the Lord Wellington her master, Captain Culleton, was busy trying to care for his charges with the limited means at his disposal. Dr Long from Arthurstown had been aboard on Friday evening to administer some care to a cabin passenger named George Cook of Carlow. However, when he boarded on Saturday morning with Dr Mackesy of the Waterford Board of Health they found Cook laid out dead on the deck along with a steerage passenger named Martin Byrne from Wicklow.

On Sunday the Mayor despatched Joseph Watson, one of his city constables, to Passage, to urge the departure of the vessel. The Lord Wellington was ordered to report to the quarantine grounds off Milford Haven where she would have to remain until all illness had passed. She sailed later that afternoon, but the outgoing pilot when landed by the pilot boat at Dunmore East reported that two more deaths had already occurred while he was on board.

Once the pilot left the Lord Wellington Captain Culleton had a relatively short trip to Milford Haven, one of three “foul bill quarantine stations” designated as anchorages for ships requiring quarantine at this time and where a hospital ship awaited the sick and dying. The procedure was that the ship would fly a yellow jack to signify illness aboard, and anchor away from other ships. A doctor would visit, assess the situation, the sick were removed, or if everyone aboard was sick they would remain. Unless or until the medics decided the ship was free to travel, she would remain at anchor. The Lord Wellington eventually sailed from Milford Haven on June 29 for Quebec.

I can determine nothing further about her passage except to say that 167 passengers were disembarked at Quebec on August 13, undoubtedly she had arrived some days previously and had reported to the Grosse Isle Quarantine Station to be checked and passed as fit to proceed into port. How many had died on the trip across we may never know.

Meanwhile, at Passage East a memorial was forwarded to Government for the formation of a local Board of Health in the village, reflecting its importance to the shipping trade into and out of the ports of both Waterford and New Ross at the time. In September the secretary of the Board, William N Clarke, wrote to Sir William Gosset, [Under Secretary for Ireland], explaining that one of the Board members, John Spencer, had died from cholera and seeking approval for their nomination of John Cavanagh as a replacement. In a follow up letter dated April of 1833 Clarke again wrote to Gosset, requesting permission to use the balance of the cholera fund to provide distress for the poor now suffering from typhus fever.

It’s likely that this Board was responsible for promoting a permanent Quarantine Hospital at Passage and it served a number of uses until it was finally disbanded in the 1950’s. All that remains now is a concrete step on the river.

The Cholera had a deep and profound effect on the locality and it was 1833 before the outbreak had finally ceased in the country. According to the Chief Secretary’s office there were 879 cases of cholera in Waterford in 1832 and 482 deaths. There is much dispute about the official figures however, for example nationally one figure of 46,175 cholera deaths is claimed. However, others claim this as a conservative estimate. And of course following the famine, another cholera epidemic broke out nationally, possibly killing as many people again.

Although we face a different illness now in 2020, we are in a much better place as a nation to face it. We understand and appreciate cleanliness and good hygiene. Have access to up to date information and advice. We are blessed with good systems and medical care practitioners. We understand how the illness is circulating and have been told how to counter it. All of this puts us in a very good place to see this virus off. All we need to do collectively is heed the advice.

This is an edited article first published online at www.tidesandtales.ie