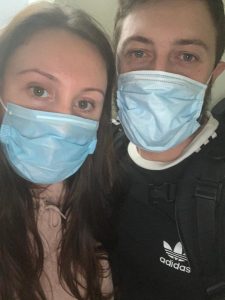 HUNDREDS of passengers have been affected by Etihad’s decision to temporarily suspend services to and from the United Arab Emirates. Tramore natives Paul Nyhan(27) and Emma Curran(25) were turned away from their flight home from Australia via the UAE. They are currently staying in a hotel near the Melbourne Tullamarine airport, with no communication from the airline and no way home to Ireland.

Having lived in Australia since May 2019, Paul and his girlfriend, Emma had originally planned to return home in May when their visa expired. With the growing uncertainty surrounding the threat of COVID-19, they made a snap decision to book flights two weeks ago and fly home to Ireland on March 24.

The flight was booked through Etihad Airways, flying from Melbourne to Abu Dhabi, where a connecting flight would be caught to Dublin.

Speaking from Melbourne with the Waterford News & Star, Paul described the airport as ‘chaotic and upsetting’, with many British and Irish citizens queuing to board the flight.

The previous night, there was no response from the airline with regard to the status of the flight, so Paul and Emma travelled to the airport several hours earlier than expected.

A large queue had already formed and it was four hours before baggage check-in was opened.

At 2.15pm, staff faced the 300 concerned passengers and explained that ‘only UAE citizens were be allowed to board this flight.’

Of the total number of passengers, 15 were permitted to proceed to the UAE. 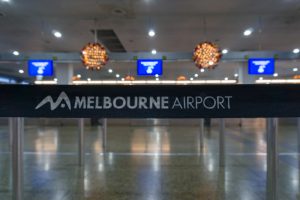 The lack of communication toward passengers has caused considerable stress for Paul and Emma, with a suggestion put forward by Etihad staff to ‘ring in a week or two when it calms down and maybe refunds will be offered by June.’

Alternative flights were available with Qatar Airways, with an economy ticket to Dublin costing 12,000 Australian Dollars, or €6,585. This flight was eventually overbooked by 50 seats, resulting in 50 passengers unable to board that flight.

Any flights which now fly to Dublin, do so through countries which have a travel ban in operation, meaning a quarantine order will be issued on all passengers.

Paul and Emma have criticised the airlines for making a stressful situation even more difficult by allowing the prices to rise so high, saying “these uncertain times are very scary, especially when so far from home.”

The Tramore pair noted the complete absence of any temperature tests, with only half of airport staff wearing gloves. The only social distancing observed was in the McDonald’s franchise in the airport, with widespread queues in all other areas.

At the moment, they are sitting in limbo in a hotel nearby, which they have paid for themselves, without the financial or physical means to return home safely.

The Etihad Airways phonelines continue to be tied up, leaving Paul and Emma, together with countless others, a long way from home, with no certainty as to when they can safely return.

Surge in demand for Meals on Wheels