“I firmly believe that everything happens for a reason.”

NED GAHAN was his typically sunny self when we spoke via Facetime with both of us ensconced in our respective homes given the times we live in.

In these atypical times, the Tinlough, Kilmacow native remained ebullient and good humoured, qualities we’re all be required to exemplify throughout this Covid-19 pandemic.

The Head Distiller at the Waterford Distillery, where an ambitious project to create one of the world’s most distinctive whiskeys is nearing completion, was finalising how the schedule down Grattan Quay way will proceed for the immediate future. But for someone with first hand familiarity with life-altering course corrections, an amended work practice is unlikely to deter Ned too much.

“At the weekends, you’d have the distillers in there on their own so we’ll be down to just the essential staff,” said Ned. “Like a lot of other businesses, we’re being sensible. It’s the right thing to do.”

The Distillery’s open day and inaugural bottling launch on April 25th is among the many events which has been rescheduled due to Covid-19 and it’s hoped the big day will now be held on Saturday, September 5th.

“Ticket sales had been going really well; we’d sales in Australia and America and we even had a ticket sold in Bermuda – now maybe they might have been sending a relation to collect the (commemorative) bottle over here – but the international interest in what we’ve been working on is clearly there. It’ll be a big day for us all and right now anyway, it’s something to look forward to.”

Son of Ned (Tinlough) and Josie (Bigwood, Mullinavat) and sibling to Declan, Paddy, Anita and Breda, Ned moved to Piltown in 2008 with wife Ann (nee Delahunty of Luffany, Mooncoin) where he lives today with children Ned (10), Tom (9) and Mai (7). Life was changed forever for the Gahan family back in 2017, as Ned explained.

“Ann sadly passed away three years ago. She’d been sick with a while, got diagnosed on the 13th of April and died on the first of June. It was fairly quick and that changed things a lot. Sure, given all that’s going on at the moment, the kids are killing each other and having the craic in equal measure. Between home and the distillery, it’s like having two full-time jobs but I’m glad of what I have at work and even happier with the three I have here.”

Our conversation had taken a direction I hadn’t anticipated but Ned speaks freely and calmly about the loss of his wife and immediately puts me at my ease in terms of the topic under discussion. “Work were brilliant when Ann died; there was no pressure at all and I was off for a good bit of time. I initially went back on a part-time basis and (returning to full-time work) was whenever it suited me after that.”

He continued: “I firmly believe that everything happens for a reason so when Diageo closed in 2013 and I was after getting a few pounds, I decided to take a year out of work altogether. Ann was a psychiatric nurse, doing her shifts and the whole lot and Ned was about to start school, he was coming up to (the age of) five so I took the year out; I’d probably never get a chance like it again. I’d have done a lot of the cooking and shopping anyway so when Ann died, I was well able to do all the stuff that the new situation demanded of me. That part of life wasn’t the huge adjustment; the big adjustment was doing all the things that she’d have been good at that I wouldn’t have been good at: like doing hair, deciding on clothes for Communions and big days like that. But in hindsight, having that year off was a big help to me. I hadn’t one day where I didn’t want to get up out of the bed after we lost Ann. I had to get up. The breakfasts had to be made, the school uniform had to be ready and so on. I hadn’t time to dwell on it…and it’s only kind of now that I’m looking at myself. The Solas Centre were brilliant, between art therapy for the kids and they were great for me. We’ve done a walk for Ann for the last few years and we raise a few pound for a few local things but the majority goes to Solas. I’ll never be able to thank them enough for all they did for us.”

Having sat his Leaving Certificate at Saint Paul’s Community College in 1993 (“I don’t really know why we ended up there – but I loved it”), Ned did the part-time Green Cert at Teagasc in Mullinavat and “spent a few years farming, milking cows and so on”.

However, a job opportunity with Guinness at the Cherry’s Brewery site (via a form which his sister-in-law filled in for him) arose in 1999, beginning a lengthy career on the South Quays. After Guinness pulled out of Waterford in 2013, Ned could hardly have foreseen a return to work on Grattan Quay. But then along came the site’s new owner, Mark Reynier of Renegade Rum, whom Ned met in the brewery in December 2014, just days before he was due to start a new job at Bausch + Lomb.

“You don’t get much conversation with Mark from your own point of view – as you know yourself – but I knew pretty much straight away that I wanted to work for him. I didn’t really have a proper interview with him as such and I left thinking I hadn’t a hope of anything coming out of it. Barely an hour later, I was told I was in – and we’d had no conversation about the job or money – but I went in along with Anthony Brazil, Paul McCusker and Eugene Power and we started ripping the place apart to change it from a brewery to a distillery. We learned as we went along; Mark asked me to be Head Distiller, told me he believed in me and we’ve gone on from there.”

Ned told me: “What we’ve done here is going to shake up the whiskey industry worldwide…we’re not a ‘begorrah, begorrah, come here and I’ll tell ya’ story. What we’re doing in terms of the ‘three Ts’ – terroir, traceability and transparency – is like a three-legged stool: take one of the legs away and the stool falls over. We’ve got a great story to tell about what happens to the barley throughout the process, we know each of our supplying farmers individually and we can trace everything we do right back to the field the barley came from. That’s what makes what we do so distinctive and it’s very exciting to be part of something as ambitious as this.”

On more than one level, Ned Gahan and spirit of the utmost integrity clearly go hand in hand. That he’s ended up back on Grattan Quay feels entirely fitting. 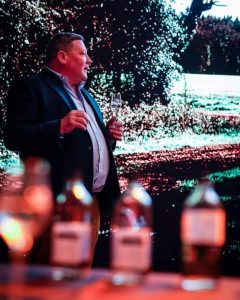 Kilmacow’s Ned Gahan has relished his ‘second coming’ at the Waterford Distillery, a site where he previously worked for Diageo (Guinness). 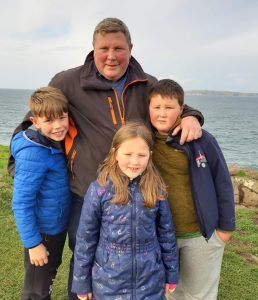 Ned and his children Ned Jnr, Tom and Mai pictured during a family trip to the Giant’s Causeway last summer.