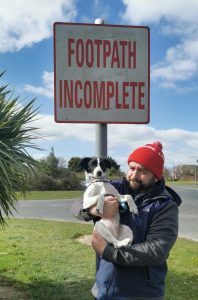 Our bizarrely entertaining little dog and a slightly bizarre sign.

Sunday, March 29, 8:15am: I click on my phone to dip into The Sunday Times and The Sunday Independent. A ‘long read’ piece by Paul Kimmage in the ‘Sindo’ dumbfounds me with the brilliance of its prose and the intellect of his interviewee, the American sportswriter Michael Bamberger. I feel impoverished that I’ve not read any of Bamberger’s work given the depth of character and journalistic savvy he reveals to Kimmage, writing here like a Formula 1 pace setter hellbent on breaking the lap record he’d only broken on the previous lap. I’m grateful that great journalism still has the power to entrance me. It’s the sort of copy I’d love to file when I grow up. Keep ’em coming, Mr Kimmage.

11am: It’s a grey, blustery morning. The dogs are brought out for their first stroll of the day and even by a regular Sunday’s standards, I’m in no rush whatsoever. As I walk towards Farronshoneen, suburbia stands to my right while rural Waterford is literally over the fence to my left, with the Municipal Golf Course a matter of ditches away. I take a left into Williamstown Glen and observe a man skilfully mounting a JCB onto the back of a wide trailer hitched to a tractor.

Building sites have also been shut down due to the latest Government measures so the site, where 49 houses will be built in due course, needs to be secured. There’s no margin for error on the JCB driver’s behalf in conducting this particular manoeuvre while I bring Zippy and Buddy onto the opposite footpath to watch in quiet admiration. He’s probably loaded and unloaded that metallic hulk hundreds of times over the course of his career and now thinks nothing of performing a task. Considering I still struggle with a tractor lawnmower, I doff a metaphorical cap in his direction as he hits the road with his hefty cargo secured. This plasterer’s son will be pleased to see the site buzzing again soon. 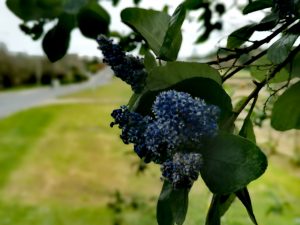 A new bloom in Williamstown.

3pm: Time to get the dogs out for their second walk of the day, as we make our way towards a sign that is unique in Waterfordian terms and, in my mind, iconic as an adopted Williamstownite. ‘Footpath Incomplete’, which now reads like a townland title, informs pedestrians that this particular footpath is, well, incomplete. But this is by no means the engineering equivalent of the 8th Symphony Franz Schubert never got around to signing off. There’s actually nowhere for this path to go beyond its natural ending which begs the question: who considered titling this particular strip of asphalt, thus implying that more expansive days lie ahead for it? These are the matters one has come to consider when living under semi-quarantine. Buddy remains a giddy presence when out and about. Zippy, by contrast, is zen-like.

6:02pm: The Six O’Clock News features shots of Flight EI9019, the first Aer Lingus flight returning to Dublin from Beijing with a cargo of Personal Protective Equipment (PPE) bound for the country’s hospitals. There’ll be up to 10 more flights between now and Wednesday bringing eye shields, gowns and surgical masks back for frontline medical staff to use at a cost of €225 million. I suspect no Aer Lingus flight had been so warmly welcomed back into Ireland since the Boys In Green returned from Italia ’90 and, prior to that, Pope John Paul II’s arrival here in 1979. History of an unwelcome kind is being written on a daily basis. The end of this particular chapter cannot come soon enough.

9:15pm: Too much baking soda – damn! But do you know what, considering I’d never baked anything before in my 40-plus years on this here Earth, I’m still delighted to see something that at least tastes like banana bread emerging from the oven. It may look like a boat that’s run aground when it slips out of its well-greased tin, but as I slice away some of my creation and add some strawberry yogurt, I’m pleased with my lot. I’ll use two baking tins when I whip up the same level of cake mix tomorrow night while using less baking soda. Does this count as upskilling? Maybe that’s a bit of a stretch. 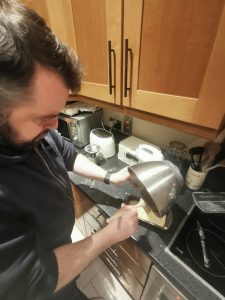 11:35pm: I successfully seek out a 2010 interview with the legendary explorer, Sir Ranulph Fiennes and one particular nugget he shared with me in Lismore that summer feels particularly prescient to the here and now. “When I’m feeling down, like we all do from time to time, I consider myself to have been very lucky. Because you never know what tomorrow might bring, be it cancer or another condition. We all end up dead – everyone of us – nobody ever gets remembered for anything.”

Fiennes continued: “Before my wife (Ginny) died, I went down into the catacombs in Paris with her. There were six million skeletons neatly stacked down there, 11 deep and 11 high on both sides. All of these people had names, wives, business colleagues, relations and so on. And when I get hot around the collar, I think of that place and those nameless skeletons and it reminds me that arguments and negative thoughts and so on are all just a complete waste of time.” How right he is. Why expend unnecessary energy?

Brendan Bowyer: the star who never forgot his City of Music