The Book Nook: Where are we now? 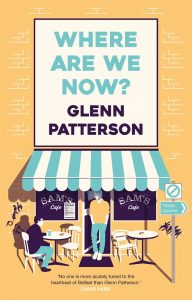 WHEN we marry, we enter the union with a sense of eternal optimism, and ignorant of the heartbreak that had befallen other marriages before us, perhaps believing ourselves immune to such a statistic. When we meet Herbie Murray, he is adrift, his identity still attached to old photographs, the inhabitants of which have long moved on.

His marriage is over, his wife having left him for someone from the South of Ireland. His identity is no longer Herbie – the husband, it is Herbie – the father. Yet, his daughter Beth has moved away from Belfast to London and the news reaches him that she has been declared bankrupt.

Her own stability seems to be in question as she recalls, “I used to take such comfort when I was small – listening to you and Mum… thinking we were this perfect unit. Now look at us, literally all over the place.” Now she returns home, having failed at independent living, financially and emotionally shredded.

Herbie looked at her and memories flooded his mind, drowning in images of blackberry picking and the sunshine on the Shankill Road. His daughter, once small and vulnerable, is now grown-up and bankrupt and this new image of her contrasts so much with the immortalised version of her in his photographs.

His two passports, his two identities, his old memories merged with his new ones – all point toward a fork in the road and man lost in a metaphorical sea. Until one day, with a 50p sourdough loaf, he meets a woman and she opens a world of possibility. Over time, he redefines his sense of identity and Glenn Patterson gives voice to the fear that when our children leave home and our relationships end, we lose grip on who we are.

We are swallowed up and defined by situations, and by other people, so that when those things are taken from us, sometimes we need to stop and take stock. With a strong sense of place, Patterson creates a changing landscape. The backdrop of Belfast glows through the narrative, strengthened by the lyricism of the language. Herbie’s daughter learns to find her way, Herbie establishes a new type of relationship with his ex-wife, and his heart learns how to feel again.

This is a beautiful novel from one of Belfast’s most notable writers and it offers an opportunity for a lesson in healing and optimism for us all.