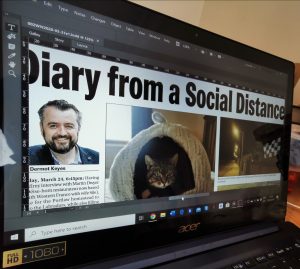 10:15am: Zippy and Buddy’s needs force me into action every morning, and I’m glad of it. Zippy’s low level whining suggests I need to get his lead on pronto and get him out to do the needful. He promptly fulfills his duty on that front. The now visible imprint on the grassy flank of the Williamstown Road suggests many in the neighbourhood have cottoned on to its news status as a physical distancing corridor.

Buddy takes to his pillow soon after our return, while Zippy’s toy lizard is lying in the same direction on the adjoining pillow. It makes for quite the sight while I’m sat in front of my laptop, writing about the potential revision of the entire capitalist model once we’re out the other side of this public health emergency. I break into laughter before contemplating the alteration of social, economic and civic life as we know it.

Buddy taking some time out, while a toy lizard appears to be doing likewise!

11:44am: I’ve already had two pints of water by the time I click on the kettle for my third cup of tea. My kidneys have never had it so good. The tulips offer a welcome splash of colour in the back garden, with wild flowers also emerging in the soil we turned in the early winter. Life, at a somewhat different pace, is still going on. 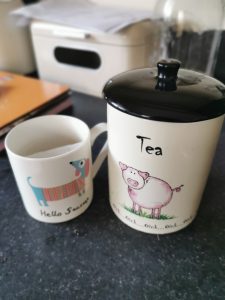 Tea and animals, a common theme in our kitchen/office.

12:53pm: In a radical domestic development, Bumble – the cat with three paws – has finally taken to sleeping in a woolly igloo upstairs. Missy has been a long-term tenant in her own igloo so to finally see Bumble settling into her new surrounds represents the biggest breaking news on the home front since Buddy arrived before Christmas. ‘Sceilig Meow-chíl’, as I’ve taken to calling it, has gained a long overdue resident. 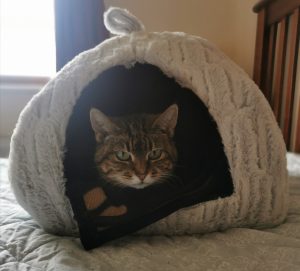 Bumble, out three-pawed kitto, trying out her igloo. She’d ignored it for years!

1:15pm: I take a break from writing on my laptop to handwrite a letter for the third time over the past week. Writing with only one person in mind is a welcome distraction from what the job demands of me. Writing for enjoyment is what drew me into journalism in the first place. And while it’s jarring to think it took the world turning upside down to mark a return to better habits, I’m glad of the manners this emergency has put on me and I’m determined not to resume to some of my more complacent ways once Covid-19 is no longer the dominant influence in our lives.

2:15pm-3:35pm: Our print edition deadline has been brought forward and I’ve two pieces to turn around, which I duly do. Mondays have generally been pressure-filled for me over the past decade so filing copy against the clock has long been par for the course for me. But I’m conscious that my notion of pressure is a far cry from that facing clinicians at University Hospital Waterford less than two kilometres from where I sit.

3:50pm: My only car-based excursion of the day takes me to the post box at Viewmount, directly opposite the car park to the rear of UHW’s Dunmore Wing. Had I known the final collection was 4:45pm, I’d have taken a walk to get here. I have some difficulty in slipping my letter into the box given how lacking it is for space prior to collection time. It appears a lot of people are staying in touch via the written word, a consequence of more time spent at home. What a consoling thought. 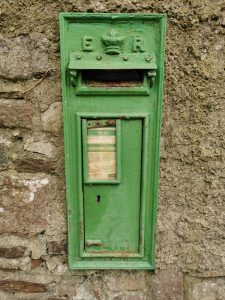 A packed postbox at Viewmount. Note the British Royal insignia.

5.15pm: Another print edition has almost been put to bed. The speed at which we’ve all adapted to working remotely has certainly made this experience a great deal less stressful than any of us could have expected. We’re turning around stories at a fairly efficient rate, and the co-operation we’ve received from sources old and new, in addition to the general public, has been fantastic. We’re all working at times we’re not ordinarily accustomed to, and in so doing have probably made our newspaper more relevant as a consequence. I’m not going to lie: there’s a great sense of reward in such a thought. The call of duty is being well and truly answered.

7:30pm: I post my Sunday diary entry on our website. I’ve not consistently maintained a journal like this since travelling to Cuba for three weeks in 2008. Being so restricted in terms of movement as we currently are might be seen as posing some level of challenge for me when it comes to producing something original. That may well be the case a few weeks from now if we’re all still hunkered down, making the best of this crisis but I’m not there yet. It’s a challenge of sorts but let’s face it, I’m not performing open heart surgery. If I could kick my own arse at the notion of being troubled at the prospect of filing a diary, I’d willingly do so.

11:46pm: I’m on my way back from my latest anti-social run (in which I saw two people, three cars and one ambulance in two and a half miles) when I meet herself and the two hounds out for the final walk of the day. It makes for a pleasant surprise and I assume command (well, attempted command) of Buddy for the mile or so stroll back home. On the way back, a fox skips across the road and into cover. Boars have been spotted in the streets of Bergamo and Barcelona while goats are roaming freely through Llandudno on the Welsh coast. Domestic animals have proven a wonderful distraction during this atypical window in our lives. To see wildlife going about its business sends a smile creasing across my face. 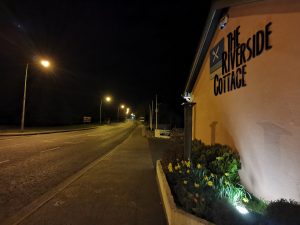 All was quiet on the Dunmore Road last night.

By the time I get home and scribble down a few more thoughts, ‘Late Date’ on Radio One is playing another George Harrison hit, ‘My Sweet Lord’. The greatest Beatle of them all has come back into my life over the past few weeks and I’m as grateful for George’s tunes as I am for the sight of a prancing fox in Williamstown.

A sign in Ballinakill that caught my eye. We can but hope.