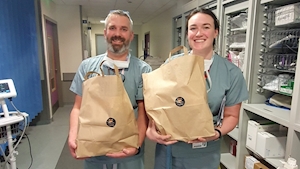 A national fundraising effort which aimed to raise €1,000 to “buy a few meals” for healthcare workers has seen donations of some €550,000 in just two weeks.

More than 18,500 meals have been delivered nationwide by the Feed the Heroes campaign, which has now established a team of 20 volunteers to sustain its efforts.

Founder, Cian O’Flaherty, established the GoFundMe fundraiser a fortnight ago after seeing a local business drop some meals in to healthcare workers in a Dublin hospital.

The businessman from Blackrock in Dublin said he has been “completely blown away by the response” of the general public since.

“They have transformed what began as an ambition to raise €1,000 to buy a few meals into a national operation that, to date, has delivered more than 18,500 meals to critical frontline workers nationwide,” Mr O’Flaherty said.

“More than 11,300 Irish people have contributed to Feed The Heroes, from a seven-year-old donating €5 of their pocket money to a €20,000 donation from Republic of Ireland and Everton football player, Seamus Coleman.

Every single euro makes a difference and we take the responsibility entrusted to us by all our donors very seriously.

Feed The Heroes partners with restaurants, takeaways, caterers and commercial kitchens to prepare and deliver the meals. So far meals have been delivered to staff at the Covid-19 testing centres, HSE contact tracing, the National Ambulance Service and the Fire Brigade, as well as hospital workers.

Mr O’Flaherty said the response has resulted in the operation being significantly scaled up: “We now have 20 volunteers coordinating our efforts along with an advisory board to ensure we are operating to the highest corporate governance principles.”

“Our mission is simple: to get food to Ireland’s critical frontline workers and our intention now is to continue to grow the fund to enable us to support Ireland’s frontline heroes for the duration of the Covid-19 emergency. The meals are greatly appreciated by those who receive them not just for the food itself but also for what it represents; a symbol of our solidarity with and gratitude to those combating Ireland’s biggest ever public health emergency.”

Each meal costs approximately €7 to prepare and deliver.

Individuals wanting to make a donation can contribute on the Feed The Heroes go fund me page through the website feedtheheroes.com

Corporate donations can be made by contacting [email protected]