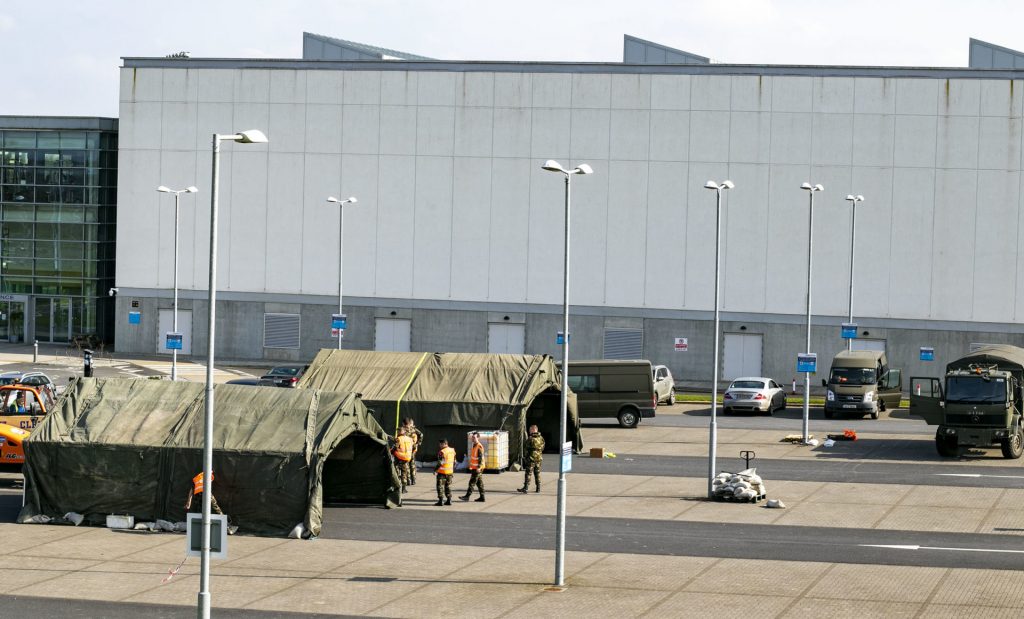 The army at the Covid 19 test centre at WIT Arena.

REGARDLESS of your personal circumstance we’re all experiencing some form of change at the moment. For most of us the biggest change has been time at home. Without any prior knowledge or consent, we have been forced to deal with a most unpleasant form of reality. Actor and writer Stephen Fry spoke on television recently about his own brand of self isolation and what he was getting up to, including slowing down the actual carrying out of everyday, mundane tasks so as to not be overwhelmed by the seemingly endless hours in the day confronting him. That, and reading PG Wodehouse and Agatha Christie, take up a good portion of his day at any rate. Not a huge amount has changed for me personally in relation to my daily routine. I’ve been working from home for some five years now, so I’m well used to the isolation. Indeed my isolation has improved somewhat as my significant other is also home and that means better food! The kitchen has opened up again and the only danger now is that we’ll both roll out from under this a little larger.

Joking aside, we’re all experiencing turmoil of different kinds. We all have to do the sensible stuff and abide by the rules but if you’re well you can stay within the rules and make it a positive time. We have so much stuff at our disposal and sometimes, when it’s all a bit too serious and you can’t handle another gloomy Covid 19 update, it’s good to move away from it and put our focus elsewhere. Naturally I keep up with the latest news, but I limit it to Tony Holohan’s update on the Six O’Clock news. Isn’t he doing a terrific job by the way? As are all our frontline staff who are playing the proverbial.

‘As adults we shouldn’t neglect the things we love and give us deep satisfaction. Now more than ever, music, drama, poetry and artistic endeavours of every kind are vital.’

Those who view this time as being “stuck at home” though need stimulation and a semblance of normality. It’s easy to go feral at a time like this and so we have to keep a healthy balance. Yes the kids need a bit of shape to their day, a little structure but they’ll find things to do. As adults we shouldn’t neglect the things we love and give us deep satisfaction. Now more than ever, music, drama, poetry and artistic endeavours of every kind are vital and without them, the sense of loss of liberties becomes enhanced. I’m a little surprised when I hear people going on about “boredom”. Have you no imagination? Get cracking on a new project, task or mission. Pour yourself in to something you love, even if it is only researching the topic or pursuit, and you won’t know where the hours went.

The world of music at our disposal is colossal and my days have been made very full by that. I used to feel a tad guilty if I spent more than a couple of hours listening to new music, but, I find lately, it’s just the ticket. It’s been great to see so many performers put clips on YouTube and even Neil Diamond got in on the act with his beloved classic ‘Sweet Caroline’ lyrically adapted so as to get the ‘washing hands’ in there. Good on ya Neil, always a legend. Mind you, I laughed at James Blunt’s tweet which read: “During lockdown, while many other artists are doing mini-concerts from their homes, I thought I’d do you all a favour and not.”

The balcony singing in Italy has been incredible and it’s shown people in a horrible circumstance making the very best of what hand they were dealt. Inspirational and a joy to behold, there’s just something so hopeful about those scenes that sends a strong message out that we will not allow ourselves to lose sight of at least some form of simple joy in our lives, knocked off track though we are just now. There will never come a time where humour and song don’t become massively important for mental well being and I say to those posting and uploading themselves singing, joking, laughing, generally just being uplifting, thank you. Keep doing it. Send in the clowns.

We shouldn’t necessarily want to fully escape the drama, but we need to handle it and hopefully overcome it in our own minds, so as not to be unduly burdened by the harshness of it all. When this crisis abates, and it will, we look forward to many of our friends, colleagues and neighbours going back to work or getting new jobs.

Right now for some it must be like living in a nightmare. My heart goes out to them. I’ve been hit financially as many of you have, but I’ll get by. God is good and what is left at the end of all of this might be very different, but I can only face it realising that I never yet met someone who guaranteed me such a thing as a ‘secure’ job or company. If anything has been learned of late, surely it’s a far greater appreciation of the important things; our loved ones and the simplicity we quickly take for granted. How often have we not been thankful for health? Meeting up with someone for a cup of coffee was an everyday occurrence for many, it’s now off the radar completely. I’ll never again be blasé about sitting in Geoff’s with a cool pint in front of me; a fantasy for the moment.

The shaking sadly has left nobody exempt. Rich or poor we’re all the same in this boat. This was brought into stark focus when most found that they were unable to be with their mother on Mother’s Day; Covid-19; the great leveller.

Will we come out of it the better as people? I hope so. For now, the songs have to be sung, the funny memes and videos must be shared, but for the love of God and out of respect for yourself and all of us, keep your distance. Crack on with doing what’s right and keep smiling. It will end, so let’s get through it in a way that future generations in Waterford will be proud when they hear what went on all those years ago during the 2020 Covid-19 Pandemic. They will talk about this as we are now talking about the 1918 Spanish Flu outbreak. We’ve no idea what they wore or did when forced to work from home but future generations have a very detailed and chronological log of our sartorial descent. Wash your hands and put on some Queen.