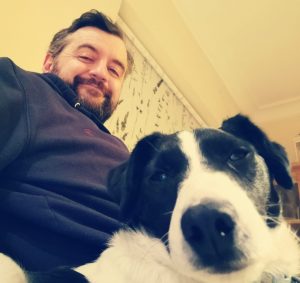 Tuesday, March 31, 11:15am: I didn’t exactly bound out of bed this morning. It’s the first time during this semi-quarantine we’re all living through that I’ve not felt an enormous urge to impulsively vacate the scratcher. Granted, not getting to bed until 3am the night before probably didn’t help. In fact, I’ve been up pretty late for the past 10 days and I’m not entirely sure why. I don’t feel particularly anxious or stressed, certainly no more than I do during ‘peacetime’ conditions, nor do I feel particularly bleary-eyed or stir crazy. But once I’m up, I know that our canine duo require the oxygen as much as any of us bipeds. Buddy and Zippy are tremendous distractions, even if Buddy’s overzealous behaviour on the lead underlines just how much handling he’ll require for some quite some time to come. The thought of him walking to heel is something I’m keen to play a fulsome role in. It’s also noticeable how many more people are out walking at this hour in comparison to, say, between 8 and 9.30am, with the grassy imprint of many pedestrians becoming all the more obvious on ‘our’ side of the Williamstown Road.

12:50pm: The dogs are settled – albeit after further high jump antics by Buddy – while I’m working away on yesterday’s diary entry. I step away from the laptop, fill the kettle and admire our tulips while doing so. Daily activity has decelerated to the point where I, for the first time in my life, can sincerely admire the flowers in our garden – or any garden for that matter. Looking at anything with a fresh perspective is something we should all entertain a little more. That it’s taken a global pandemic for me to do so is somewhat regrettable on my behalf. But here I am, admiring the flowers. And I’m glad of that. 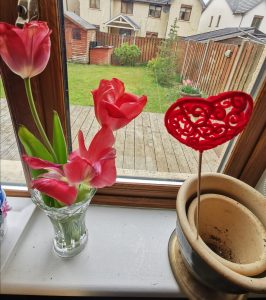 This shutdown has given me time to appreciate things I’ve rarely given a second thought to, including our blooming tulips.

1:45pm: My heart sinks a little after reading a Tweet by Waterford-based paramedic Clive O’Regan. “Seems to be a lot of people out and about in Waterford today, driving and walking,” he posted. “People need to ask themselves are these necessary journeys.” It appears to be far too early in this public health emergency for any of us to be slacking off. I listen back to this morning’s ‘Today With Sean O’Rourke’ interview with Dr Catherine Motherway, the Intensive Care Society of Ireland’s President and her mantra is transparently clear.

“I’m sorry to be repeating myself so often but it is the only thing that will manage to control the surge and we will try and respond to the number of sick patients that come into us as best we can,” she said. “But it is the actions of the population as a whole that will diminish the spread and hopefully control somewhat that peak that we are expecting in about two weeks’ time.” Most of what politicians of any hue are saying right now, however well-intentioned, amounts to white noise. We need to fix our attention on clinicians. They’re the ones who know what they’re talking about.

4:15pm: We get the dogs out for their afternoon ramble and walk past the first Garda checkpoint either of us have seen at first hand, situated where they occasionally check for tax and insurance on the Williamstown Road. However, the two Gardaí don’t stop any vehicle while we walk past them in opposing directions. They’re chatting to two elderly residents who, in all likelihood, haven’t had a face to face conversation with a third party today. It’s a genuinely heart-warming sight. Both the Gardaí and An Post have been terrific in recent weeks. On a sporting note, Michael Garland (a founding member of the Waterford Business Group) spins past me twice on his bike while we’re out, evidently doing laps to keep his fitness up. A proud Scot, I’m grateful that Michael isn’t in his kilt as he careers around Williamstown.

A Garda checkpoint on the Williamstown Road – but not your typical checkpoint.

6:30pm: A delicious homemade curry chip well and truly hits the spot. I feel like I could live on it! After a wonderful meal, I’m feeling a tad listless, at least internally, so I reach for one of the many books that people in jobs like mine tend to buy and pilfer for pending journalistic endeavours. On the third page I open, I find the following nugget from Salman Rushdie. “Our worst natures can, it’s true, be arrogant, venal, corrupt or selfish; but in our best selves we – that is, you – can and will be joyous, adventurous, cheeky, creative, inquisitive, demanding, competitive, loving and defiant. Do not bow your heads. Do not know you place. Defy the gods. You will be astonished how many of them turn out to have feet of clay. Be guided, if possible, by your better natures.” Do what Mr Rushdie said, folks.

8:30pm:  I’ve just watched Episode 3 of ‘The Mandalorian’, the best ‘Star Wars’ has been since ‘The Empire Strikes Back’ and it’s a relief to see the space opera return to form after the decidedly mixed sequel trilogy. It’s got a real old western feel to it, with the Clint Eastwood-like lead character (Pedro Pascal) hidden beneath the tribal helmet we first saw worn by Boba Fett in ‘Empire’. Much to my delight, the lived-in feel of this universe and the stripped-back dialogue has drawn me in. It’s a blessed relief at a time like this to be won over by a tale from a Galaxy Far Far Away. 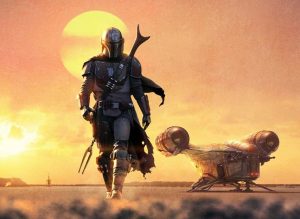 ‘The Mandalorian’ is an absolute treat for this long-suffering ‘Star Wars’ fan.

11:25pm: The hounds get their final walk of what has been another long but thankfully interesting day. For the first time on such a walk, we do not meet a single soul while we’re out, with port activity across the river in Belview providing the only background noise of note – and in saying that it’s nothing more than a gentle hum. For the first time since this shutdown began, I decide not to re-open my laptop to pound out some further thoughts as midnight beckons. Sure there’ll be plenty of time for that sort of thing tomorrow. 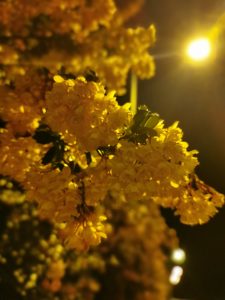 Furze on the Williamstown roadside as midnight beckons.