Well Said: Healing with Tea since 2015

WITH a cheeky smile, in her musical American tone, Marion declares “my name is Marion Velma Ashley, but you can call me anything.” 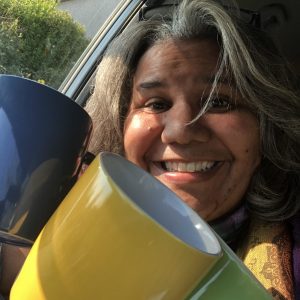 Restrictions regarding physical distance means that my interview with Marion takes place virtually, over Zoom, but it quickly becomes apparent that her vivacity is not dampened by this. Her exhuberance and smile fills my computer screen.

Named for both of her grandmothers, Marion was born in Harlem Hospital in New York City in 1968.

She was exposed early to a caring profession, as her parents met in medical school. Marion’s journeys began early in life as her mother was a psychiatrist with the United States foreign service so “when people ask me where I’m from, it makes me giggle as I’ve really just moved so many times, and, in my head at this stage, I have this beautiful Irish, maybe even Waterford accent.”

Marion has globe-trotted for much of her life, leaving a flavour of her character in many places and adding to her character with rich cultural experiences in New York, Memphis, Nashville, Bangkok, Colorado, Washington, Atlanta, and Paris (where she met her Dublin-born husband, Kevin in an Irish bar in the 1990s.)

Marion chose to keep her maiden name, meaning she brought a little of the Ashley family to join with the Irish Quinn’s when she moved to Ireland with her husband and their two children.

“He never gave me his name, and I never took it, even though we were married twice,” she said, having first eloped with her husband before marrying him a year later in a Catholic Church ceremony.

This less than typical way of doing things offers a flavour of Marion, a woman filled with colour and a mischievous quality.

Living in Waterford captured Marion’s heart so much that it is now the longest she has ever lived in one place, coming close to 15 years.

Initially, Waterford offered a sharp culture shock for this bright, sunny American and she arrived in the height of the Celtic Tiger boom in 2005. There were job fairs and competitive salaries and boundless positivity to mirror Marion’s own optimism.

Why Waterford?… simply put, there was an Educate Together and a Weight Watchers and before the M9 was even a thought, Waterford presented as an attractive option. In her own words, Waterford has served her family well and Marion beams when she discusses the nook she has forged in this corner of Ireland.

When I first saw Marion, she was front and centre in The Book Centre, surrounded by cups of tea, biscuits and a large handwritten sign, which read ‘You, Me and a Cup of Tea.’ Intrigued, I sat back and watched as she welcomed passersby to join her for a cup and a biscuit and a chat.

Join her, they did, and some sat for one cup, others sat for many cups and the conversation flowed all afternoon.

Perhaps this desire to reach out stems from her background in psychology, counselling and psychotherapy, or maybe there is something else with Marion that fuels her desire to connect.

“I’m a lover, I’m a people person, I love connecting with people, I love to empower people as much as I can but at the same time, you can only help those who want to be helped, or want to help themselves when they are ready.”

Marion was made redundant from her role as an SNA in 2015 and during our conversation, the pride she had and continues to have in this role exudes from her.

Not one to sit and fester in sorrow, Marion saw an opportunity to use her Masters degree in counselling and psychotherapy and she completed her student practice in the Rowe Creaven centre in Waterford.

“People in this community are so supportive of me, and so helpful.” And with that in mind, Marion decided she wanted to pursue a way of reaching people in their homes, in their kitchens.

“In the time it takes to boil a kettle and make a cup of tea, I wanted to reach people in their homes and talk about anxiety, maybe autism, little snippets of things over tea.”

That opportunity was afforded to her on Tramore Community Radio for a brief time and Marion found herself shaped by the entire experience, from becoming redundant to coping mentally with not working.

“I was blown over following my redundancy by the kindness of complete strangers. When a redundancy darkens the door, it changes things. I found myself just really stuck, and hurting and upset.”

Entering the Christmas season newly redundant with a young family was a challenging experience but it changed Marion. Her eyes were opened to the reality that Christmas is not always a welcome time of year, with the added costs and emotional demands on those who are struggling in any way. It made her aware of those who have lost a family member or lost their job and she knew she wanted to reach out.

‘You, Me and a Cup of Tea’ was Marion’s way of giving back to the community who she saw as having given so much to her.

Her motto was to give a cup of tea to absolutely anyone in need of one. She recognised the warming properties of tea, as it warms your throat, your heart and your stomach. She recognised the comforting and healing properties of tea, and she coupled that with homemade cookies from her kitchen. Having pitched her idea to Barry’s Tea, they sent her a tin of 600 teabags and it began. 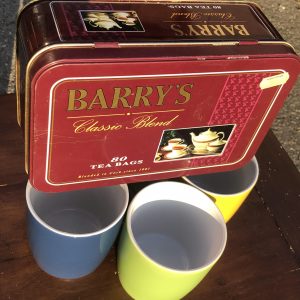 She did it, and continues to do this with no expectation of any thanks.

From St. Patrick’s Gateway, to the Book Centre, to virtual cups of tea, and most recently to dancing and singing in her driveway with a cup of tea, Marion is healing Waterford, one cup of Barry’s at a time.

Altruism is rare and, yet, Marion offers boundless kindness, while asking for nothing in return, simply because she remembers the kindness Waterford once offered to her when she had little of it to offer herself.

There is a touch of sadness, a hint of the unsaid as Marion mentions she is often misunderstood and perhaps ‘too American’, yet she continues to guide others through their individual obstacles, through talk and a cup of Barry’s tea.