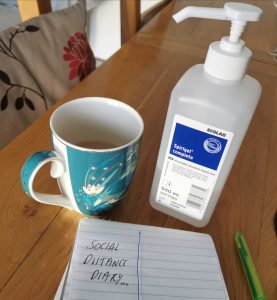 Wednesday, April 1, 8:30am: I’m stood in the middle of the Williamstown Road and there’s not a soul or a vehicle to be seen. Seeing such a customarily busy road completely empty, two and a half weeks into this public health emergency, remains a surreal experience. I make my way to O’Hare’s Londis on the Dunmore Road via The Paddocks to pick up a few basics – and three newspapers. There’s little point in me bleating on about supporting my trade if I didn’t do my bit on that front myself. I’ve also got five online newspaper and magazine subscriptions. I can’t get enough of them, to be honest. I was an avid reader long before I was a journalist and if I ever end up doing something else professionally, I’ll still happily devour the written word.

8:50am: On my way to and from the shop, I walk past an area which is either an impromptu collection point for rubbish or a new public art installation with more than a hint of Tracey Emin about it. Further surrealism. My walk also sees me skirt the perimeter of Saint Thomas’s Church Graveyard in Ballinakill, featuring cut stone grave markers spanning from 1815 to 1965. I’ve never been inside the gate, despite living in this general area for eight of the past 14 years. I suspect I’ll redress that particular balance in the next few days or weeks and learn a great deal in so doing. 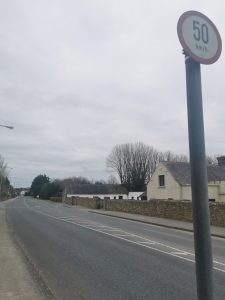 All quiet on the Williamstown Road. 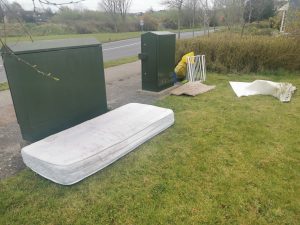 A refuse collection point or an outdoor art installation? 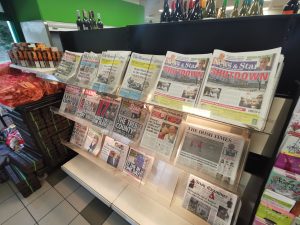 8:57am: I walk back through The Paddocks, taking the less frequented footpath on the left-hand side as I head uphill towards the Williamstown Road. The rejected planning application which would have seen a Dunmore Wing-sized apartment block constructed beyond the opposing footpath springs to mind. Of course, further houses ought to built on an area of land which at present is a mixture of wild scrub and well-maintained lawn – and I don’t know anyone living in and around here who for a second would suggest otherwise. But the single carriageway road that this estate leads out onto doesn’t even have a bicycle lane or a covered bus shelter as of yet. The notion that supposedly ‘well-off’ people out this direction don’t want additional housing to get the go-ahead is wildly misplaced. That there’ll be 49 new houses on a site below Williamstown Glen, a kilometre from here, is good news. The earlier start to the day has clearly provided me with a decent level of headspace from the get-go – and I haven’t even walked the dogs yet. 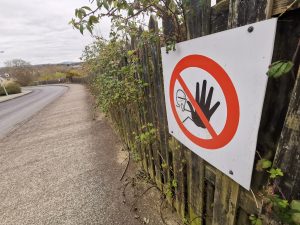 There’ll be more houses in The Paddocks in due course, but not on the scale envisaged a few months ago.

11:20am: News of Chief Medical Officer Tony Holohan’s hospital visit has a lot of us feeling jittery this morning and naturally concerned on a basic human level. Over the past few weeks, Dr Holohan has become Ireland’s re-assuring Uncle, the man we all turn to for guidance and wisdom. Fingers crossed, all will be well. It’s impossible to consider the stress levels he must be experiencing right now.

It’s also impossible to avoid the to-ing and fro-ing on social media about who is responsible for what and who should have done what when regarding the implementation of coronavirus counter measures. Should we have gone into shutdown earlier? Yes, in hindsight, but the idea that I or most of the Twittering classes know better than a clinician about all this doesn’t sit well with me. A message from a UHW nurse carries more weight than all the guff on social media. “I did a 13-hour shift yesterday and I spent the last five hours of it in ICU with an amazing team…I spent five hours gowned up in PPE. My face is now swollen and my lips are cracked and I’ll probably get a bloody cold that I usually get if stressed or (if I) self-neglect.” But she’s not lost her sense of fun, a common trait among those who are at their best when a great many of us are at our worst. “The Guards stopped me on my way home. I flashed my ID. They jumped back from the car – I laughed so hard!”

1:45pm: With yesterday’s diary piece mostly filed, I step away from the laptop and make for the Viewmount letterbox to despatch another handwritten letter. I drive a short distance if only to have the car engine running for a few minutes (the mileage has been decidedly low since last Friday) and end up walking most of the way to the letterbox, which is not as full as it was when I last I visited it 46 hours previously. Yes, that’s right, 46 hours. These are the kind of details one can readily recall on a day when the furthest I’ve been from my kitchen table/workstation is barely a mile from here. I walk past Viewmount House, with empty tennis courts to its rear and the expansive green alongside it, the type of generous greenspace noticeably evident in practically every housing development built in the country since the early 2000s. A few people are out doing some domestic chores while some neighbours are chatting while physically distancing. There’s so much decency being manifested right now in this city and right across the country. It’s tremendously consoling. 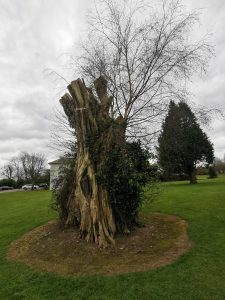 The pleasant expanses of Viewmount Green.

6pm: After another few hours in front of the laptop, Buddy and I hit the trail. Zippy has enjoyed a lengthy walk with herself earlier so he’s kicking it back on the couch in the kitchen. The dog has his own couch? Of course he has! There’s another couch out in the hall beneath the stairs which we’ll probably roll into the kitchen later…for the other dog, naturally. Socialism is alive and well in this new living arrangement we’re all adapting to: four legs good, two legs just as good and what have you. Buddy is at war with every vehicle he claps eyes on during the outward leg of our walk: be it cyclists, skip drivers, creamery trucks and, most evidently, those driving white vans. By the time we turn for home, thankfully he’s not as aggrieved at the sight of any other object, be it organic or mechanised. We arrive back to our lodgings to a lovely welcome. We’d only been gone for about 20 minutes but the positive energy upon our return is greatly appreciated. All kind gestures matter more than ever at the moment. A phone call to the Portlaw homestead confirms that all remains well there. A most consoling thought. 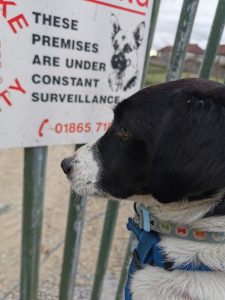 Buddy isn’t the only one considering his future career options at present.

7.45pm: I devote a decent chunk of my evening considering the suspension of democracy in Hungary, a move which ought to outrage people the world over. This represents the greatest test of the European Union since the Balkan War and makes Brexit feel incredibly minor in contrast. Prime Minister Viktor Orbán has been steadily eroding democracy in Hungary for several years, so much so that he has now hoovered up sufficient authority to rule as a dictator. It’s a disgusting development.

11:50pm: As we continue our steady progress through Season One of ‘Star Trek: Enterprise’, a much better show than it was given credit for when it first aired (while I was still in college), it’s time for a short walk with Buddy and Zippy as midnight closes in. A new LED fitting was installed in the street light at the end of our particular row of houses earlier today. This gives rise to the sort of conversation I’d have been less likely to initiate a few weeks ago when we could come and go as we please and shake whatever hand we wanted, although herself and my work colleagues might beg to differ on that front given my tendency to, ahem, over-articulate. Speaking of colleagues, do you iron your pillows? Well, it turns out that Darren Skelton does and Twitter has gone gaga for such a revelation. Yes indeed, the Earth has come slightly off its axis. Good night, all. 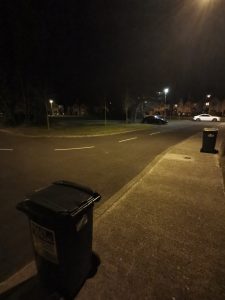 The bin is out for collection the following morning. At least that level of routine hasn’t been amended.