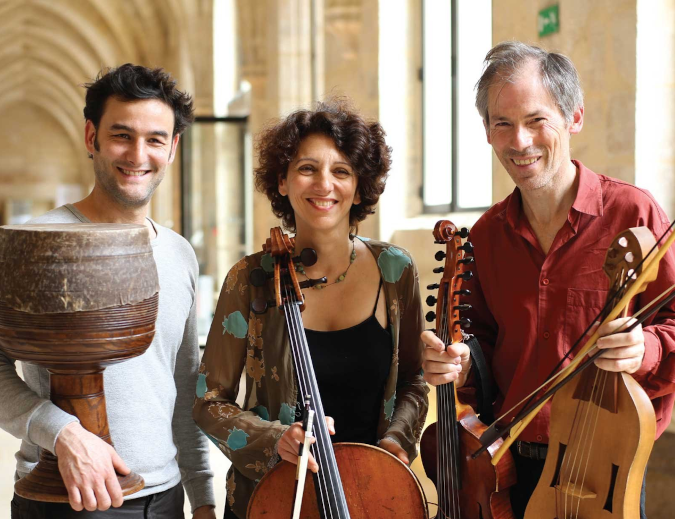 WATERFORD-MUSIC prides itself on the diversity of its programmes. The Salterello Trio certainly ticks all the boxes for a varied and eclectic programme. “Well,” said a regular attendee behind me, “it was certainly different.” Different it was but I’m not sure about the entertainment value.

Leader Graham Knox is a mini-Wikipedia of information. “This is a Viola d’Amore,” explains Greg. “It’s actually got a dozen strings with six under the front six on the finger-board,” although I couldn’t actually figure out a way to play the hidden six strings.

And today being the eve of International Women’s Day, Saltarello opens their concert with an ‘Ave Generosa’ in praise of the Virgin Mary from twelfth century Benedictine Abbess Hildegard von Bingen. Hildegard is one of the earliest and best-known composers of sacred monophony and she’s given us more chants than any other composer in the Middle Ages. The Ave segues into a Guillaume de Machault (1300-1377) courtly love song ‘Tels rit au matin’ that warns that love is fleeting and rarely lasts but manages to say it in a most romantic way.

Saltarello are nothing if not original. Agnes Vesterman dazzles on cello and I find myself fascinated with her playing of the dulcimer, while Sylvain Lemetre plays an arrange of timps, bells, bongs and whistles that amazes and fills me with curiosity. Three Medieval Dances boom around the Large Room and that jump-dance and stamp that is the feature of folk-dances brings me to the Holywood world of Elizabethan costume dramas and court intrigue.

When it comes to concerti, there’s no one more prolific than Vivaldi with almost 600 from an ink-soaked quill and it doesn’t surprise that he’s got seven in the can for Viola d’Amore. With many glisandos from Sylvain on autoharp and passionate pizzicato from Vesterman on cello, Knox has many show-off moments on Viola d’Amore as the melody quickens and slows in the Italian Baroque style.

Melody is at a premium as we return after the interval as the music becomes pared-back and experimental. David Fennessy’s tone poems bring the pictures of Evelyn Hofer to life. “Girl with a Bicycle” is full of the contrasts suggested by the picture of the small child with the over-sized high-nelly. Four doughty football warriors, whose best days are surely behind them, on an uneven pitch are suggested in the Fennessy’s lumpy, clumpy composition although a somewhat disguised melody suggests awareness of the beautiful game. The empty, frosty landscape ‘Mountjoy Sq.’ haunts a gaunt, empty composition. Garth Knox’s ‘Cloak’ is the most interesting piece in a challenging hour, while the concert closes out with some traditional folk melodies that are somewhat more tuneful.

An interesting if somewhat patchy concert from the Salterello Trio at the Large Room. There was a touch of the Marie Kondos about the second half of the concert with any unnecessary melodies ditched in favour of a pared-backed modernism. It’s well to remember that audiences appreciate variety in a concert programme and what floats the performers’ boat doesn’t always set everyone else’s hearts and minds racing.

Phoenix: Railways, what are they?