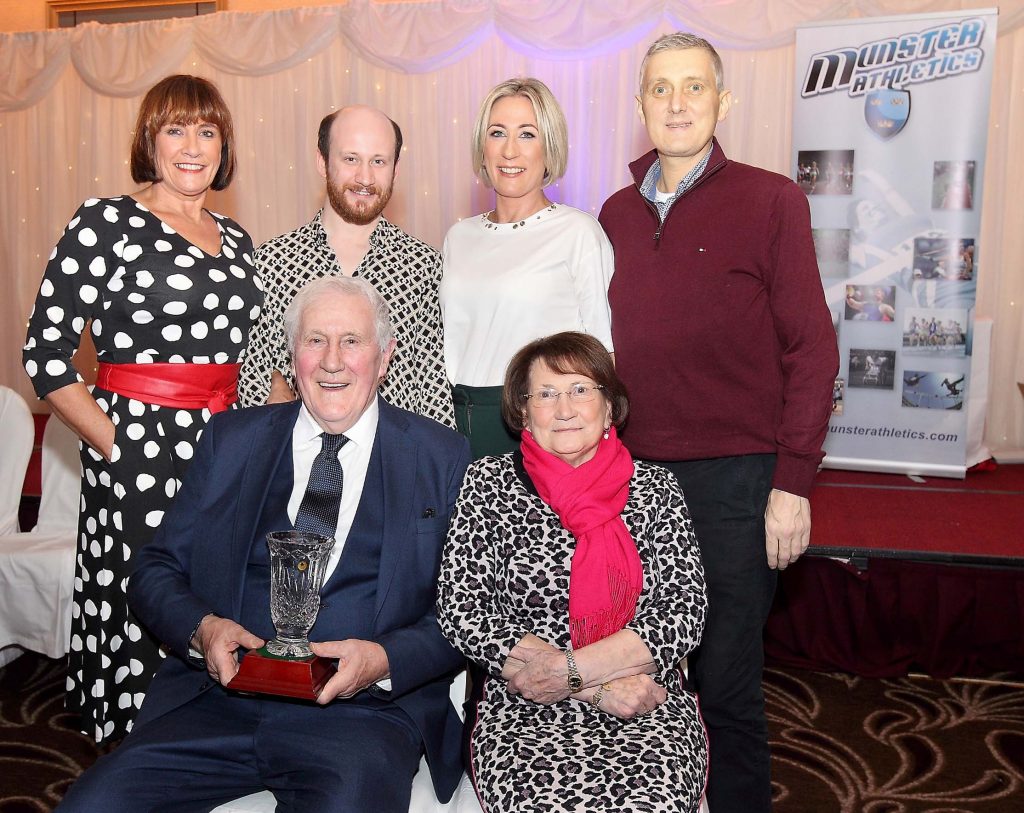 What to do when there’s no live sport on? That is the €1m question.
Well how about pay a small tribute to somebody who has dedicated their life to sport (many sports) here in Waterford. Someone who has done so much for one sport in particular and has never looked for anything in return. They do it because they love it. There are loads of these people involved in sport in Waterford and for that we should be eternally grateful but the person I have chosen to kick off this series with is a man who needs little or no introduction.
He is known as the voice of Waterford athletics mainly because it is virtually impossible to attend a road race, a schools event or a cross country meeting, the length and breadth of this county (and beyond) and not hear the dulcet tones of this man commentating in his own inimitable style. On top of that he reports in this paper (and others) and is a frequent contributor to WLR. He is Fintan Walsh. And on these pages we get a short picture of his life and then have some lovely tributes from main key people involved in Waterford athletics on the contribution he has made to that sport in this county over close to seven decades. 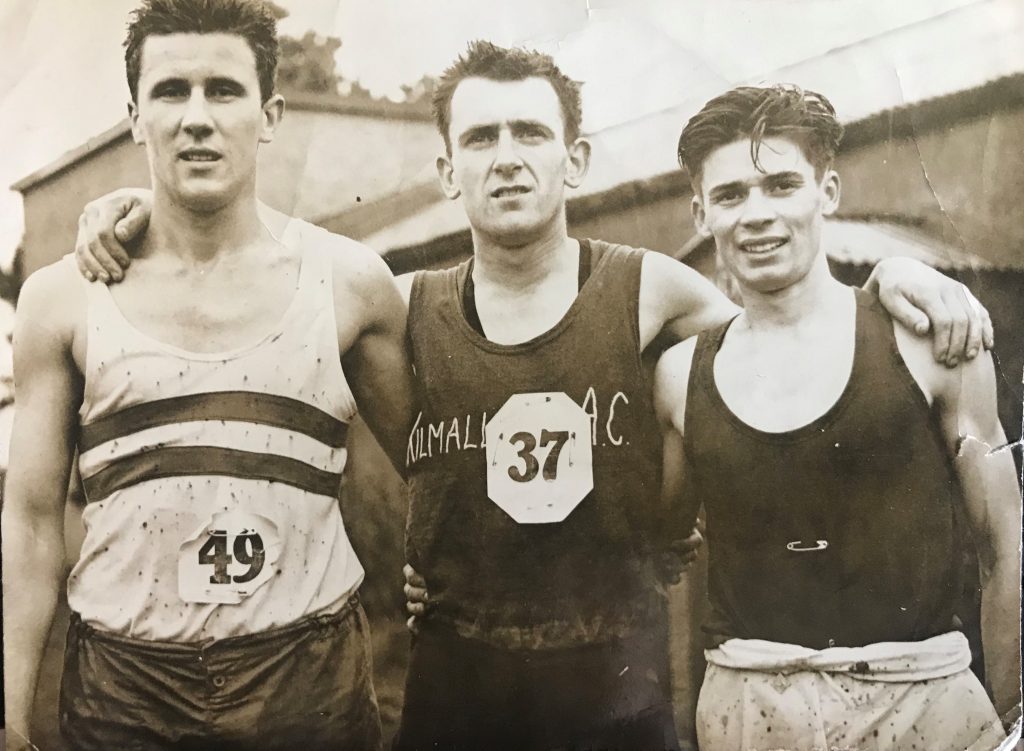 LOVE AT FIRST RUN
As most of you know, Fintan is a very proud native of the lovely village of Passage. After leaving school he went to work in the ACEC Factory and soon he was asked if he’d like to take part in a Factory League. He entered the 880 yards race and won. This was his first introduction to the world of athletics and he was hooked. Paddy Byrne of Waterford AC, who would go on to become a lifelong friend of Fintan’s, was watching that day and asked Fintan if he’d like the join the club. He did so, in the year of 1954, and he has never left.
“I fell in love with athletics from day one. I love and have always loved all sorts of sports but from that first day, athletics was number one,” says Fintan.
The success soon followed. In 1956 he won his first county medal in the mile, a title he was to win several times over the years. In the early 1960s he added his first Munster title to his collection when he won the 800m in Limerick. As well as the mile he was a regular county and Munster medallist in Cross Country and the 400m hurdles. Between 1954 and 1968 he travelled the country as a runner and loved it all. But just as he was thinking about hanging up his spikes, his career took a twist.
“In 1968 I was coming to the end of my running career when I decided to give the Waterford to Tramore walk a go and I won it. That was the start of a pretty successful race-walking career. I turned out to be much more successful at that than the running so I probably should have taken it up earlier.”
Fintan went on to win three National senior race-walking titles and represented Ireland three times including being on the first Irish team to compete at the World Cup of Racewalking in 1973 in Sweden. An event that Fintan recalls vividly.
“I was competing the 20km walk and I was feeling good with about a mile and a half to go. I looked around and I was well ahead of my nearest rival. Then all of a sudden I felt someone getting close and suddenly a Norwegian walker passed me and as he did he turned to me and started to sing, it’s a long way to Tipperary, in broken English. With that he disappeared off into the distance.”
In 1977 Fintan won a Masters Over 40s All-Ireland race walking title over 5000m to cap a wonderful career.

45 YEARS AS PRO
Before that Fintan had already gotten involved on the administrative side of Waterford athletics. He joined the Waterford county board in 1967 and served as secretary from then until 1972 and again from 1975 to 1981. In 1975 he also took on the role of PRO, a position he has held ever since and still does to this day….45 years later. Some going….
“I’ve loved every minute of my time on the Waterford County Athletics Board. I’ve made wonderful friends all over the country and enjoyed some wonderful times.”
As I touched on above Fintan is also a weekly reporter and broadcaster on athletics in Waterford and I dare say that nobody would be as well informed about athletics in this part of the world were it not for Fintan.
He is also known, basically by any man, woman or child that has ever attended an athletics road race or meeting in this county through his commentaries. “I get a great kick out of doing the commentaries. People love to hear their name called out, it’s as simple as that. And people love to be mentioned in the local papers or on WLR and I love doing those too.”
Fintan believes he has been very lucky to involved in athletics in Waterford in a golden era for the sport. “It’s quite remarkable really that the county of Waterford has had at least one athlete at every Olympic Games since 1980. As well as at countless World and European championships, both Track & Field and Cross Country and so many other games and championships. There are few if any counties in Ireland that can boast such a record.”
There is little that Fintan hasn’t seen in Waterford athletics but when I push him into a favourite moment he says, “it has to be John Treacy winning the World Cross Country title in Limerick in 1979. That was magic. I still believe it to be one of the best performances ever by an Irish sportsperson on home soil.”

PASSAGE GAA
Fintan’s other great passion in life, apart from his family, is the GAA and his association with Passage Hurling Club stretches back to the early 1960s when he became the club’s fitness trainer and he’s still involved to this day as the club’s PRO.
It’s no surprise really with his family connections. His uncle, Paddy Donnelly from Passage was captain of the Waterford minor team that won the 1929 All-Ireland hurling championship, even though the final wasn’t played until 1930 due to disputes over overage players. His brother, Paul, won a Dr. Harty Cup medal with Mount Sion in 1953 before going on to have a long association with Hibernians FC.

DESERVEDLY RECOGNISED
Rightly, Fintan has been recognised on a number of occasions for his wonderful contribution to sport in this county, especially athletics.
“I was very thankful to the then Mayor of the Metropolitan District, Cllr. John Hearne for affording me a Mayoral Reception in City Hall in 2017. I am and always have been a very proud Waterford man and that day meant a lot to me.”
And only last month, Fintan was inducted into the Munster Athletics Hall of Fame at their annual awards which were fittingly held at the Tower Hotel here in Waterford. “That was a huge shock. Thankfully they tipped me off a night or two beforehand so all my family were able to be there. It was a great night and I was so grateful for the nomination from the Waterford Co. Board and to Munster Athletics for giving me the award, especially in my home city. Which made it extra special.”
Unfortunately that great night was followed soon after by tragedy as Fintan’s son-in-law, Eamon Foley, passed away in Cashel just two weeks later at just 45. “Thankfully Eamon was able to be with us that night and they are now great memories that we have.”
So after nearly 66 years involved in Waterford athletics, does he still love it? “I enjoy it as much today as I ever did. I love it and the good thing is that athletics in Waterford is now stronger and more popular than ever before. We have a lot of really strong clubs and lots of social runners and the number of road races and the numbers competing in them are higher than ever. We also have two hugely popular events each year that bring athletes from all over Ireland and beyond in the WLR Waterford Viking Marathon and the Waterford AC Half Marathon.”

LOVE SEEING PEOPLE COMPETE
“I love following people’s careers from when they start out as kids all the way through their careers and I just get a great kick out of seeing people competing, no matter what level they are at. I love seeing them enjoying it and trying to improve.”
With so much experience in this great sport behind him, and many years ahead of him, what advice would he give to athletes or aspiring athletes? “To take it handy. Have patience. Stick at it and don’t panic if at first you don’t succeed. I always refer to Olympian Thomas Barr as a great role model. Thomas is the first to admit that he wasn’t the most successful athlete underage but he stuck at it and then he tried the 400m hurdles and he went on to be an international star and a European medallist. We are also lucky in athletics to have so many disciplines so try them all….the high jump, the long jump, hurdles, discus, hammer, pole vault, walking and so on….try them all.” 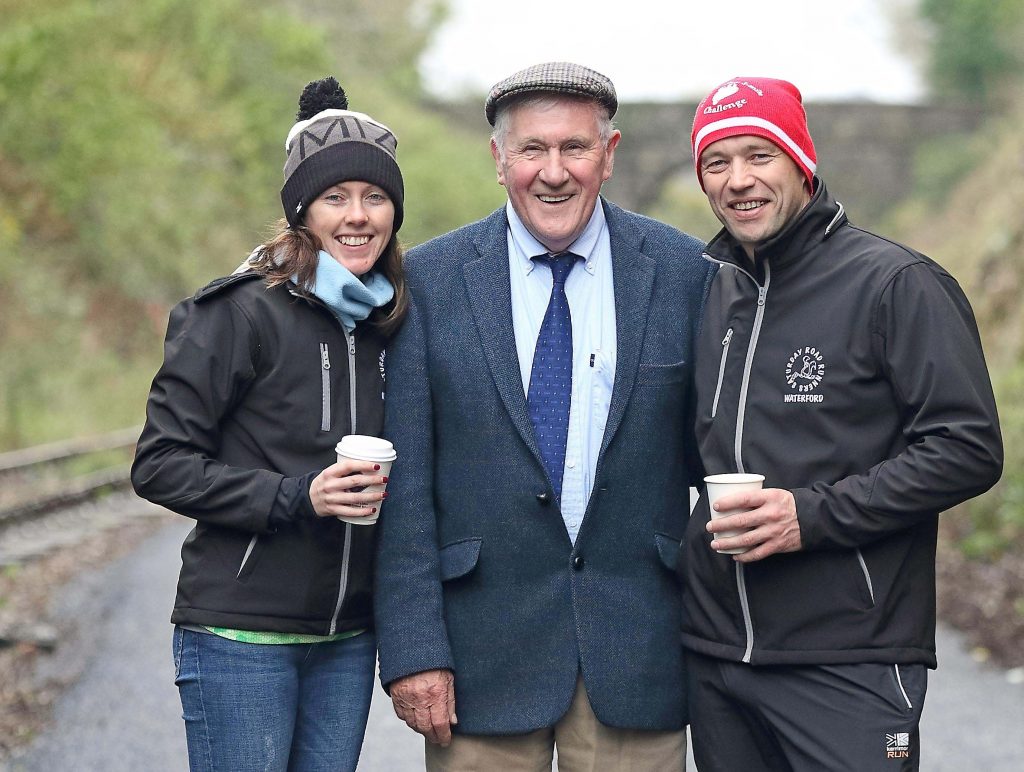 A HUGE THANK YOU
Fintan wanted to take this opportunity to say a huge thanks to everyone he has worked with in Waterford athletics over the past 60 years or more. County Board members, the athletes and members of the various clubs and groups for ‘staying with the sport’ and helping him out with his media duties.
So what’s his wish for the future? He doesn’t even hesitate, “like most people in this county, it’s definitely to see Waterford win an All-Ireland senior hurling title…it’s long overdue.”
As anyone who knows him, and is eluded to in the various tributes, Fintan is a devoted family man to his wife Phil, kids and grandkids and he’s in no doubt that he wouldn’t be able to do what he does without them, especially his wife, Phil.
“She’s always been a tremendous support to me. I’d say many men get killed by their wives for going out too much to sporting events, meetings or social functions but in my house I’d be killed if I didn’t go.”
On top of sport, Fintan has also made a huge contribution to charity over the years especially the Waterford Alzheimer’s Society of which he was chairman for many years.
There you have it. A small insight into the wonderful life of Fintan Walsh, the voice of Waterford athletics and one of nicest, most positive people you could ever meet.