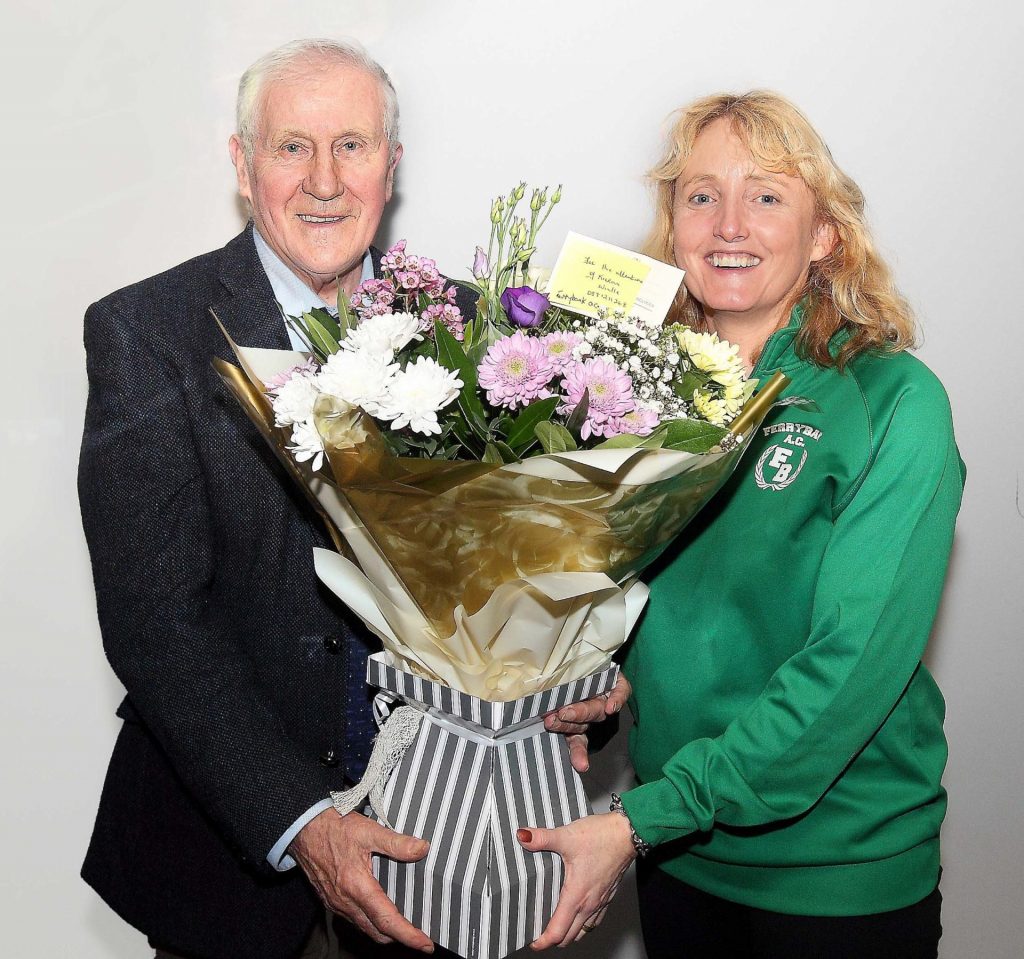 Fintan is an exceptionally talented broadcaster and journalist. His work in the local media both on the radio waves and in the printed media is outstanding. The calibre of his work is second to none and his attention to detail never fails to amaze me. Fintan reports on Waterford athletes performances on a daily basis. The research involved in the formulation of his reports is extensive. His passion for the sport is always evident in his work which he never tires of. Waterford Athletics has been blessed by Fintan Walsh for generations and continues to be.
Fintan has always been a huge support to Ferrybank AC. Back in the 1980s when the club was in its early days, he reported weekly on all the performances of the athletes in the club. Fintan’s joy when he would see or hear of a good performance was always clearly evident. His support has continued through years and I have enjoyed working with him on countless projects and events for the club and county over all this time. Fintan commentates on the public address for all the Ferrybank AC Open Meets, the Primary Schools competitions and all county events on the track, field, cross country and road. His commentary is exciting and engaging and adds to the enjoyment of both spectators and athletes. After each event, Fintan goes home and compiles reports for the radio and newspapers before his day concludes. His commitment is both remarkable and inspiring.
On a personal level, Fintan and I have become great friends over the years. We communicate several times every week and it is a privilege to know him and work with him. Fintan’s understanding of ‘High Performance Athletics’ is exceptional. Simply put, ‘he just gets it!’. Equally, Fintan values and promotes participation in the sport and sport for all.
Fintan is fortunate to have a hugely supportive family. His wife Phil, his children and grandchildren support him in all his work for athletics and also in all the work he does on a voluntary basis for other organisations. As athletics is blessed with Fintan , he is also blessed with such a wonderful family.
The depth of commitment Fintan has given to Waterford athletics over the years cannot be measured. His contribution has been priceless. Thank you Fintan.

Most nights or almost most nights my phone sounds and the caller introduces himself with the words “Well Boy.” Yes you’ve guessed it Fintan on his daily happenings in the world of athletes and life itself. When I first met Fintan Walsh  I was no more than a garsoun running under 10 with the then Dungarvan AC at the county cross country championships held in Tramore that year. Fintan was the man on the loud speaker and to this day his still the man of the loud speaker. Fintan is now legendary for his contribution in both written press and his local radio promotion of athletes.

Before taking to the administration of the sport of course Fintan was an athlete of international standard starting his career in the 1950s. He was a top cross country runner and he excelled at his best athletics discipline race walking with many national titles to his credit in the 60s and 70s and he had the distinction of being on the first Irish race walking team to represent the country at the World cup of race walking in 1973 held in Boras Sweden.

Hardly any phone call will finish between us without mention of his three top topics. His beloved Phil always got first mention I might add, next would be something or other on his native Passage, a place he loves more than life itself and the phone conversation would always end on many occasions with mention of his friend the late Eddie Wymberry and usually one of Eddies stories (some of them I head a few times) but that’s Fintan great fun, always humorous, a great family man and never forgot his roots.

He is the voice of athletics in Waterford with his weekly columns in the local Waterford papers and his sports roundups on the local station WLR and his contribution to the newly formed county athletics Facebook page are just some of his weekly contributions to the sport. He is known to write a great auld song or two also and John Treacy’s world cross country win is among his best penned and of course the one he wrote about the famed Master McGrath the greyhound from Colligan that won the Waterloo cup and he has also some great tributes in song and verse to some of the treat Waterford hurling teams over the years also. Fintan has a love for all things sports including athletics, horse racing, GAA, soccer and he can converse on them all with authority.

One could write pages of tribute about Fintan Walsh but I will close by saying he has become a great friend and a confidant to me in and outside of athletics and it’s an honour to have the opportunity to put a few words down on paper for this tribute, long may he continue to be the man on the loudspeaker. 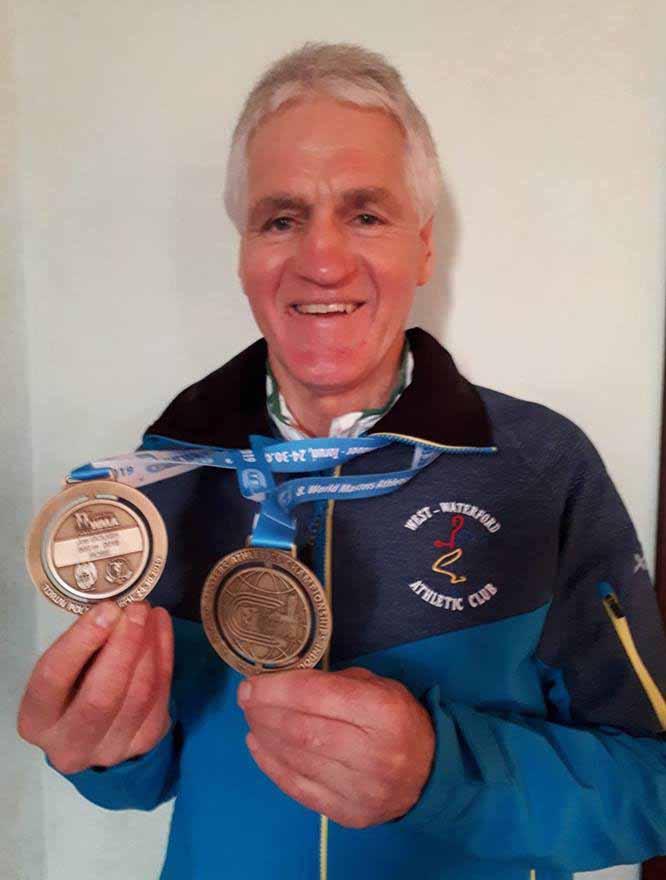 My first memory of Fintan goes back quite a long way. I was a young boy watching the Waterford County Cross Country Championships over a hilly course in Ring on a cold Sunday afternoon and I saw Fintan easily win the race. Not content with winning, he immediately turned around and ran back out onto the course to cheer on his team-mates to victory. As a budding runner myself, I marvelled at how he not only won the race but then returned to the fray to encourage others.

What I witnessed that day were the qualities that Fintan has demonstrated throughout his life as an athlete and as an administrator.

Over the years Fintan became a figurehead in all things athletics. I saw how he inspired others with his positive attitude and persistent competitive perfection. His highly focused delivery on radio was matched by his skills as a writer when reporting on athletics for the local papers. His prose and poetry writing on athletic feats are stuff of legend. No wonder Fintan is known as the Voice of athletics locally.

Personally, I am deeply indebted to Fintan for all he has done for me over the last 30 years of my athletics career, reporting my successes, attending and speaking at various functions and award ceremonies.

My late mother, when she was in the nursing home would avidly read his reports in the paper and listen to his broadcasts on the radio and proudly re-tell what Fintan has said to  all who cared to listen. I think Fintan’s reports probably kept her living for an extra five years!

Fintan loves all athletics and starred in all of them himself – track, field, cross-country, race-walking, road-racing. He supports all athletes from the aspiring child right up to the more senior of us, from the community games aspirant to the Olympic medalists.  He praises and inspires all in equal measure.

Fintan, the athlete, administrator, writer, broadcaster, poet and singer is unique among us and we are all the beneficiaries of his enthusiasm, knowledge and professionalism.

Over the years people come and go from a sport, but with the sport of athletics here in Waterford there is one constant in our sport and that’s Fintan Walsh. In all my years of involvement in the sport from a teen adult to now Chairperson of Waterford Athletic Club, Fintan, is the voice of Athletics for all in Waterford.

Fintan’s involvement with athletics started in 1954, some of Fintan’s achievements over the years are as follows. In 1956 was second in the All Ireland Youths 880 yards, later on in the early sixties was third in All Ireland senior 440 yards hurdles then in the following years won a National Medlay Relay title with Waterford. In 1966 this event was always part of the Irish Championships,  also won a number of Munster middle distance titles 800 metres and 1500 metres  and a Munster Novice Cross Country, Fintan won six County Senior Cross Country Championships in 59, 60, 63, 64, 65 and 66 also 27 County track titles mainly 880 yards and a mile. He then took up Race Walking and won three Irish titles and competed Internationally including in the Lugano Cup in Sweden. 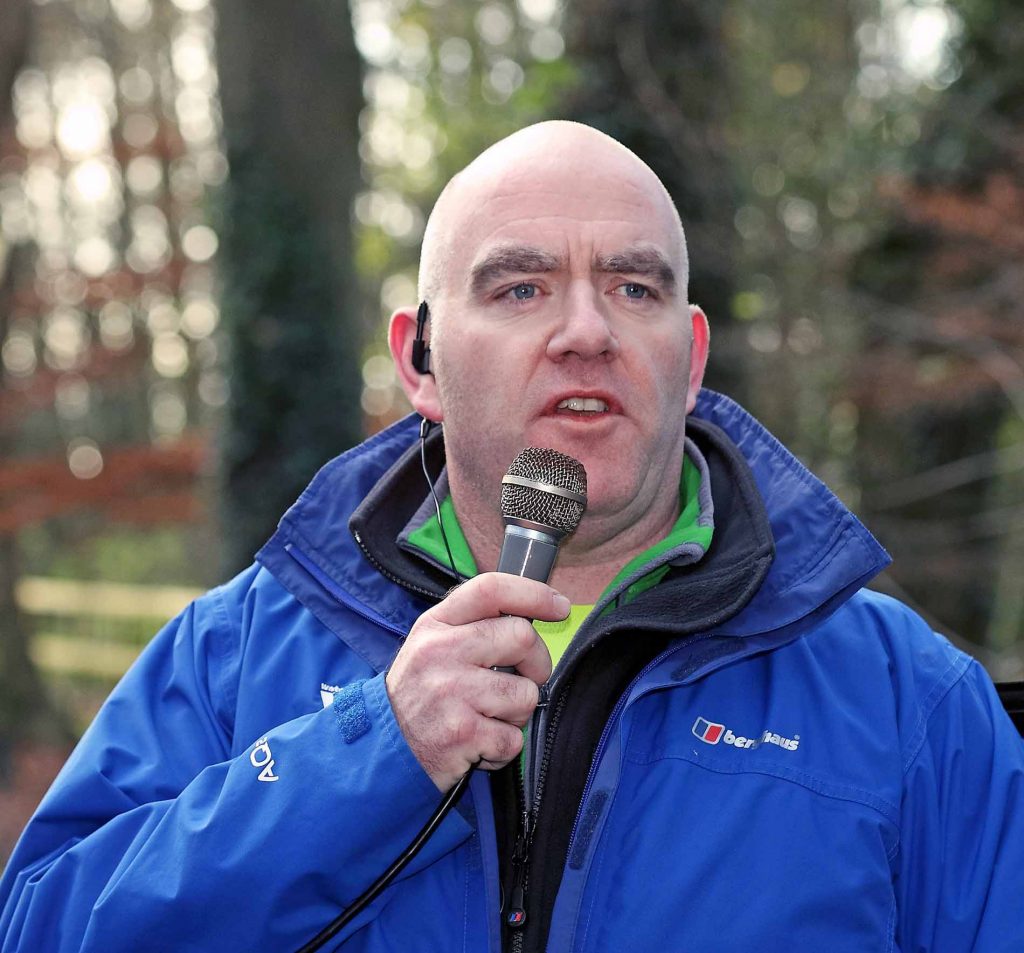 After Fintan’s competitive days, Fintan became involved in the administration side of athletics becoming Secretary of Waterford County Board 1967 to 1972 and again 1975 to 1981 county PRO from 1975 to present day. Fintan is presently PRO of Waterford Athletic Club a role which he’s held and fulfilled for many years, and his knowledge and advice is welcomed to the Club Committee as a whole.

At a recent Civic Reception afforded to Fintan, by the then Metropolitan Mayor of Waterford, Cllr. John Hearne, Fintan, stated that it’s great to be involved with a Waterford sport that has sent at least one athlete and sometimes two to each Olympiad since 1980 including, John Treacy, Patricia Walsh, Brendan Quinn, Susan Smith, Jamie Costin, Jessie Barr and Thomas Barr, and with all our International stars and Waterford’s famous National Senior County winning teams.

With the above names mentioned a wonderful quality of Fintan’s is that he never made any of the above as important or more important than the other. Fintan provides encouragement to all participants in all events equally over his PA System.

Fintan’s love for the Athletics has remained steadfast/persistent through the years. Recently  at the Regional Sports Centre, Kilbarry, he asked what each of the athletes were training for etc and what competitions they were targeting, some aged as young as 15.

It’s an honour and privilege as Chairperson of Waterford Athletic Club, to have a member, friend and passionate athletics person, such as Fintan within our club. As we approach our 100th year, it’s my hope that Fintan Walsh, will still be involved and as passionate as ever in our wonderful club for many years to come. Finally, it’s my privilege to call this man my friend. 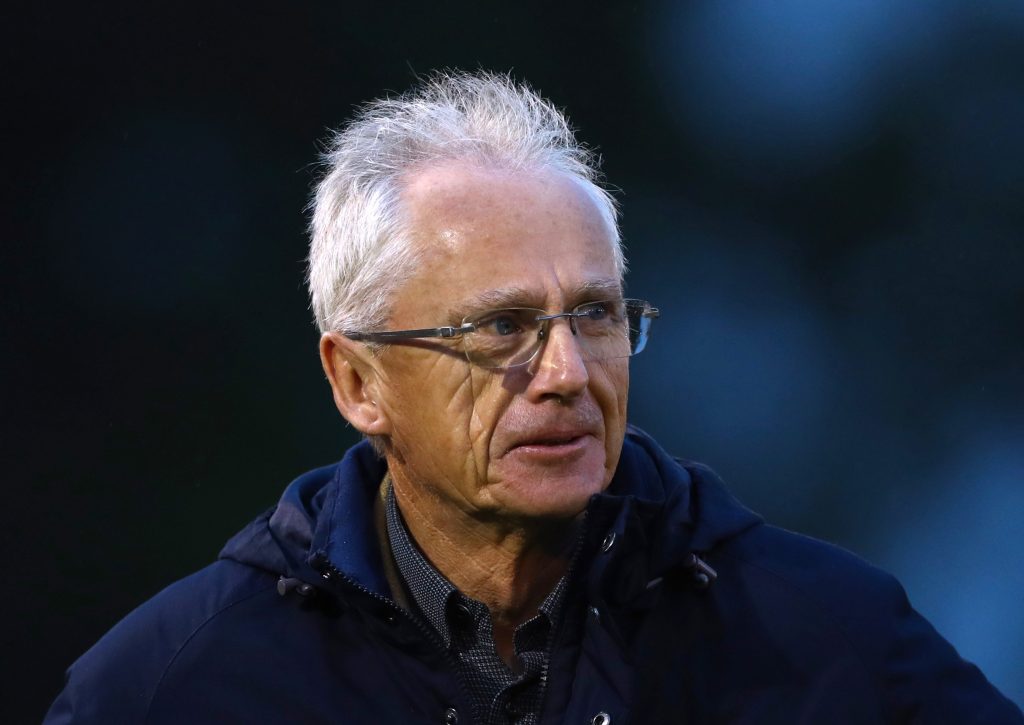 “I know Fintan since the early 1970s and remember him being a fine race-walker. He has always been around and he always seems to be able to come up with a song for any achievement and I know he has one or two about me that I might of been a bit embarrassed by at the time but very appreciative all the same.
“He is without doubt the voice of Waterford athletics and has been fantastic for our sport in our county for so long. Every athlete likes to see their name in the paper or hear it on radio, whether they are just breaking onto the scene or old stagers and Fintan has done this for so long and that is so important for promoting the sport of athletics and keeping it so prominent.
“Well done Fintan and keep it up for many years to come…”