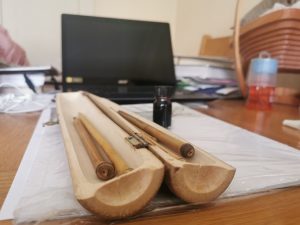 Friday, April 3, 8:55am: I walk through The Paddocks and Farmleigh to pick up a few essentials at the Londis store on the Dunmore Road, where screens have been erected at the shop counter. The staff there are all wearing face masks and getting on with their jobs as best they can with customers thankfully recognising their efforts. En route, I step into the Church of Ireland graveyard in Ballinakill and within moments I’m stood before the grave of Margaret Marion Clarke, British Naval Service Number 10257. Miss Clarke was a member of the Women’s Royal Naval Service, a group which was also known as ‘The Wrens’. She died on January 28, 1941, aged only 18. 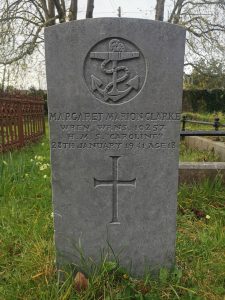 The gravestone of Margaret Marion Clarke in Ballinakill. who died in January 1941 aged 18.

Daughter of Mary W Clarke and Lieutenant Commander Joseph H Clarke RNVR (The Royal Naval Volunteer Reserve), Margaret served aboard the HMS Caroline (the only surviving ship from the 1916 Battle of Jutland) which was sent to Belfast in 1924 to serve as the ‘floating headquarters’ of the RNVR. The vessel was decommissioned in 2011 and re-opened as a museum in Belfast’s Titanic Quarter in June 2016. The Commonwealth War Graves Commission (CWRG) lists Margaret Clarke as a casualty but my initial online query doesn’t elicit any further information beyond that. Many of the mid to late 19th Century plots in the grounds are overgrown while the church itself, home to the Dunmore Badminton Club nowadays, remains finely appointed. I will come this way again and, in time, hopefully learn more about the late Miss Clarke. I shall also board HMS Caroline in due course. 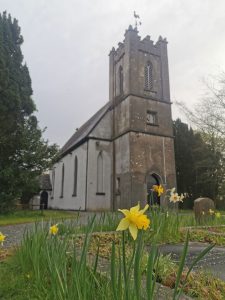 The former Church of Ireland in Ballinakill, now home to a local badminton club.

9:45am: I get Buddy and Zippy out for a quick walk before settling into the dictation of my ‘Well Said’ interview with Ray McGrath. I realise being afforded a thousand words of space might seem like a decent level of column inches for any story but in reality this amounts to approximately 2.7 years of Ray’s life per paragraph. Such pieces often only scratch the surface but hey, word counts matter and are understandably necessary so on I go. I know only too well that there’ll be swathes of quotes provided by Ray that won’t make the final cut, so to speak, which proves fortuitous for the purposes of this diary.

When I ask Ray (81) about how he is coping with the Covid-19 enforced cocooning, his eloquence washes over me like a balm. “I live on the banks of the river here, where the Barrow meets the Suir at Cheekpoint and I often used to say to my soulmate when we’d have words: ‘well, the tide is out now but the tide always comes back in’. So it’s the rhythm of the river which brings solace. I think it leads to a deep optimism, really and that’s what I feel now in this period of my life, not just now during the cocoon period, but in my later years, in my involvement with the Older People’s Council, Waterford U3A (University of the Third Ages) and the various boards that I’m on…just a nice, comfortable sense of you’re doing what you should be doing.” This diary, something I hadn’t envisaged a few short weeks ago, feels a little like that for me right now. I’m glad of its busy-ness.

1:15pm: Herself heats up some homemade pizza for both of us as I continue to work on my Ray McGrath interview. It is only sumptuous and I cherish every morsel of it. I’ve been fed like a lord since this public health emergency began and am so grateful for the food before me and the thought that went into its preparation. For the past three weeks, I’ve developed a deepening sense of gratitude about, well, pretty much everything positive in my life by virtue of having more headspace to appreciate my good fortune. Sure, I’ve got stuff that annoys me and occasionally gets me down but none of that governs me. Stress is not the dominant force in my life any longer and I intend that to remain the case. Otherwise, why bother with or about anyone or anything? 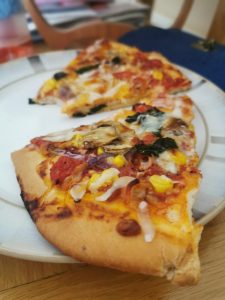 Lunch is served by herself – and it’s simply delicious.

3:07pm: I step out into the garden, having been at my desk for the past five hours. I need to get away from the screen, even if only for a few minutes and it’s great to see the tulips adding so much colour to our relatively humble patch of sward. Buddy has been granted one area out back where he can dig freely. How cavernous a depression he’ll have generated alongside our lettuce patch shall be the subject of much monitoring and in my case, teeth gnashing, in the weeks ahead. Even when he’s unleashing hell upon an unsuspecting plant, it’s impossible not to love the little hound. 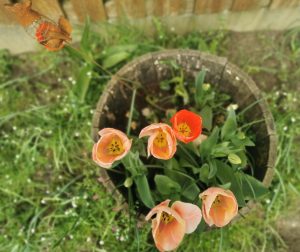 The tulips are coming along beautifully. 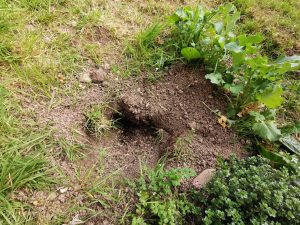 Buddy has been allocated a specific digging area. His progress has been steady, much to my minor chagrin.

3:57pm: The death of Bill Withers (81) flashes up on the corner of my laptop. The writer of ‘Lean On Me’, ‘Ain’t No Sunshine’ and ‘Lovely Day’ was once described as “the closest thing black people have to a Bruce Springsteen”. Remarkably, to my reading eyes at least, Withers didn’t release his first album until he was into his 30s, with ‘Ain’t No Sunshine’ originally released as a B-side to his single, ‘Harlem’. The former eventually reached number three on the Billboard charts, spent 16 weeks in the Top 40 and won the Grammy Award for Best R&B song. In an interview with ‘Rolling Stone’ in 2015, Withers said: “I’m not a virtuoso, but I was able to write songs that people could identify with. I don’t think I’ve done bad for a guy from Slab Fork, West Virginia.” Not bad at all, I’d say. Rest easy, Bill. Thanks for the tunes.

4:35pm: I pop my latest handwritten letter into the postbox at Viewmount and swing briefly into the Tesco/Next/Homebase/Costa car park at Ardkeen to see just how busy it is. It’s relatively well populated but certainly couldn’t be described as thronged. However, on the basis of what I’m hearing and reading from elsewhere, there appears to be too many of us out and about, almost a week after the additional restrictions were introduced. Might further recommendations s kick in beyond Easter Sunday in a bid to further flatten the curve? Right now, I wouldn’t rule anything out. No-one can. 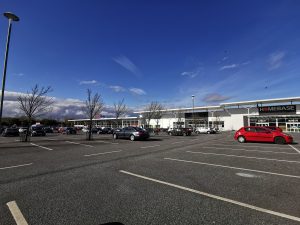 The Tesco car park at Ardkeen was relatively busy during the late afternoon.

8:25pm: I run two miles and then jog a further three quarters of mile on top of that, along a triangular shaped route behind Bishops Field, which brings me into the countryside, back in by McGinn Park, the home of Ballygunner Hurling Club and back onto the Williamstown Road. Along the narrowest part of the route, I meet a bunch of kids who are having their cycle lit by a de facto ‘support’ vehicle. I try to run away from them while running around them – which I hopes makes sense – slaloming past their immediate environs when I initially meet them, parked stationary near a farm gate. In the twilight, I find myself questioning the wisdom of having children out on bicycles at this hour. Then again, I wouldn’t blame anyone I passed by wondering what on Earth I was doing running along an unlit country road when there were fully illuminated options available to me within our two-kilometre radius. Right now, there’s little to be gained by thinking any of us have a monopoly on either knowledge or common sense. 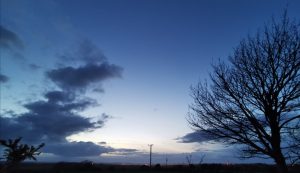 A half-mile from home after my latest anti-social run.

9:15pm: With relish, I devour my dinner following my run and shower before settling into two episodes of ‘Star Trek: Enterprise’, which I am enjoying enormously on this particular re-watch. I pop on a load of washing on as well before thoughts of the evening’s final dog walk ultimately take me beyond the midnight hour. Another day in and around the comfort home affords me has proven welcomingly full.