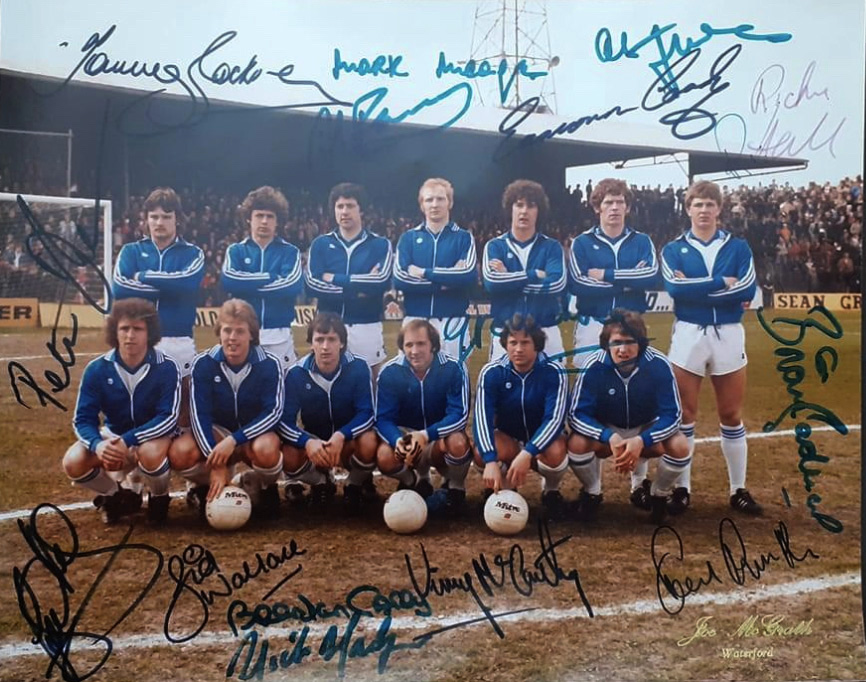 We reproduce our late colleague Leo Dunne’s (LPD) (pictured below) match report that appeared in the Waterford News & Star on Friday, April 25, 1980, after an historic FAI Cup Final win over St. Patrick’s Athletic at Dalymount Park 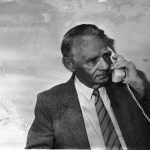 An exultant roar filled the skies over Dalymount on Sunday to signal an end to 43 years of loneliness and frustration for Waterford football followers. The barrier at which so many Waterford teams had stumbled and fallen at last cleared, a Cup had been won, and the pent-up emotions of two score years and more were released in that ear-splitting acclaim that greeted victory long overdue.
One magic moment from 21-year-old full back Brian Gardner, a header of stunning power and accuracy after 22 minutes play, saw Waterford win their second Cup at the hands of worthy opponents in St. Patrick’s Athletic.
From there to the end of a game that contained its fair share of exciting moments without ever reaching classic standards, Waterford supporters lived on the rack as they sweated out to the final whistle, hoping for another goal, yet fearful that the hoodoo that had haunted the club for so long would find a way to strike again.

HURT WIPED AWAY
When the long whistle sounded, it was as though 43 years had been wiped away in an instant. The disappointments and failures of the past were forgotten, and a new breed of heroes emerged in the thirteen white shirted players, who had given all they knew in the game and through the rounds to bring the Cup back to Waterford.
And the thought occurred as surely as if the past had never been that it will hardly be another 43 years before another Cup is won. There is in this current crop of players a steel such as we have not known before. There is an attitude about them that bodes ill for any opposition, and more than anything else, they have shown the collective courage to shrug aside the fears that haunted many great Waterford teams of the past whenever Cup time rolled along.
Now that the biggest barrier has been broken, who is to say what lies ahead in terms of Cups to be won, and there is every possibility that from here on in, it is going to be regarded as our favourite competition.
Before that much came to light, there was anxious moments on Sunday in Dalymount when we were entitled to wonder whether the Cup would come our way at all. St. Patrick’s Athletic surprised most onlookers with the positive brand of football they displayed. They had been portrayed to us as a dour defensive side with few attacking ideas, but they came at Waterford in a manner that gave no room at all for complacency.
Indeed I have to admit that had St. Pat’s scored an equalising goal, I would not have found room in my heart to begrudge it to them. Few neutral onlookers would have denied the losers the right to a replay, but of course, there had to be very cogent reasons why a second bite of the cherry was denied to the Inchicore club. 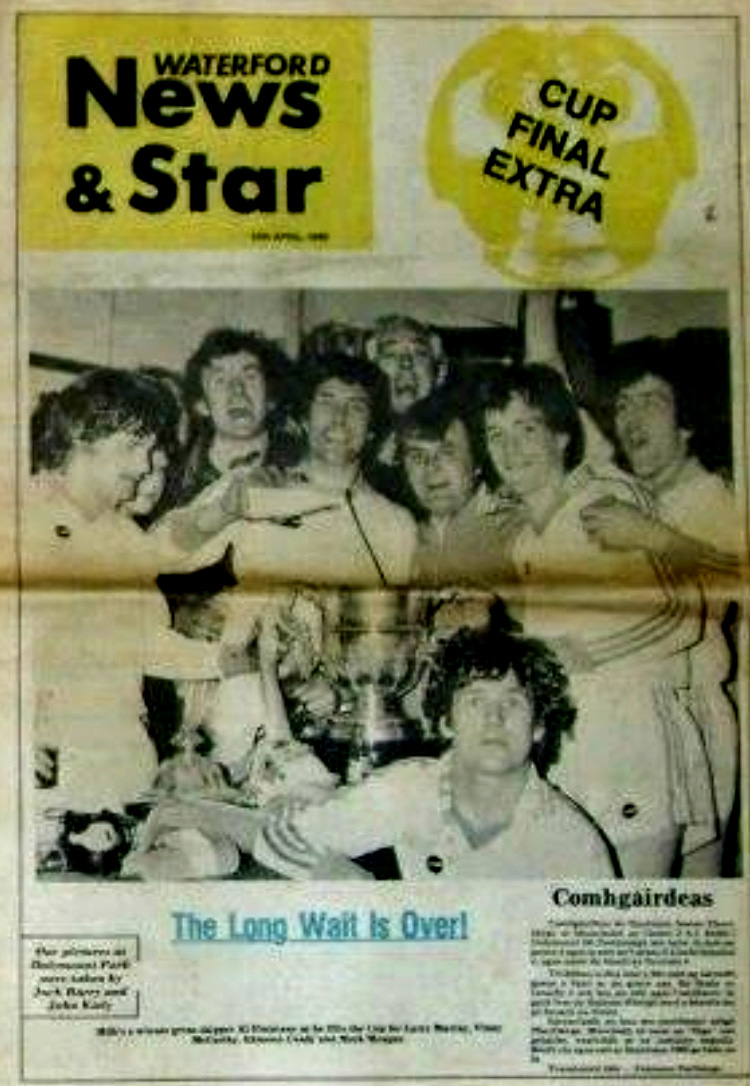 The Waterford News & Star supplement to celebrate the great day back in 1980.

BRILLIANT THOMAS
First and foremost among those reasons was the brilliant display of Peter Thomas on the Waterford goal. It is surely indicative of the trend of the game when the goalkeeper on the winning side earns the Man of the Match award, an honour for which I thought Brian Gardner was the only other player in contention.
Six minutes before half-time Peter Thomas once and for all atoned for his errors in previous Cup Finals when he dived to his right to bring off a fantastic one-handed save to a shot from Jackie Jameson that bounced off the bumpy Dalymount sod. This was a save that called from reflexes of the highest order, matched only by the sheer bravery that followed in the first minutes of the second-half when Peter Thomas came to deny Niall O’Donnell.
Waterford followers held their breath on the hour when a volley from Paul Kirwan flashed inches wide, and five minutes later there was gasps again when Thomas went down at the feet of the same player to make another excellent save.
The handling of the Waterford goalkeeper all through proved impeccable, as was his timing and judgement, and Peter Thomas became just the inspiration that was needed on the day. He was one of the key Waterford players that functioned and while the same can hardly be said of everyone, it must also be said that no one lacked for application or for volume of effort.
I thought in advance of the day that Waterford’s defenders would heavily outnumber St. Pat’s attackers, but this was hardly the case. Jackie Jameson proved the main, perhaps, the only torment in the Pat’s front line, but he was always well supported, and the Waterford defence had to work as hand in any previous round.
Quite apart from his goal, Brian Gardner played brilliantly on the left, adding to the rapidly rising reputation, and he was another who was obviously in a frame of mind that did not brook defeat. Ger O’Mahony may have been less sure of himself on the right, but he got through a lot of work and made a couple of timely interceptions when it looked as if danger was very much on the way.
Waterford tend to rely heavily on Tony Dunphy and Al Finucane in their role of central defenders, and they were not disappointed on Sunday. Tony Dunphy has all his work cut out to cope with the wiles of Jameson, but the big Pat’s forward was seldom seen inside the Waterford area, and he was blotted out when Al Finucane moved across to mark him with twenty-five minutes still left to play.
This move followed instructions from the bench, and as the effectiveness of Jameson diminished, so Waterford’s prospects of taking the Cup appreciated by the minute. Tony Dunphy and Al Finucane saw to it that there was never an easy road through the middle, and only after the game did it become known that Dunphy that played the second-half with a chipped bone in his shoulder.

TENSION PLAYED A PART
Tension, undoubtedly, played its part, but it became a rare thing to see a midfield man kill a ball and stroke it around. The quality of the pitch hardly helped, and over the ninety minutes, any neat moves that developed came from the Waterford trio.
Mick Madigan and Vinny McCarthy showed combination along the left of an order that the losers could not match, and they caused several moments of real trouble in the St. Pat’s defence. While they held a definite edge with Mark Meagan making most of the midfield running along the right, it has to be granted that all three saw better days in games against Limerick.
We had been led to expect a great deal from the St. Pat’s defence, and it has to be said that the last line did not let their side down. Veteran Willie Roche, grey hair and all, looked a picture of calmness and composure as he dealt in his relaxed way with the work given to him, while Barry Murphy put heavy shackles on big Paul Kirk. Little enough was seen of Larry Murray, but he proved a match winner on the day, and Sid Wallace put in much useful work before being stretchered off near the end with an ankle injury.
As in the semi-finals, Tommy Jackson came on to replace Vinny McCarthy in the final quarter. Again his influence proved decisive, and his appearance one of the many match winning factors for Waterford Eamon Coady came on to replace the injured Wallace. 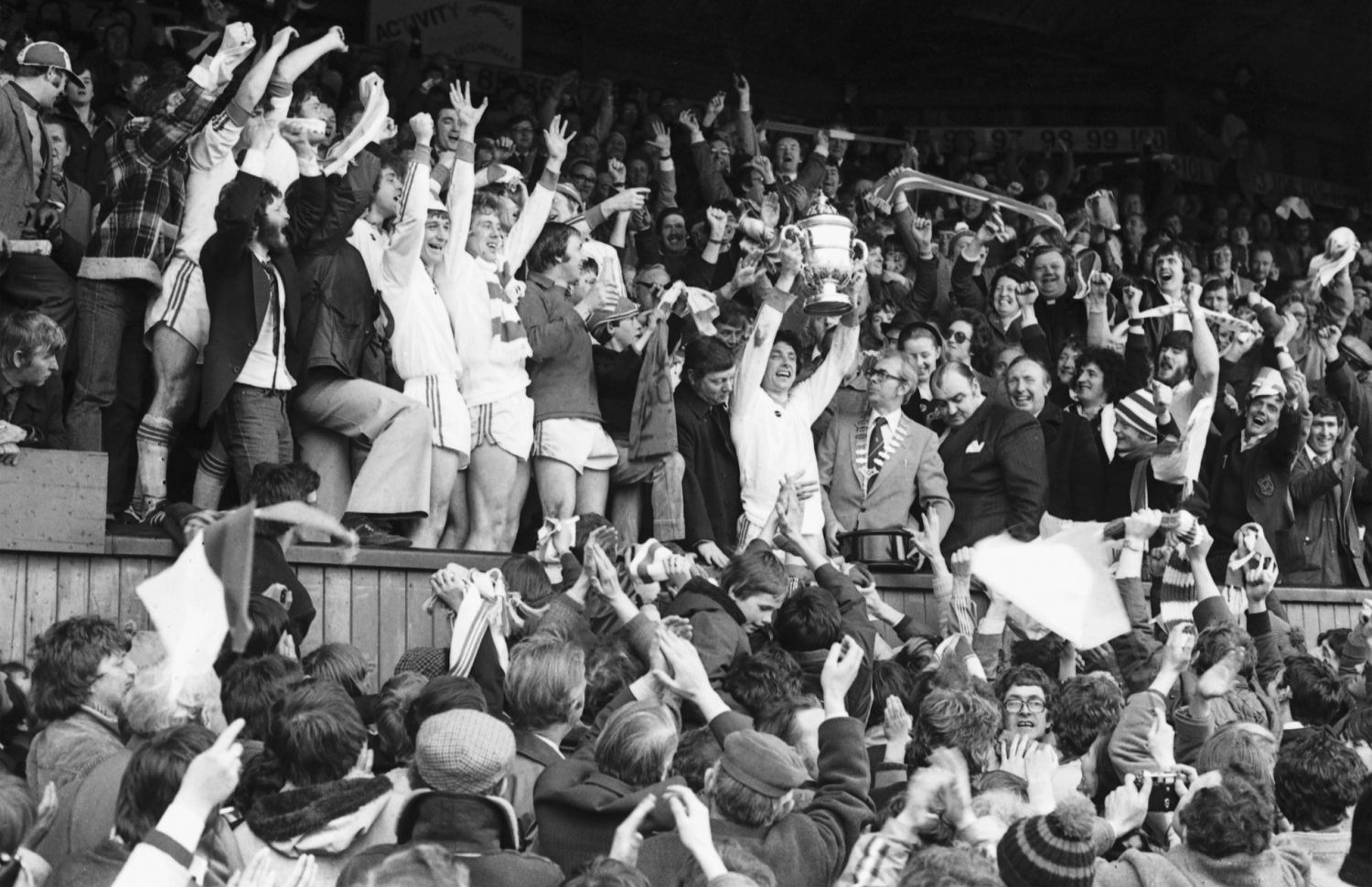 CUP WON AND LOST
Looking back on it all, neither Larry Murray nor any of the Waterford supporters, who violently disagreed, should really have been annoyed when he wasn’t given the advantage by referee Kevin O’Sullivan following a foul near the end line by Munnelly after 22 minutes.
However fate and referee O’Sullivan ordained otherwise, and in this unlikely moment in a manner no one could have suspected the Cup was won and lost. Larry Murray himself took the free, a couple of yards outside the box and a couple of feet from the endline.
I wondered why he should cross so hard. I didn’t see Brian Gardner steaming up the left, but I did see him connect with that powerful and so accurate header that flew past Jim Grace, struck the inside of the far upright, and rebounded into the net. It was the first goal a Waterford player had scored in a Cup Final in 21 years, and it was enough to win the Cup in 1980.
WATERFORD FC: Thomas, O’Mahony, Gardner, Finucane, Dunphy, Meagan, Kirk, Madigan, Wallace (Coady `82), McCarthy (Jackson `73), Murray.
ST. PATRICK’S ATHLETIC: Grace, Higgins, Munnelly (Daly `77), Roche, Murphy, Malone, O’Donnell, Carthy (Wright `77), Jameson, Hynes, Kirwan.
Referee: Mr. Kevin O’Sullivan (Cork).