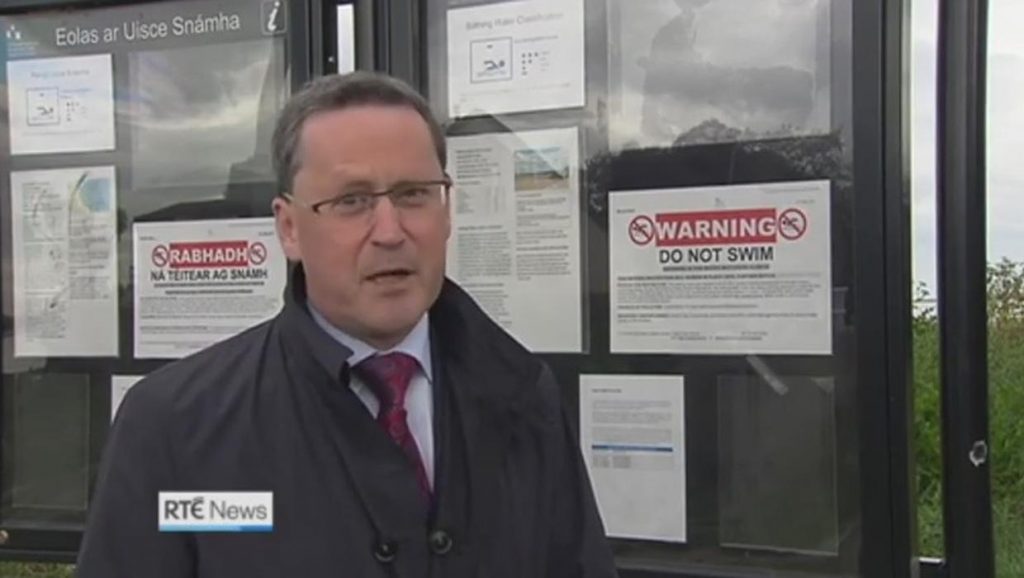 I’M afraid of George Lee. As a matter of fact, I’m really afraid of George and I’ve taken to watch the news from behind the sofa. It’s the urgency of George’s message and the intensity of his gaze that gets to me. The sentences are delivered at rapid fire as if his Zoom time is about to expire. And us with it.

There’s a sense of shock and awe about the deadly-in-earnest delivery. In those deadly-serious spectacles of his, it’s just about audible and really requires a rewind to catch it all. That’s if you’re brave enough. Last night, he appeared in a white lab coat in a sort of hot-from-the-lab-face-direct-to-camera piece with a “we’re all heading for hell in a handcart” mantra. Remember those lab coats in the seventies commercials for washing powder? Only ‘experts’ got to wear them and say things like “how would you rate your washing, madam, out of ten?”

No sense of catastrophe is great enough for this chap. In fact, when catastrophe approaches RTE turns immediately to George. As Finance Correspondent George told us that the banking crash would have us in hoc until the next millennium. When he was Agricultural Correspondent, the agricultural industry would never survive. Moving on to Environment Correspondent, we had programmes with boats floating up O’Connell St. Now as Science Correspondent, no progress is ever enough.

‘We’ve been spending so much time making sure the plug stays in the bathtub that we’d forgotten that we had to add more hot water.’

To be fair and (whisper it) behind it all, I actually like George. I’m guessing that he’s a genuine guy. There’s a sense of concern for us about him and an intimacy to go with it. But I so wish he’d lighten up. Maybe tell a joke. Or sing a song, even. Or audition for Dancing With the Stars, maybe. There’s a fair bit of info floating around in that polymath brain of his. Finance, Agriculture, Environment and now Science. Now – that’s what I call a resumé. Renaissance Man was never as well informed. But when he dons that lab coat of his… well then folks, it’s time to hide behind the sofa.

That’s the problem with catastrophe. Nothing is ever enough. And no matter how many sacrifices are made, the science says it’s never enough and we must listen to the science because rattling the scaffolding is unpatriotic. Fit and active over-70’s are ‘vulnerable’. Yeah… rrrrright! 2km? Mmmm. It’s not so long since the Fools and Horses Cheltenham Festival took place or a plane load of migrant workers here arrived to pick fruit. Because they couldn’t be stopped and they were all tested before they came. No cocooning required here. Well… wey-hey! A young and very friendly Garda told me a couple of days ago that it was alright to come back to Tramore seeing as how I lived there. Well… lucky me! If the docs have their way, we’ll be at this until there’s a vaccine and everyone has got it i.e. two years or so!

Like everyone else, I miss my life. I miss seeing my children and my grandchildren. I miss meeting all those wonderful people who are incredibly proud of all they do for the arts in Waterford and delight in meeting each other. I miss their work and their talent and their enthusiasm and their ability to make the ordinary extraordinary. Like Wayne Brown’s wonderful Sunday Nights on Waterford Theatre Archive with a weekly audience of 6,000 viewers from Waterford theatre-fans-and-artists. Amazing! Nature-lovers advice doesn’t cut it with me because no amount of feckin’ flowers or bloody peach trees in bloom will ever substitute for the invention of another human being. Quite simply, I like people. Let’s face it: If flowery plants were more interesting than people, then we’d have one of them sitting in the corner instead of the telly.

So, politicians… ramp up the testing, speed up the tracing and study our investment in our health system, which is the seventh highest per capita in the OECD. When all this is over, make changes. Carpe diem and all that. Institute a national crèche and pre-school system, with proper checks and trained staff, for the entire country. Stop manufacturing statistics to justify underinvestment in UHW and WIT. Do we always have to have a minister in a constituency to provide infrastructure that should be there by right? And what chances, by the way, of a Déise minister in the next Dáil? Snowballs and hell come to mind!

Plan B has finally escaped from its cocoon folks as I write. Some hope. A way forward. Because if we continued on like this, there would be no country left to open. We’ve been spending so much time making sure the plug stays in the bathtub that we’d forgotten that we had to add more hot water.

Ultimately, we may have to learn to co-exist with Corona.