Diary From A Social Distance: Tuesday, May 5 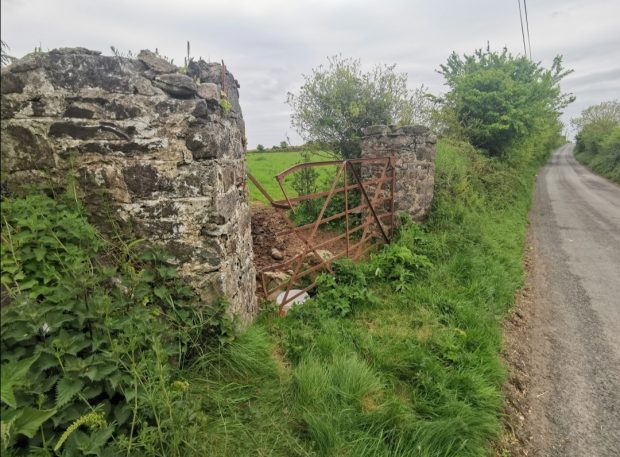 Tuesday, May 5, 8:48am: I cannot believe I’ve slept until almost 9am. I’ve slept for almost eight hours, probably due to running with an attempted injection of pace last night and I feel all the better for it. Sleeping longer, eating better, running faster: it’s like I’ve woken up in 1996. A quick jolt back into reality awaits when I pop downstairs, having issued my good mornings to both Buddy and Zippy, as more pandemic headlines await on my various devices.

‘No clamouring for end to lockdown, government told’: so says the Times Ireland edition “Pete Lunn, head of the behavioural research unit at the Economic and Social Research Institute (ESRI), told The Times: ‘Believe me, there is no clamouring in our data for lifting restrictions, the majority of people are actually quite scared and worried about it. The majority of people think there is likely to be a second surge and are really quite nervous about restrictions being lifted. So it’s a vocal minority that is crying out for restrictions being lifted.’ The government reported that 16 people with Covid-19 died yesterday, there were 266 new cases. There have now been 1,319 Covid-19 related deaths in Ireland, and 21,772 confirmed cases.”

‘Pubs may reopen sooner if they can enforce social distancing’ is the headline of Pat Leahy’s lead story in this morning’s Irish Times. “As business groups begin to work out what the proposals to ease Covid-19 restrictions over the summer will mean for them, senior Government figures have indicated that they are prepared to amend the Reopening Ireland plan if the decline in the spread of the virus continues, and businesses show they can enforce social distancing…In a sign of creeping frustration with the lockdown, figures obtained by The Irish Times show road traffic increased more than a third over the weekend compared to the Easter bank holiday.”

Page 2 of the Irish Independent is dominated by the headline: ‘Claiming Covid-19 is God’s punishment is blasphemy’. Bishop Brendan Leahy of Limerick told Sarah McDonald: “God can draw good out of everything – even out of evil, and so maybe we can learn lessons at this time…While I don’t want to underestimate the numbers that have died, thank God we didn’t have the surge. There has been great social cohesion with people wanting to help each other – we managed to pull together at a time of crisis.” 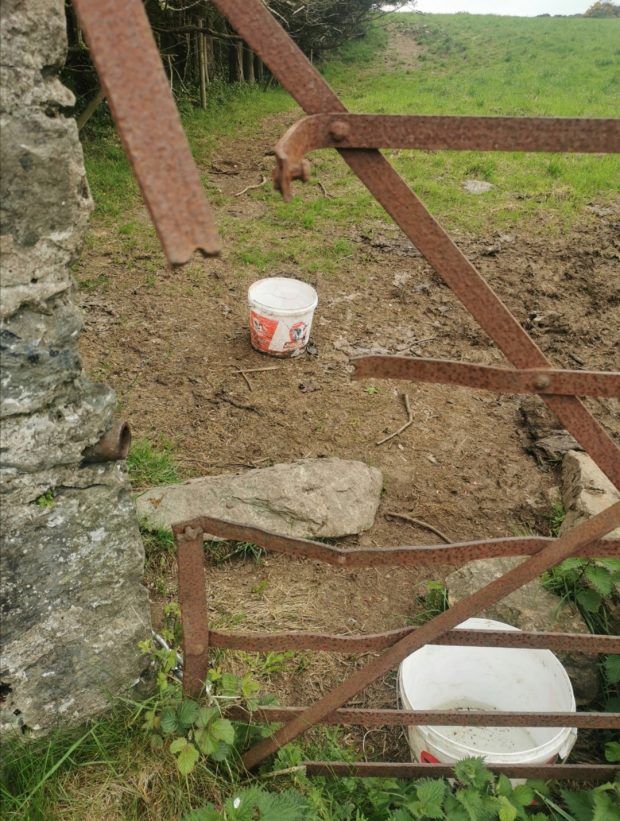 Worn by work and time: an old farm gate I pass during my morning walk.

10:37am: I bring the dogs out for their first walk of the day and we ‘keep it country’ by hanging a left beyond the terminus of ‘Footpath Incomplete’. There’s an easterly wind blowing and it’s a distinctively characterised morning, not something we’ve had a great deal of lately given the settled weather of the past six weeks. There’s a quilt of grey cloud over us. It’s slightly bracing. It’s my kind of weather, to be honest.

There’s a set of old farm gates about three quarters of a mile down the road and its piers are set at a distinct angle, away from the tarmac. I can’t help thinking that the road I’m strolling along may not necessarily have been the established route here at a time when the only wheels careering down here belonged to tractor drivers and cyclists. One side of the gate is gnarled and buckled. It’s probably been that way for years. The piers and the wrought iron gate are like outdoor museum relics. The chances are those piers will still be there long after I’ve gnarled, buckled and rusted over. 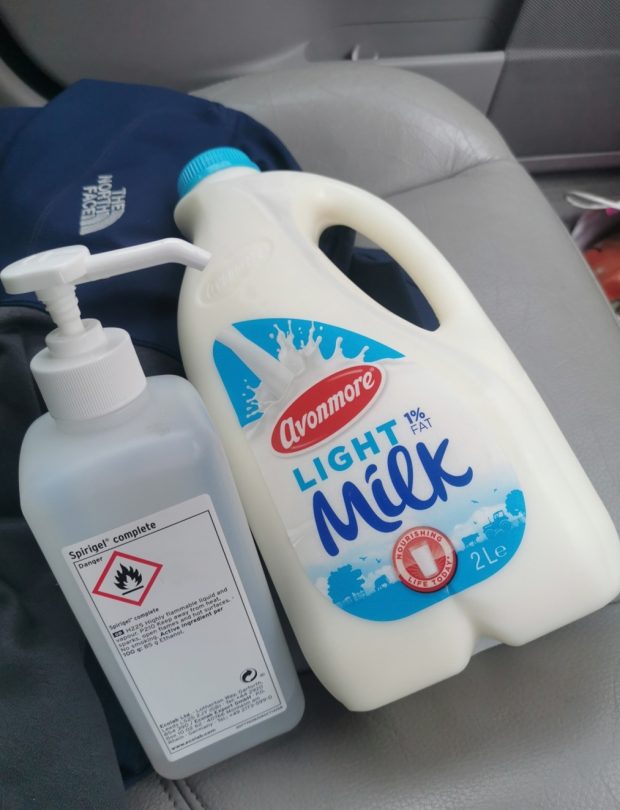 Some of the staples of this pandemic in my passenger seat.

11:27am: I get back home having ventured out to O’Hare’s on the Dunmore Road where I bought four newspapers – two for my domestic ‘archive’, one for herself and one for delivery in due course. We’ve produced an 80-page paper today, twice the size of our local competitor. It’s another huge collective effort. In difficult circumstances, newspapers are doing a very good job, in my view. This pandemic may well accelerate our shift towards a more intensified digital platform and if anyone in our game stands still now, then we’ll be a lot more gnarled, buckled and rusted than the gate I saw this morning.

Alan English, the new Sunday Independent Editor, has just been interviewed by Sean O’Rourke on Radio One. It made for fascinating listening, particularly for nerdy media types such as myself. I suspect it will be a long, long time before a regional newspaper editor (English was at the Limerick Leader helm previously) makes the jump to a national editorship. I’m glad Alan is where he is and it will be interesting to see the paper evolve under his leadership. With milk also acquired, I head for home. There’s work to be done. 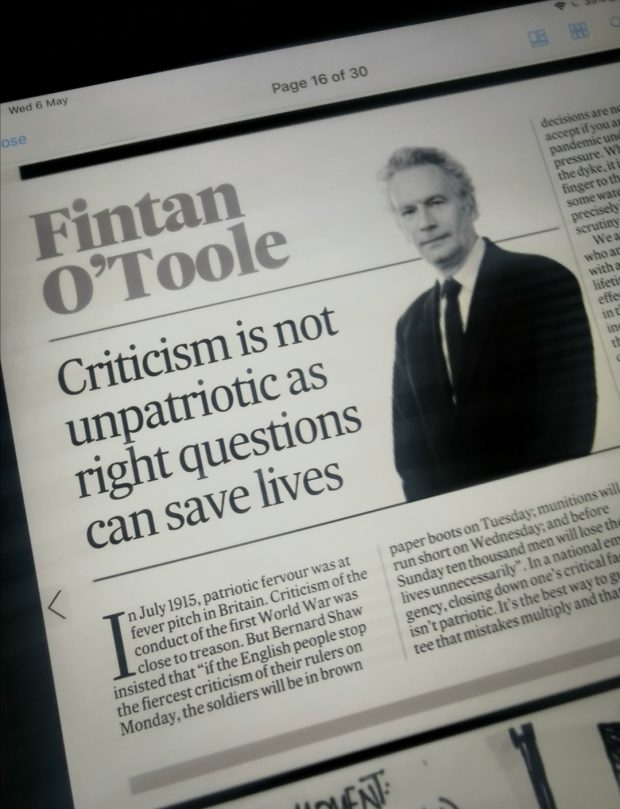 1:48pm: I break off from working on yesterday’s diary entry and read Fintan O’Toole’s Irish Times column. “Citizens have, for the most part, behaved very well. The consensus among political parties has been impressive. The Taoiseach – admittedly with the inestimable advantage of comparison to Boris Johnson and Donald Trump – has exuded authority. But that authority cannot be taken for granted. We are coming into a period when nerves are beginning to fray. What has been communicated in a slow, staged opening is much more complex and nuanced than the simple message in March to lock the feck down.”

He continues: “Questions, especially the awkward ones, save lives. The task of restarting society and the economy while maintaining safety is one of the most difficult the State has ever faced. No group of experts, however distinguished, and no cohort of civil servants, however capable, can manage it alone. It demands the mobilisation of the widest possible range of knowledge and insight. It will not be achieved if we do not make room for those vital words ‘Why?’ and ‘On the other hand…’” The Washington Post’s slogan, ‘Democracy Dies in Darkness’, comes to mind soon after I’ve finished reading the column.

2:50pm: I’m just off the phone after a great chat with one of my oldest friends. He was one of two old primary school mates of mine who persuaded me in my mid-teens to go running with them in the colours of Ring/Old Parish Athletics Club. It remains one of the best decisions I ever made. Running became the sport in which I enjoyed the most individual success, while also enjoying some fantastic team successes along the way. It also brought West Waterford into my life in a way that nothing had previously. It’s a part of the world I love deeply and I remain thankful to this day for my friends’ powers of persuasion. Incidentally, another old school mate was responsible for my entering the world of musical theatre when I was 17, around the time I was at my athletics best. I too owe him a great deal. More than he’ll ever realise, truth be told. Life has been varied, interesting and occasionally wonderful. How lovely to write that and truly mean those words.

3:27pm: I’m finding the pace of government formation frustrating. I think most of us are. But I find some of the protestations being made about the process pretty baseless.

2: The whining over a TD/outgoing minister being ‘elected on the fifth/sixth count’ and so on: newsflash, it doesn’t matter what count you’re elected on. The key thing is getting elected. The only thing is getting elected. Take retired TD Maureen O’Sullivan, for example, a dedicated parliamentarian and a well-liked servant in the Dublin Central constituency she served for 11 years. In 2016, she was elected on the 11th count, having won 1990 first preferences, about 1500 less than what Mayor John Pratt won for Labour in Waterford last February. She regained her seat thanks to transfers, as most of our TDs do every general election. Thus, she retained her mandate to represent her area. It’s not that hard to figure out. Really.

3: Nobody won the general election. The idea of the ‘popular vote’ being referred to in an Irish context is novel and while Sinn Féin had every right to be exultant by their remarkable performance, they didn’t win the election. Nobody did. Fifty per cent plus one wins Irish elections (not so in the American Presidential system, granted) and I doubt if there will be a time again soon when a single party governs this State.

4: This one still appears to catch out a lot of punters. The people elect the Dáil. The Dáil elects the Government. Facts are sacrosanct. Mathematics tells no lies. Once you fly a flag for any party and unequivocally declare your partisanship, that particular logic appears to mostly fly out the window. Strange, that. 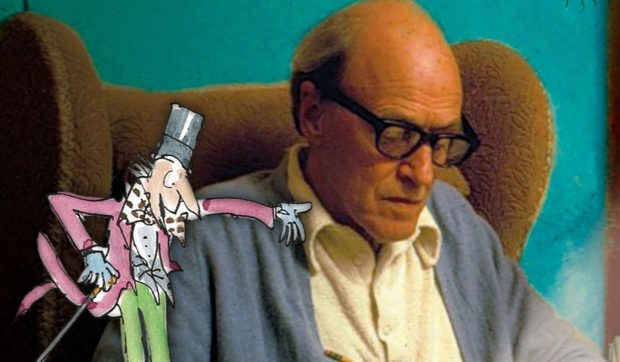 Roald Dahl remains one of my literary heroes.

6:58pm: A quote of Roald Dahl’s makes for suitable inclusion in my latest handwritten letter. It applies as much to you and I as it does to the recipient of my latest despatch. “You must have stamina. In other words, you must be able to stick to what you are doing and never give up, for hour after hour, day after day, week after week and month after month.” 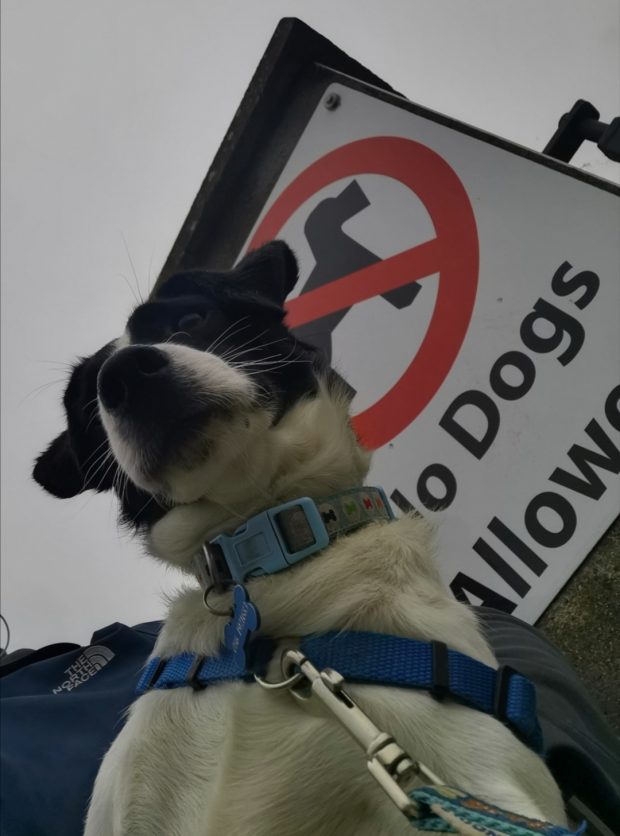 Another lively evening walk was had with Buddy!

7:40pm: I bring Buddy with me on a solo mission to the post box at Ballygunner. He is a lot easier to handle on his own than he is when I also have Zippy in tow. I thoroughly enjoy my time with the little guy. It’s a grey but fine evening nonetheless. 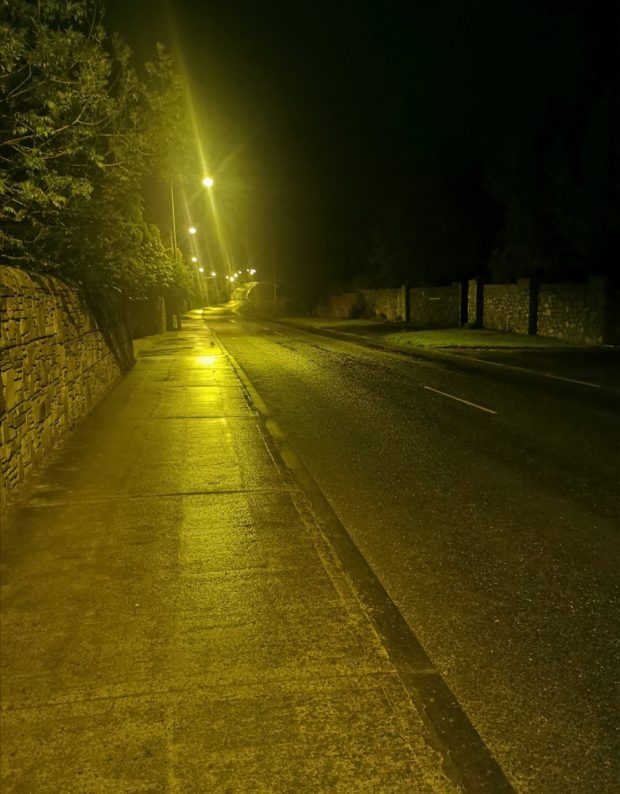 I’ve run five kilometres tonight. I’ll jog one more before I get home.

10:49pm: I’ve emptied the lungs over five kilometres and grind to a halt near Williamstown Glen in a time of 26 minutes 48 seconds according to my newly installed Nike Run app. I got through the first 1.6 kilometres (a mile in old money) in 7:55. I’ve run two sub eight-minute miles two nights in a row and it feels great. I jog the rest of the way home at the end of a loop in which I saw seven other people out in mildly damp conditions. I’m invested in running again. It remains the best medicine I’ve ever taken. Home, tea, a book and good company beckons. What more could any 40-year-old man ask for?