ON THE SPOT: Liam Gallagher 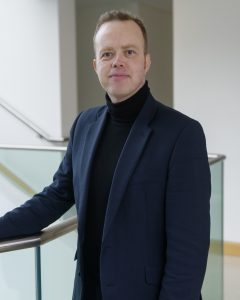 LIAM Gallagher (48) is a cancer researcher, originally from Lismore Park but now living in Dublin. His parents, Michael (RIP) and Anna, moved out to Ballinakill in the 1990s. He currently is Director of the UCD Conway Institute, one of Ireland’s largest biomedical research institutes. As Professor of Cancer Biology, he leads a team of researchers focused on finding better ways to diagnose and treat cancer patients. He also co-founded a molecular diagnostics company, called OncoMark, which has created a new test that can aid breast cancer patients in avoiding chemotherapy.

Life in a day
Prior to Covid-19, I would normally go to UCD after dropping my youngest daughter to school (avoiding the vagaries of Dublin traffic). Most of the day is spent having meetings, responding to emails and trying to get some time to write/edit. I like having a bit of banter with the people I work with. I would normally travel a fair bit (conferences and seminars), but this is not on the cards at present due to obvious reasons. At the moment, I am working from home, trying to keep the cancer research side going, while also indirectly assisting with ongoing SARS-Cov-2 virus testing. I am used to working wherever my laptop is, although the Zoom meetings in my shorts are getting a bit tiresome! Bringing the dog for a walk and queueing for 1-2 hours outside Dunnes Stores are the current highlights of my day.

What school did you go to?
Oddly enough, initially the Mercy Convent (ostensibly a girls school). My sister, Caitriona, went there and they accepted boys up to 2nd Class. After that, I ventured into Mount Sion CBS, to follow my father’s footsteps.

What teacher do you remember most vividly?
I remember two teachers very well, both whom taught at the secondary school. Mr Welsh, the Biology teacher, was an interesting character. I remember him having a habit of coming up behind you during class with a dried out rabbit leg with tendons still attached – pulling on the tendons, he gained great pleasure in the rabbit leg kicking your ear. He was also deadly during the Students versus Teachers Football match (I remember distinctly a twisted around foot!) and had a fondness for bringing roadkill into class.
Mr Farrelly, the English teacher, was actually quite inspiring (no, I am not being a lick arse!). One of my classmates was a Stephen King enthusiast and had a talent for writing horror stories. I tried to compete with him one time but ended up with the most flowery piece of crap. Mr. Farrelly gently let me down (C+), but told me in polite terms to cop on and stop bullshitting.

What advice would you give your 15-year-old self?
Don’t write flowery pieces of crap. Don’t think you are Don Johnson out of Miami Vice when considering dress style. Appreciate the people around you.

How do you relax?
I restarted playing tennis a couple of years back in a local club (having played, i.e. messed around, when I was a teenager). It is a nice club without any pretentiousness. Has a bit of a social side also. My son, whose a good chess player, got me into playing the game also a few years back. I like playing it, even though it pains me to lose continually to him.

What is your favourite film and piece of music?
‘Picnic at Hanging Rock’ by Peter Weir. The look and feel of the film is amazing – I love its otherworldly nature. There is one particular scene in which three girls disappear into a recess in the rock face, only one of which is ever seen again – has a particular odd affect down my spine to this day.
I used to be a bit of a Nick Cave fan, but I have a guilty pleasure which is ‘Wonderful Life’ by Black.

When was the last time you cried?
I guess my last really big outpouring of emotion in this sense was when I heard my father had died. My older kids had just come back up from Waterford having visited him in hospital (he was dying of advanced cancer). That day, I was doing a fearful task, i.e. attempting putting an Ikea bunkbed together. I heard from my sister that he had passed away and I lost the rag a bit, I must admit. Ran out to the washing room and balled like a baby. My wife and kids tried to console me the best they could. His passing was a bit of a sea change moment for me to be honest.

What has been your happiest moment of recent times?
My happiest moment in recent times was the Choirs for Cancer 2020 event held in UCD, as part of World Cancer Day on February 4 this year. It was the second such event and we had 10 choirs participating from all over Ireland and over 700 attendees. Miriam O’Callaghan and Marty Morrissey were MCs for the event, which I organised together with some close colleagues and friends. This includes other ‘A-team’ members: Colette Kearney, Bob Browne and Joyce Carroll. We also had some fantastic and inspirational speakers on the day, including Stephen Teap, Siobhan Freeney and John Wall. I have also become a groupie now for Mount Sion Choir, and look forward to their weekly Facebook Live sessions on Thursday nights.

Do you pray?
Not really anymore. I used to get down on my hands and knees etc. as a child, on occasion. I guess I turn to a type of prayer during exceptionally hard times. I don’t follow my Catholic upbringing, but believe in some sort of higher power, whatever that is.

What is your biggest fear?
Something bad happening to my family. Apart from that, I have a regular dream of a tsunami hitting Tramore and I am running away from it (with family in tow). Watching ‘Freud’ on Netflix at the moment – wondering if my dream suggests anything.

What is your most treasured possession?
My laptop and lefthand side of our couch – I am very protective about both. I am also a hoarder. My wife is a big fan of Marie Kondo and regularly tries to dispose of my ‘assets’ without me knowing.

What is your favourite thing about living in Waterford?
I live in Dublin, but my mother still lives in Waterford. I am a bit fed up about not being able to visit her (due to current crisis), but stay in touch daily by phone. She has received great support from her neighbours and the community there is fantastic. When staying in Waterford, I really like to head to Bunmahon.

If you could change one thing about Waterford, what would it be?
Since my time as a youth until now, a lot has changed for the positive in Waterford, at least from an external perspective. The Waterford Walls initiative, Spraoi, Greenway etc. have all provided richness to the lives of people in Waterford. If I had an ability to influence matters politically, I would like to see more national investment in Waterford, particularly for University Hospital Waterford.