Diary From A Social Distance: Wednesday, May 6 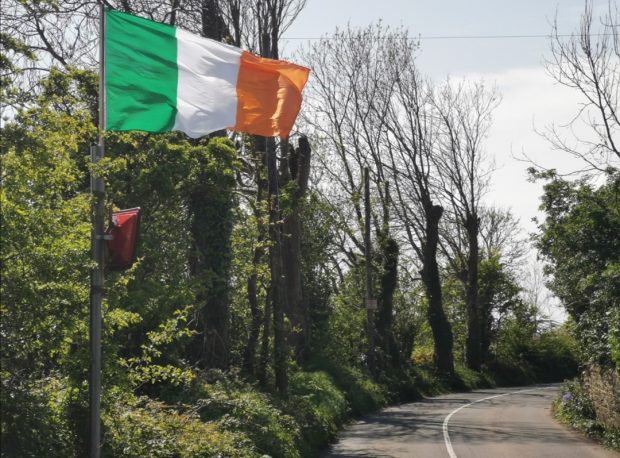 Wednesday, May 6, 8:47am: Remarkably, I awake just one minute earlier than I did yesterday, having once again slept for over seven hours. My eldest nephew turns 18 today. My Dad would have been celebrating his 72nd birthday. There were a few family members in last night’s dream(s) and Dad was among them. I was picking raspberries on a hill above Clonmel in another, in the presence of delightfully curious company. These were happy dreams, incredibly vivid too. I don’t know if they meant anything whatsoever but I’m glad that I wake up remembering them. Faces and places I know and love well mean a great deal at the moment.

9:26am: I turn to the letters page of The Irish Times for some levity before I get cracking on the transcription of a two-part interview with Waterford teacher John A Brennan, who has been based in France since 2003. Ray Tyrrell of Stoneybatter writes: “My business English students have long pondered the proper ending to a business letter to convey the right tone. Yours sincerely? Yours faithfully? Kind regards? This matter has now, alas, been universally rectified. Stay safe.” On a tenuously connected note, Baldoyle’s Philip O’Meara comments: “The daily Covid-19 briefings in Northern Ireland have two sign language signers – one signing in Irish sign language and one in British. Surely a case of tiocfaidh ár lámh!”

11:47am: I file a piece based on an interview with City & County Mayor John Pratt, who signals his intention to run in another general election if the Labour Party puts its trust in him. Having gained 3498 first preferences in the February poll, it would be a surprise to me if new leader Alan Kelly didn’t give the Tallow native the nod to run again whenever we’re back at the polls. 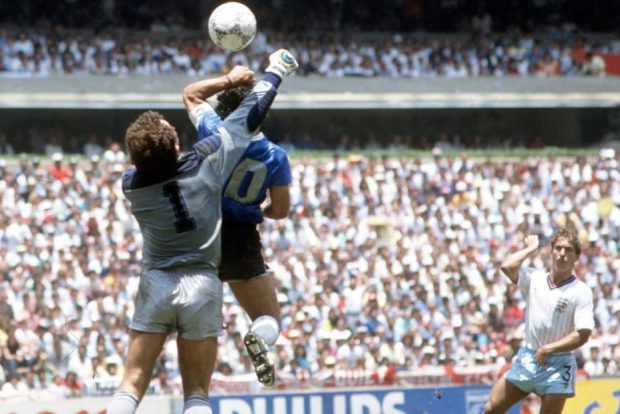 Diego Maradona’s ‘Hand of God’ goal against England in the 1986 World Cup, remains a topic of regular discussion.

12:48pm: After something unexpected required my attention, I get the dogs out for a walk a little later than usual and as a result bring them for a slightly longer ramble. In addition, transcribing a lengthy interview remains a pretty time-intensive business but I really needed to crack on with the John Brennan copy and I’ve made decent inroads on that front.

On a glorious afternoon, I pass by some recently discarded rubbish outside a nearly completed house but my disgust with whoever did this is tempered by a superb ‘Second Captains’ interview with Terry Fenwick, reflecting on England’s infamous 1986 World Cup Quarter-Final defeat to Argentina.

To the uninitiated, this was the match in which Diego Maradona – by some distance the world’s best player at the time – used his hand to ‘score’ his team’s first goal before producing the tournament’s greatest ever goal thereafter.

Fenwick, speaking from Trinidad, produces a belter of a conspiracy theory regarding the fate which not only befell Perfidious Albion at the Azteca Stadium that sweltering afternoon – but well beyond that too. “When you look at the English sides over the years, we’ve had big Sol Campbell scoring a goal from a corner (against Argentina in the 1998 World Cup) – disallowed for a foul that nobody saw. We’ve had a succession of decisions that have had us thinking what the hell is going on here? Is it (that) everybody is up against the English FA – we can’t win anything since ’66. English fans have been put through that since ’66. We’ve been paying for that…we’ve had too many decisions going against us, against one national side that I just think it’s incredible. I don’t believe in coincidences. I think something’s gone on there. The world, in 1966, when we won the World Cup in England, at Wembley – was the ball over the line or not – everybody holds that against us.” Fenwick, unfairly from this juncture, never played for England again after Mexico ’86. English goalkeeper Peter Shilton (standing at six feet) allowed himself to be outjumped by Maradona (seven inches shorter) for that controversial first goal. If anyone needed dropping after that World Cup, it was Shilton. 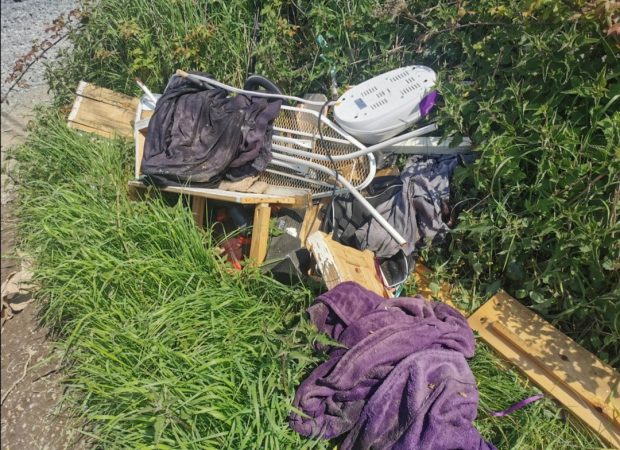 Some recently discarded rubbish on one of our regular walking routes.

2:17pm-5:45pm: I keep transcribing my John Brennan interview while sorting out some copy for the website. It feels like the day has got away from me a little.

6:24pm: An intriguing piece about the handshake accounts for most of page 15 in my latest edition of The New Yorker, which popped through our front door seven hour previously. Apparently, writes Micah Hauser, it’s been around for at least 2,800 years but “died alone, last month, in quarantine”. He writes: “In ‘Primary Colors’, the author, Joe Klein, calls the handshake ‘the threshold act, the beginning of politics.’ Rabin and Arafat, Reagan and Gorbachev, Nixon and the King of Rock and Roll, all went palm-to-palm. The US President, according to one estimate, shakes hands with sixty-five thousand people per year. In 1907, President Teddy Roosevelt, known for his ‘pump handling’, shook more than eight thousand hands in a single afternoon. Afterward, his biographer wrote, he went upstairs to ‘scrub himself clean’.” Exactly a year ago, both Darren Skelton and I interviewed Leo Varadkar at the Broadcast Centre. The Taoiseach’s handshake was weak wristed. It’s hardly a means of defining anyone, of course, but I’ve always been a fan of a strong handshake. But it’s now a greeting I may never extend to anyone again.

7:10pm: I bring Buddy and Zippy out for another walk on the quieter country road behind our estate, a route which clearly agrees with the more excitable Buddy. It’s good to stretch the legs following a sustained period of sitting.

8:15pm-10:22pm: I’m a lot later in assembling yesterday’s diary entry than I’d like to be. Nonetheless, once it’s filed and posted, a familiar sense of accomplishment washes over me. My working day is now officially over. 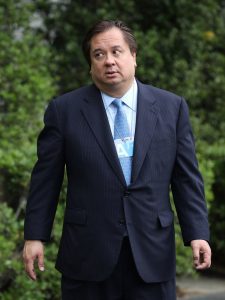 George Conway, one of Donald Trump’s most prominent US conservative critics.

11:16pm: The legs need a rest from running tonight so I do a little more reading instead, turning my attention to a Washington Post opinion piece by George Conway, husband of Kellyanne Conway, who is Counselor to President Trump.

“Americans died from covid-19 at the rate of about one every 42 seconds during the past month,” he writes. “That ought to keep any president awake at night. Not Donald Trump.” Mr Conway was subject to a Trump Twitterstorm overnight following a television commercial which the columnist played a part in devising.

“In a four-tweet screed, he attacked me and my colleague at the Lincoln Project as ‘LOSERS,’ ‘loser types,’ ‘crazed’ and ‘a disgrace to Honest Abe.’ About me, he said, ‘I don’t know what Kellyanne did to her deranged loser of a husband, Moonface, but it must have been really bad.’” The pathetic schoolyard name calling underlines, by his own words, that Donald Trump is unfit to organise a raffle let alone sit in the Oval Office.

“Trump’s lying, his self-regard, his self-soothing, his lack of empathy, his narcissistic rage, his contempt for norms, rules, laws, facts and simple truths – have all come home to roost. Now he sees his poll numbers fall accordingly, and lashes out with ever-increasing anger. For deep in his psyche he knows the truth. Because he fears being revealed as a fake or deranged, he’ll call others fake or deranged. Because he fears losing, he’ll call them losers instead.” 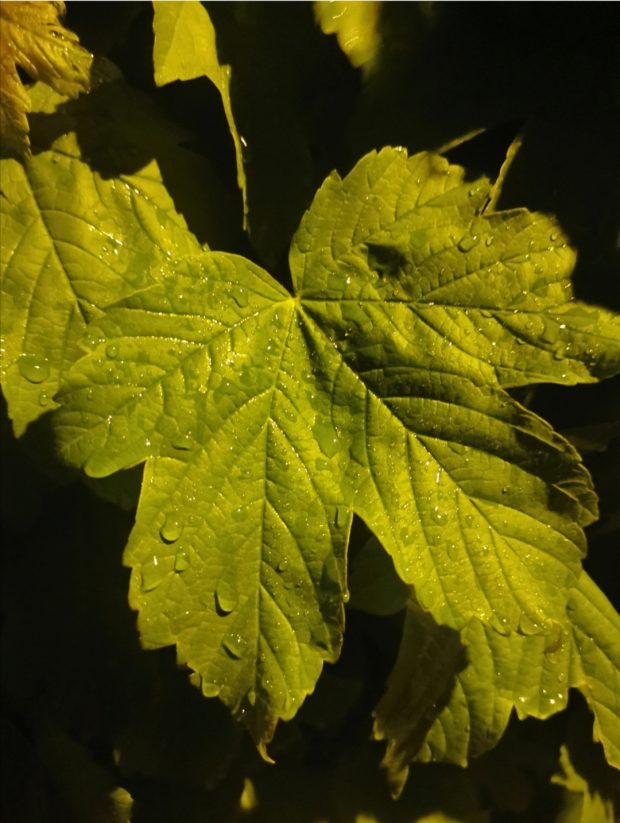 The rain begins to fall in Williamstown.

11:48pm: We bring Buddy and Zippy off for their final walk of the day as the rain begins to fall in Williamstown. I’ll be aiming to get that lengthy piece with John Brennan filed for the website tomorrow before I get to anything else. Beyond that? Well, I’ve plenty to keep myself occupied – and that’s a good way to be almost two months into the application of this public health emergency/socio-economic handbrake.