Diary From A Social Distance: Thursday, May 7 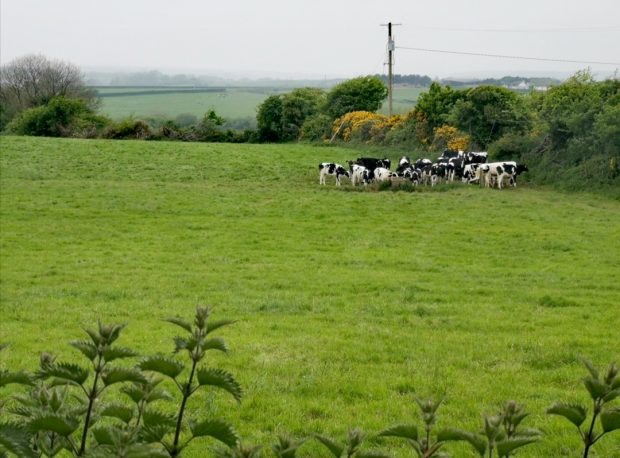 Thursday, May 7, 9:09am: After a night in which my Fitbit sleep stats tell me I was restless 26 times – I was certainly awake around 4am alright – I’m out of bed but don’t remotely feel like someone who was restless 26 times last night. I reach for ‘The Daily Stoic’, a constant presence in my workspace and turn to today’s date. Epictetus tells me: “God laid down this law, saying: if you want some good, get it from yourself.” I couldn’t agree more. The accompanying commentary states: “Here is how you guarantee you have a good day: do good things. Any other source of joy is outside your control or is nonrenewable. But this one is all you, all the time, and unending. It is the ultimate form of self-reliance.”

For all the talk of wellness, for me there’s not enough talk of resilience, of the importance of having a quiet word with one’s self regularly in an attempt to keep yourself on the straight and narrow. And this perspective ought to be dispensed without a celeb charging a secondary school €3,000 for the privilege to tell a hall full of teenagers just that.

There are many people among us with mental illness, some still suffering in silence. There are also people out there with low mood, stuck in a rut, resigned to where they currently find themselves. There is a difference between the aforementioned, though, and those with low mood have a greater level of autonomy that they realise during those darker moments. The basics help when it comes to building resilience: regular sleeping hours, good nutrition, plenty of water and regular exercise. Those who require medication to get through each day should be encouraged and supported. Those who don’t need it should attempt to address the basics, set out a schedule of no more than 28 days and see where they are come the end of that particular cycle. We can draw something positive from ourselves. The first step on that path is to try it. 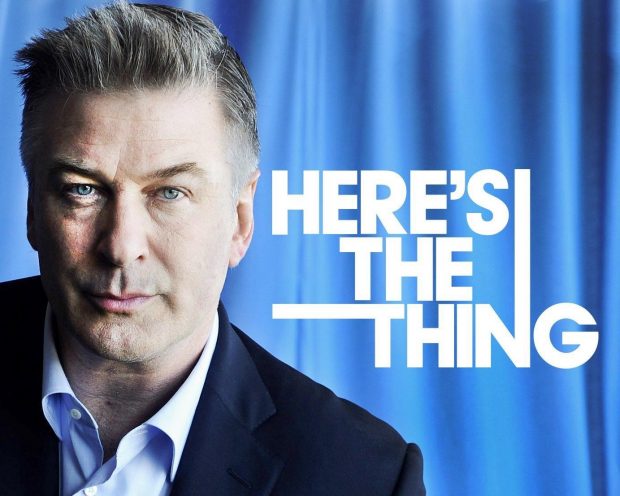 Alec Baldwin’s ‘Here’s The Thing’ has been a recent and welcome podcasting discovery.

10:20am: It’s a grey morning. I’m off down the lane with Buddy and Zippy again and there are plenty of friendly ‘hellos’ exchanged as people pop out to get some fresh air. I listen to Alec Baldwin on his ‘Here’s The Thing’ podcast interviewing photographer Pete Souza about his years snapping both Ronald Reagan and Barack Obama and it’s utterly absorbing. “The odds of someone getting two calls to work at the White House are pretty slim,” Souza tells his interviewer but the quality of his work suggests otherwise. Baldwin is wonderfully inquisitive and exudes warmth. He’s a natural host whose enthusiasm for his subjects is clearly unforced. I love listening to good stories and Baldwin’s back catalogue is full of them: James Caan, Carly Simon, Barbara Streisand and Brian De Palma to name but a few.

10:46am: As someone whose weight has fluctuated since I stopped playing field sport regularly around eight years ago, the only person whom I’ll ever poke fun at about their weight is the fella I see in the mirror every morning. I’ve shovelled food into me at times and the only person who has made me do that is me. It’s not society, it’s not the pressure of my job, it’s a conscious choice that I’ve made. It’s all down to me.

I’m 22 pounds lighter than I was 17 months ago. I’ve probably got another 10 pounds to lose if, say, I wanted to run a six-minute mile or have a 34-inch waist again. Adele has lost a great deal of weight and it’s made a lot of headlines today. I don’t see why it’s news to be honest but good luck to her. There’s no controversy in someone wanting to be healthier and feeling better about themselves. I’ve been better when it comes to food in the past three weeks than I was in the three weeks before that. I know it’s someone I’ll have to keep working on, but I know what I weigh ultimately comes down to choices that I make. 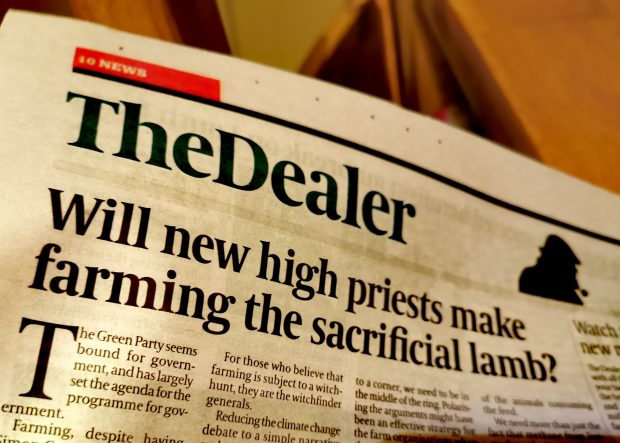 1:37pm: ‘The Dealer’ in this week’s Irish Farmer’s Journal writes: “I see the furore over Keelings flying in workers to pick fruit for the summer harvest resulted in just 78 people being eligible to do the job, out of nearly 500 applications locally. I read that nearly 200 didn’t respond when contacted and over 200 failed initial screening. Meanwhile in the UK, I read last month that only 112 out of 50,000 people who applied actually took up roles picking fruit and veg.” I spent four summers working for Iverk Produce as a teenager between 1995 and 1998. In total, I worked in the fields of South Kilkenny, South Tipperary and very close to home in Portlaw (directly across the road from home in one case on the cabbage crew) for 13 months. They remain the most work intensive days I’ve ever had. It was the best education I ever received and if I had to go back to it tomorrow, I would. Such work shouldn’t be beneath anyone.

2:55pm: I finally post my 3,000-word long read piece about Daisy Terrace’s John Brennan; an English teacher based in the French city of Amiens. I’ll trim it down to 800 words for next Tuesday’s print edition and file that later on. I spent longer on John’s story than I expected and once I’ve posted it, I spot a few glitches in the copy and make the appropriate edits. It’s the longest single piece I’ve written for the Waterford News & Star thus far and I’m very pleased with it. The joy of web-based writing is that you can go that little bit deeper than you can in print. At a time like this, I’m glad of the opportunities the internet has provided me with from a writing perspective.

3:52pm: I take a few minutes away from the laptop to flick through my Irish Independent e-paper. Eilish O’Regan has a fascinating, detail heavy Covid-19 piece on page six. “Heart disease is the most common underlying health condition in coronavirus patients admitted to hospital intensive care units across the country, it emerged yesterday. An analysis of the first 327 of the sickest patients with the virus revealed that half (165) had chronic heart disease. Chronic respiratory disease was diagnosed in 76 patients and another 74 had diabetes. Another 53 were obese and 34 had asthma. A further 31 suffered from cancer and 20 had chronic kidney disease.”

5:15pm: I have a wide-ranging chat with Dr Mark Rowe which goes off in any number of directions, which is just what a reporter wishes for every time they pick up the phone. If I ever lecture journalism students again (which I did from 2006 to 2008 at Dublin Business School), two of my main nuggets of advice would be: 1 – Read a lot, and then read some more and 2 – Every time you arrange an interview, aim to elicit more than one story from that particular conversation. Put as much value into your time as you can.

8:45pm-10:17pm: I work my way through yesterday’s diary entry. The good habit of filing this particular piece earlier each day in order to free up my evening has fallen by the wayside these past few days. I’ll aim for better tomorrow. I make a promise to myself that I’ll be more disciplined about all this next week. 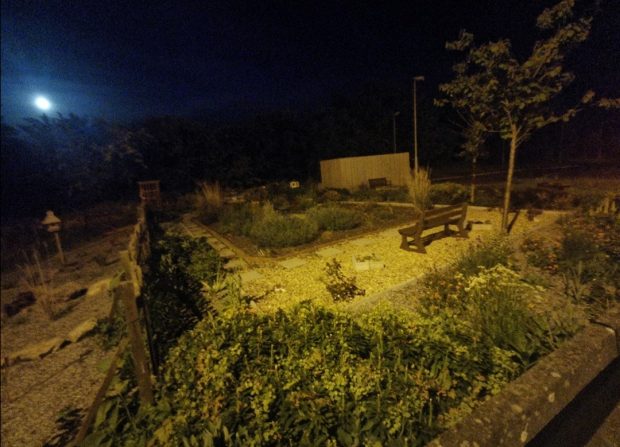 The Solas Garden, the end point of tonight’s anti-social run.

11:04pm: I end an interval run on my regular loop having reached the 4.5-kilometre mark in 24 minutes and 30 seconds. I’d run the first 3.2k in just under 16 minutes, during which I clocked a mile in seven and a half minutes. I’m thrilled to be moving this well, the fastest I’ve been for almost a decade but I must not get into the habit of comparing notes with the previous run and then racing myself every night. On a dry night, I pass 14 pedestrians on the loop. 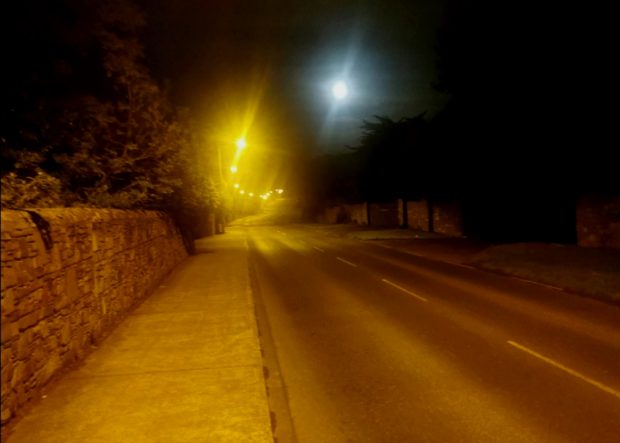 A snap which does the ‘Flower Moon’ no justice whatsoever!

11:19pm: After meeting herself, Buddy and Zippy, I cross the Williamstown Road (with Buddy) to take a photo of the Full Flower Moon, the last ‘Supermoon’ of 2020. According to my ‘Star Walk’ app, this is also the third closest the Moon will be to Earth this year and the third largest full moon of the year. “On May 7, its distance from Earth will be 361,184 km, which is further away than the March and April moons were,” states Star Walk. “Although Supermoons appear about 7% larger and about 15% brighter on the night sky than typical Full Moons, this difference is hard to see with the naked eye of a casual observer.”